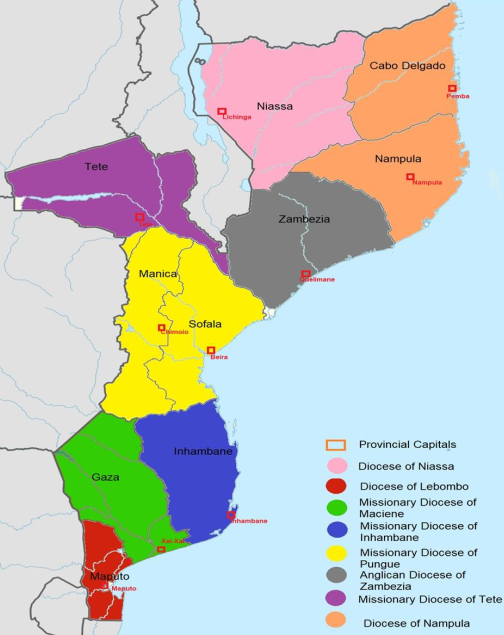 Exciting plans to triple the number of dioceses in Mozambique and Angola and inaugurate a new, Portuguese-speaking Province of the Anglican Communion were outlined at this year’s meeting of ACSA’s Provincial Standing Committee.

Bishop Carlos Matsinhe of Lebombo reported to PSC that the legislative bodies of the four existing dioceses – those of Lebombo, Niassa and Nampula in Mozambique, and the Diocese of Angola – supported the proposal for a new Province, made by Archbishop Thabo Makgoba at Provincial Synod last year.

“… [A]s bishops, we have spoken with the laity and clergy of our dioceses and we are keeping the discussion on this matter high in our parishes and congregations,” Bishop Carlos said in his presentation.

“…[I]n each area to become a new diocese we have put in place Task Force Committees to work out the details as required by the Provincial guidelines.

“All four bishops and their dioceses feel very much encouraged by the last Synod of Bishops that affirmed and endorsed the process. This encouragement carries a deep spiritual and missiological intent.”

Bishop Carlos added that the church in the two nations needed to disciple more Anglicans.

“Our Anglican Church is already recognized by our civil society and authorities as a serious partner in the areas of peace building, public health and poverty eradication…

“This recognition poses a challenge of growth, effective presence and relevant witness which we cannot do well from a distance. We need more bishops to bring down their episcopal ministry to where many congregations are.”

He noted that the existing four dioceses in Mozambique and Angola covered huge distances, making travel time-consuming for their bishops. Citing an example of the difficulties, he said traversing the Diocese of Niassa from east to west involved travelling through Malawi.

He said that five new dioceses in Mozambique and three in Angola are proposed. “The province will start with 12 bishops… Of course this is going to be a long journey, which we are asking you to let us start, and pray for us.”

In a resolution proposed by Bishop Carlos and seconded by Bishop Andre Soares of Angola, PSC supported and endorsed the vision. An application for a new Province has to be approved by the wider Anglican Communion.