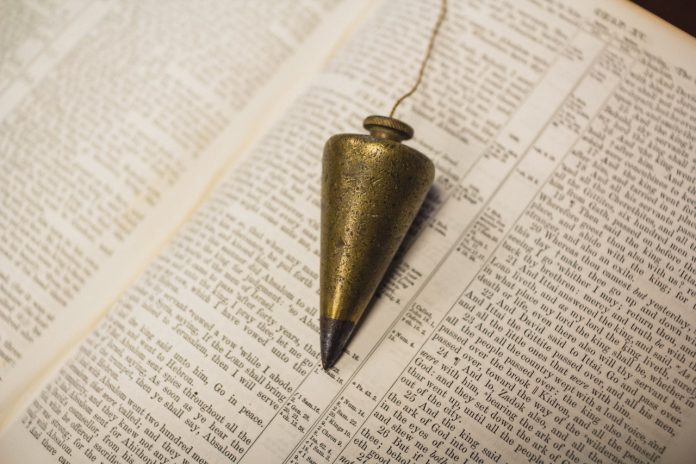 Dennis Lennon, Turning the Diamond, begins his examination of verse 4 by warning against a distortion of the previous verse about soul- and heart-prayer as being circumscribed by the “small circle” of immediate concerns, family and a few friends.

Our sympathies escape the pull of the small circle only with great difficulty, and then only if they come under the sway of a new, wholly superior dynamic. Hence the timeliness of this later metaphor. The challenge in this exploration will be to bring our present vision of prayer, its range and scope, to be scrutinized by the unusual idea of prayer as “the Christian plummet sounding heaven and earth.”

Imagine you are located at the mid-point between heaven and earth. You are hang-gliding there, perhaps, or magically floating. In your hand you have the gift of prayer in the shape of a plummet, a plumb-line, the sort sailors in small boats use to “sound” the depth of water under the keel. Your plumb-line/prayer-line possesses several unusual properties: first, it can go vertically up, lead first, to sound height, as well as in the more usual direction, down, to gauge depth. Second, its string is limitless in length. And third, it is a thinking plummet. Just let it go, down or up, into any subject and it will run to the farthest limits. It is a “getting-to-the-bottom-of-things” plummet.

By this picture George Herbert suggests the real business of prayer: penetration into the heart and essence of things, into origins and root-causes of whatever prayer is concerned with; like a friend who, if you mention a headache, or lack of money, will not leave it there but wants to know the full story in order to help. “Sounding-prayer” is quite incapable of being superficial. It isn’t in its nature to deal with the outside of things. It transcends, or transfixes, the merely material and visible, touchable world to reach into its centre where the outcomes are decided….

Christ is the prayer sounding heaven and earth. At their very best and penetrative, our prayers merely ride on his. He emerged with his findings, which he presents in the form of “The Lord’s Prayer.” All that the world yearns for in her deepest heart, is answered by all that heaven longs to bestow of herself….

“On earth as it is in heaven” amounts to nothing less than God’s practical reign among us. Whatever practical matter engages our prayer, and however we frame our petitions, we are asking for the Lord to hold sway in that situation. We can ask for nothing greater, we are not permitted to ask for anything less. Jesus said, “This, then, is how you should pray…”

Therefore sounding-prayers, which reach to the heart and essence of heaven and earth, must go behind the screens of the senses to see by faith what is the truth of things. The Book of Revelation goes behind visible history to tell the story from the perspective of the kingdom of God. “Revelation” is world theatre; the unveiling of Jesus Christ as Lord of history and of current events. The visible story as experienced by Christians living under the Roman Imperial authority in first-century Asia Minor was bleak. Persecution and the real possibility of cruel martyrdom were boiling up over the heads of the young churches. Yet every Lord’s Day they went to celebrate the fact that Jesus is Lord over all, including Caesar. Would their vision of Jesus be exalted and compelling enough to keep them faithful to him regardless of the consequences? Remember, a simple action like a pinch of incense into the flame at Caesar’s shrine could save a Christian. Sincerity was not required! The series of visions, which is the Book of Revelation, was given through John to convince the churches where the truth lay. It took them, and it takes us today, behind the scenes. Nothing could more strengthen and excite our prayer-life, as well as increasing its scope and range, than meditation in the visions of “the throne” in Revelation chapters 4 and 5….

The stunning throne-vision compels our prayer, up and out, in intercession for the peoples of the world. The extraordinary upheavals and movements of peoples around the globe are as much news of God as they are world news. The scroll in the hand of the One on the throne is open and streaming into the life-blood of the nations. God is not their puppeteer. He allows the nations their freedom while drawing all things to serve his purposes. “The nations” are the theatre of his activity and the vehicle of his purposes. Grasping the significance of this, we attend to world news more carefully and prayerfully; we become habitual world-watchers, more global-minded…. But if world affairs are not significant in our thinking and praying (not reflected in our church programmes) we imply an empty throne or a sealed scroll, an absentee or powerless God, or that “salvation” is essentially a disembodied “spiritual” programme floating clear of the messy round and tumble of “the nations.” In which case we are back in the happiness of the “small circle” fallacy.

But sounding-prayer will, by its nature and by its dynamic connection with “the throne” of Revelation visions, make us cosmic people.

May I conclude with a modest reflection on this theme in a time of worldwide plague. Despite the efforts and assurances of the experts, no one know precisely how this pandemic will end and what enduring social, economic and political effects it will have on our life or that of our nation and the nations of the world. What we do know from Scripture and Christ’s Reign is that God is the Lord of history even through war, famine, pestilence and death (Revelation 6:1-8). We also know that He calls us to pray and responds to the prayers of His people in distress, even if the answer is to wait a little longer (verses 9-11; cf. the BCP Litany). Our call today may be to plumb the significance of this time of trial in prayer even as we also intercede for those in authority and for workers on the ground who are responding to the exigencies of the crisis.

We have now finished the first stanza of Herbert’s sonnet and five chapters of Lennon’s commentary (again, consider ordering a copy of his book). I hope this first week has been illuminating and rewarding to you, perhaps loosing some of the burdens of prayer while expanding its vision into eternity. This certainly was Paul’s desire when he prayed:

For this reason I bow my knees before the Father, from whom every family in heaven and on earth is named, that according to the riches of his glory he may grant you to be strengthened with power through his Spirit in your inner being, so that Christ may dwell in your hearts through faith – that you, being rooted and grounded in love, may have strength to comprehend with all the saints what is the breadth and length and height and depth, and to know the love of Christ that surpasses knowledge, that you may be filled with all the fullness of God. Now to him who is able to do far more abundantly than all that we ask or think, according to the power at work within us, to him be glory in the church and in Christ Jesus throughout all generations, forever and ever. Amen. (Ephesians 3:14-21)

The Church of England’s misguided quest for ‘racial justice’