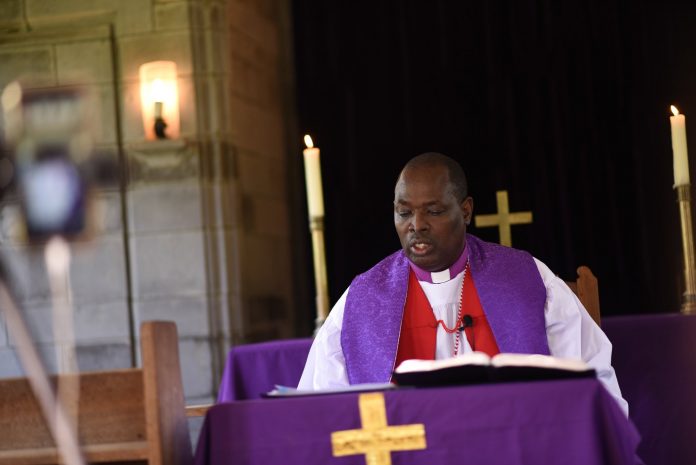 In Faith, we shall Overcome this pandemic, Archbishop affirms in his Special Online Broadcast.

His Grace, Archbishop Jackson Ole Sapit has called upon Kenyans [18 March 2020] to put their faith forth as the Country joins the world in dealing with the dreaded Corona Virus. He said this during a special live broadcast streamed live on his Facebook Page. He drew his sermonette from the book of Isaiah-explaining the Journey of this Book from a place of despair to that of Hope. He encouraged that there was hope for the Nation, ‘in the midst of these challenges.’

Coming at a time when the country is pressed by the worry of a surge in cases of the Virus, the locust invasion among others- the Archbishop said that the Lord will strengthen those who trust in him. He said that such times should remind us of that we are all candidates of God’s support, ‘as we feel weak’. He encouraged everyone to take the necessary precautions to ensure that we stayed safe.
In an earlier statement released on Tuesday, the Archbishop commended the Government for her efforts in addressing the Pandemic. The Primate called upon Kenyans to set aside 10 Minutes Daily from 8:00pm to pray for the Nation. He also directed that Sunday, the 22nd of March, be observed as a National Day of prayer. By Wednesday evening, Kenya had confirmed 7 cases with the global infection rate passing the 200,000 mark. Over 8,000 people have also lost their lives to the Disease, globally.