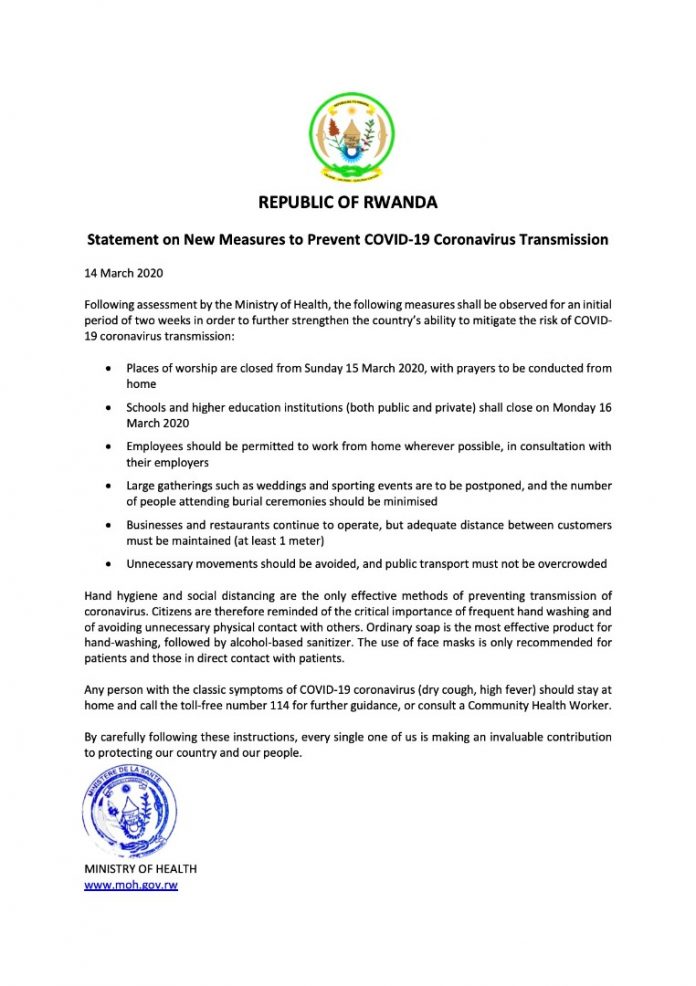 Public worship has been banned in Rwanda for two weeks by the Ministry of Health in response to the first recorded case of Wuhan Flu in the East African nation. On 14 March 2020 the Ministry of Health reported that an Indian national entered Rwanda on 8 March, and at that time displayed no signs of the illness. On 13 March 2020 he was treated for a flu-like illness at a hospital. Testing showed he had severe acute respiratory syndrome coronavirus 2 (COVID-19). The Ministry of Health went on to say the man was “currently under treatment in stable condition, isolated from other patients.”

The Ministry of Health subsequently issued an order stating: “Places of worship are closed from Sunday 15 March 2020, with prayers to be conducted from home.”

“Schools and higher education institutions (both public and private) shall close on Monday 16 March 2020” and “Large gatherings such as weddings and sporting events are to be postponed, and the number of people attending burial ceremonies should be minimized.”

The ministry further stated “Employees should be permitted to work from home wherever possible, in consultation with their employers.”

However, businesses including restaurants were permited to remain open so long as adequate hygiene standards were met and a distance of at least one meter was kept between customers.

Speculation is rife that GAFCON’s 9-14 June 2020 conference for bishops of the Anglican Communion who uphold Lambeth 1.10, sign the Jerusalem Declaration and are in agreement with the Jerusalem Statement, will be postponed due to the global pandemic. Rwanda becomes the fourth East African nation after Kenya, Tanzania and the Sudan to report confirmed cases of COVID-19.