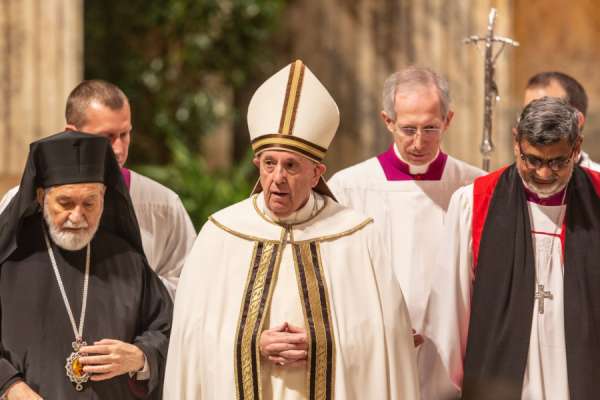 Representatives from Anglican and Orthodox worlds joined Pope Francis at the tomb of St Paul today to mark the close of the Week of Prayer for Christian Unity in Rome.

Francis presided at a vespers service with Archbishop Ian Ernest, the former primate of the Indian Ocean and head of the Anglican Centre in Rome, and Metropolitan Gennadios of the Ecumenical Patriarchate on 25 January at the Basilica of St Paul Outside the Walls.

The Acts of the Apostles speaks to “our ecumenical journey towards the unity which God ardently desires,” Francis said. “From this Week of Prayer we want to learn to be more hospitable, in the first place among ourselves as Christians and among our brothers and sisters of different confessions,” he said according to the Vatican press office.

“Among Christians as well, each community has a gift to offer to the others. The more we look beyond partisan interests and overcome the legacies of the past in the desire to move forward towards a common landing place, the more readily we will recognize, welcome and share these gifts,” the pope said.

The call of Christ is “an invitation not to devote ourselves exclusively to our own communities, but to open ourselves to the good of all, to the universal gaze of God who took flesh in order to embrace the whole human race and who died and rose for the salvation of all,” he said.