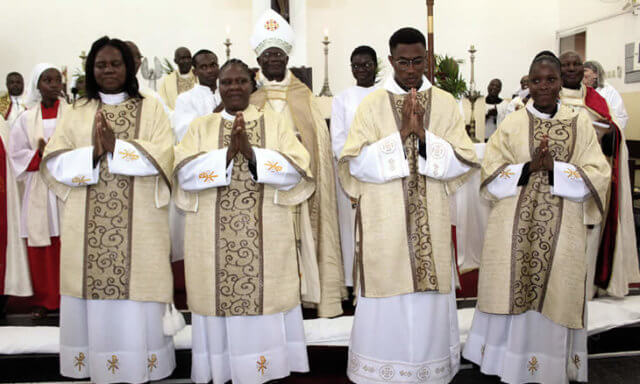 The first Anglican women clergy in Mozambique have been ordained by the Bishop of Libombos. On 7 Jan 2020 the Revs. Joana Chilengue, Lina Maria dos Santos and Fatucha Rosemary were ordained to the diaconate at the Cathedral of St. Augustine in Maciene by the Rt. Rev. Carlos Matsinhe.

The Anglican Church in Southern Africa authorized the ordination of women in 1992, but each diocese was given the discretion of accepting or rejecting the innovation. In 2015 the Maputo synod — covering the southern portion of Mozambique — voted to permit the ordination of women and the three entered seminary  the following year to begin three years of training.

Bishop Matsinhe told MMO, a Mozambiquean newspaper, the ordination of the three transitional deacons was a  “very big milestone” for the diocese as it made plain the church’s appreciation of the ministry of women and lived out the principle of “gender equity that the Bible preaches and we also preach. And, in fact, there was no question of having men and women on an equal footing who could serve God on the altar.”

The bishop went on to say: “We will continue to encourage women to enter the priesthood. The ones we have ordained today are capable of serving the church, and in fact in our seminary we now have nine women and surely these will be next in this path of ordination, which is an irreversible path and will be a gain for the church in general. . We will continue to help those who choose to follow this path, which is good for the church and good for society as well.”