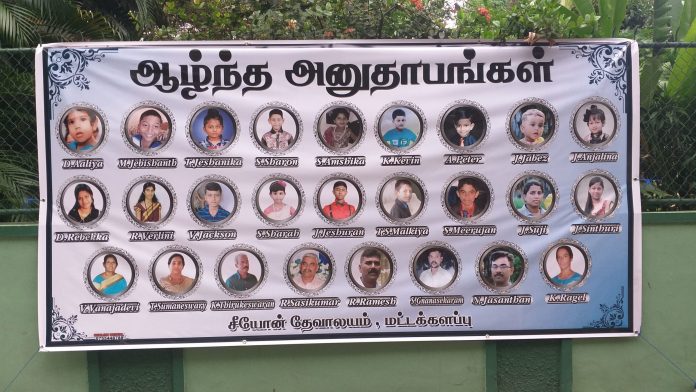 VIENNA (19 December 2019) – In the build up to Christmas, Christian minority groups all over the world are preparing for one of the most important celebrations in the year. In Sri Lanka, communities still recovering from the Easter attacks will take extra precautions.

“Churches celebrate Christmas in a simple manner in Sri Lanka with worship and identifying with the less fortunate. There is a security alert by the police to take extra precaution this festive season as there could be unexpected attacks. They have asked organizations and churches to tighten security. Nevertheless, all churches will have their worship services,” said Godfrey Yogarajah, Deputy Secretary General of the National Christian Evangelical Alliance Sri Lanka and an ally of ADF International.

“There are many victims of the Easter attacks still going through surgeries and other medical needs. For families who lost their children and other loved ones it’s the first Christmas without them. It’s a sad memory as they attend worship this year especially at churches where there were so many dead and injured. Most churches would remember and uphold these families in prayer. Recovery will take some time as especially the trauma and grieving of those who lost their families will be a long process. Psychosocial support is needed. Finally our hope is that God will bring healing and wholeness to this situation.”

On Easter Sunday 2019, churches and hotels were targeted in a series of bombings. The attacks were targeted at Christian communities celebrating the most important day in the Christian calendar. Around 290 people were killed and over 500 were injured.

“Nobody should be persecuted because of their faith. In many parts of South Asia we see a growing threat to religious freedom despite legal safeguards that exist in many countries’ constitutions. In countries like Pakistan, Nepal, Sri Lanka, or India extreme social hostility like mob violence against minorities is encouraged by authorities failing to prosecute the offenders. The Easter attacks in Sri Lanka were a devastatingly clear signal that Christians deserve specific protection and support so that they can practice their faith freely and safely without fearing for their lives. Efforts to document violence and build solidarity among faith communities, goes a long way to reduce systemic violence. The international community could play a decisive role in protecting minorities by making religious freedom a diplomatic priority,” said Tehmina Arora, Director of Advocacy, Asia for ADF International.

The attacks came at a time where the persecution of Christians and other religious minorities has increased in South Asia. Recent reports by various national governments highlight the intensity of global persecution. According to a recent Pew Research Center study, there were incidents of harassment of Christians in more than two-thirds of all countries. A report commissioned by the British Foreign Office that was published in July outlines the persecution of Christians all over the world. It concludes that they are the most persecuted religious group in the world and reveals an increase in the phenomenon.

Recently, the National Christian Evangelical Alliance Sri Lanka was awarded as one of the top ten finalists of the Intercultural Innovation Award. The award by the UN Alliance of Civilizations in partnership with the BMW Group recognizes grassroots initiatives that promote intercultural dialogue. The awarded project, MinorMatters, is a national initiative aiming to promote religious freedom in Sri Lanka. It was chosen for the award from a group of over 1,200 applicants from 128 countries.