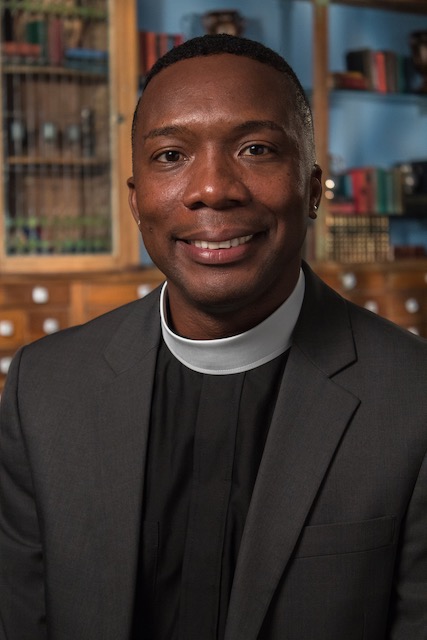 The Episcopal Diocese of Missouri elected the Rev. Deon K. Johnson as its 11th diocesan bishop today at Christ Church Cathedral in St. Louis. He was elected on the first ballot during an election that involved 164 voting delegates. He received 71 votes from lay delegates and 42 votes from clergy.

A veteran Episcopal priest with deep experience in social justice issues and ministry to gay and lesbian communities, Johnson, who lives in Michigan with his husband and two children, has been rector of St. Paul’s Episcopal Church in Brighton, MI, since 2006.

Johnson was elected to lead a community of more than 10,000 worshipers in the Episcopal Diocese of Missouri. Church delegates and clergy members chose their 11th bishop on Saturday during the 180th diocesan convention.

“I am overwhelmed with joy, humility, and gratitude,” said Bishop-Elect Johnson from his home in Michigan to the people of the Diocese of Missouri. “The Holy Spirit has brought us to this day, for such a time as this. I am looking forward to walking with you as we share the liberating love of Jesus. My husband and our family are looking forward to being with you in the new year.”

Johnson will assume the post upon the retirement of the 10th bishop of Missouri, the Right Rev. George Wayne Smith, who has shepherded the diocese since 2002. Smith announced his retirement, effective with the ordination of the new bishop, in April 2018. Johnson was elected by a majority of both lay and ordained delegates to the annual diocesan convention, according to the rules of the convention.

The Rev. Dawn-Victoria Mitchell, president of the standing committee, expressed her joy at the election results. “It’s a very, very exciting day for the diocese. We’ve only had 10 bishops in our 178-year history. And to have this done on the first ballot was really exceptional.”

A veteran Episcopal priest with deep experience in social justice issues and ministry to gay and lesbian communities, Johnson is a native of Barbados who immigrated to the United States at age 14 and found his call to ministry nurtured by parishioners at a church near Case Western University in Cleveland, where he earned his undergraduate degree.

Today’s historic election will be submitted to bishops and diocesan standing committees for their ratification. Once those consents are received, the service of ordination, by which Johnson becomes a bishop and assumes responsibility for the pastoral and administrative work of the diocese, will take place on Saturday, April 25, at St. Stanislaus Polish Catholic Church in St. Louis. Presiding Bishop Michael Curry will be the chief consecrator at the service. A reception will follow at the Polish Heritage Center on St. Stanislaus’ grounds. Media are welcome.