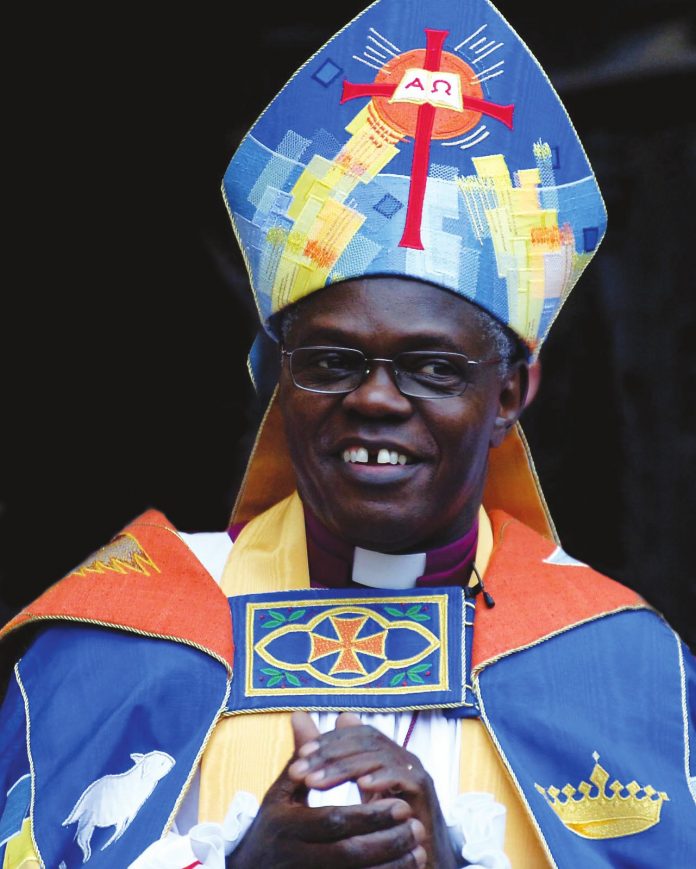 In his Presidential Address to the General Synod of the Church of England last week, John Sentamu, the Archbishop of York, in referring to the issue of human sexuality, had something important to observe about interpreting the Bible:

The kind of disagreement we have is exactly the kind of disagreement one would expect to find in a church where the old habits of reading the Bible consistently and thoroughly, as part of a liturgical pattern or a pattern of private devotion, had broken down. The expectations we have of Biblical literacy – not only of laity but of clergy too – would strike most earlier generations of Christians as sadly low.

It is hard not to say Amen to that! Indeed that is exactly the kind of habits of reading, interpreting, and applying of the Bible which Archbishop Cranmer called for in his Scripture Collect:

Blessed Lord, who hast caused all holy Scriptures to be written for our learning: Grant that we may in such wise hear them, read, mark, learn, and inwardly digest them, that by patience and comfort of thy holy Word, we may embrace and ever hold fast the blessed hope of everlasting life, which thou hast given us in our Saviour Jesus Christ. Amen.

It is the kind of approach affirmed in the Jerusalem Declaration from Gafcon 2008:

We believe the Holy Scriptures of the Old and New Testaments to be the Word of God written and to contain all things necessary for salvation. The Bible is to be translated, read, preached, taught and obeyed in its plain and canonical sense, respectful of the church’s historic and consensual reading. (clause 2)

So far, it seems, the Archbishop and orthodox Anglicans are aligned, but then the alignment fails. The reason it fails is that right from the start he frames his address in terms of good disagreement™. “How,” he wonders, “can people who read the same Bible and share the same baptism come to strongly diverse conclusions about human sexuality?”

The paradigm of disagreement, as he poses it, is a matter of moral equivalence. “Some say this, some say that.” “Some say God made sex for marriage, some say love conquers all.” “Who am I to judge?”

This is not the way the historic church – “where the old habits of reading the Bible consistently and thoroughly, as part of a liturgical pattern or a pattern of private devotion” – has read the Bible. From the beginning until the very recent past, the church has read the Bible in one way, as stated by the bishops at Lambeth Conferences, who “in view of the teaching of Scripture”  upheld the “unchangeable standard” of “faithfulness in marriage between a man and a woman and abstinence” and rejected homosexual practice “as incompatible with Scripture.” (Resolution 66 [1920]; Resolution I.10 [1998].

Surely some revelation is at hand, some brilliant insight that overturns this universal consensus in reading the Bible? What about noted theologians and biblical scholars who have overturned the traditional reading of the Bible? Here again, moral equivalence – “what about-ism” – comes into play. Of course one can find bishops, theologians and scholars who claim new strategies and trajectories to call into question the plain sense of the Bible. One can even find those who (more candidly) say: “The Bible is plainly wrong, Genesis is a relic of ancient patriarchy, Jesus was a Jew of his own time, and Paul was a misogynist.”

As a Biblical scholar, I have been writing about this issue for twenty-five years (e.g., here), and, frankly, I find the “new’ arguments enrolling the Bible in the LGBT movement stale and utterly unconvincing to anyone who looks with an open mind at the plain and canonical sense of Scripture.

The Bible’s teaching on sexuality is not a matter of “six scattered verses”; rather, it is a golden cord beginning in Genesis – God’s creation of male and female in His image, in His ordaining holy matrimony in two sexes-one flesh of husband and wife, in His hedging in sex from temptations to pagan idolatry and fornication, in Jesus’ reaffirming the original aim of exclusive faithfulness of husband and wife, in Paul’s warning against all forms of “fornication” and likening the relations of husband and wife to that of Christ and the Church, and in the Wedding Supper of the Lamb. Oh, and by the way, all this teaching is ably summarized in the Preface to the marriage service in the Book of Common Prayer.

But on the other hand, take the Very Rev’d Professor Martyn Percy, Dean of Christ Church Oxford. Two months ago he wrote: “Does the Bible… Really Give Us a Clear Definition of Marriage?” I am not going to attempt a point by point refutation of Percy’s arguments, as Martin Davie and Ian Paul have already done so. Professor Percy’s odd method of moral equivalence involves setting up straw men and shooting at them. On the one hand, there are the “fundamentalists” for whom Scripture was faxed down from heaven. For them

“the bible is the pure word of God – every letter and syllable is ‘God breathed.” So there is no room for questions; knowledge replaces faith. It is utterly authoritative: to question the bible is tantamount to questioning God. So the bible here is more like an instruction manual than a mystery to be unpacked. It teaches plainly, and woe to those who dissent.

On the other hand, there are the enlightened:

On the question of same-sex marriage, we may need reminding of one thing. God did not send us a fax. Instead, God chose to speak through Jesus – the body language of God – to remind us that God is ultimate love, and that those who live in love live in God, and God lives in them. Sex raises some interesting questions, for sure. But so far as God is concerned, love is always the answer.

So there you have it, the mediated word descending from the spires of Oxford: each marriage is unique, and love is always the answer. I recall another Oxford don who distinguished the different forms of love and wrote this about sex: “There is no getting away from it; the Christian rule is, ‘Either marriage with complete faithfulness to your partner, or abstinence’” (C.S. Lewis, The Four Loves and Mere Christianity).

Now Archbishop Sentamu does not endorse Professor Percy’s conclusion about same-sex marriage nor his reading of the Bible, but he does suggest that since Percy is baptized and reads the Bible, his view is morally equivalent to the plain and historic understanding of the church. He concludes:

May this General Synod continue to think and act in catholic communion with the wider Church and in the pursuit of Christian unity, and especially in partnership with the Anglican Communion as it expresses its unity and humility through the Lambeth Conferences. And when we disagree, to disagree Christianly in a Jesus Christ shaped life.

There is an unavoidable contradiction here. The only way for the Anglican Communion and Lambeth Conference to act “in catholic communion with the wider church” is by rejecting the moral equivalence implied between the plain and canonical meaning of the Bible and the distortions and caricatures of Martyn Percy.

But that is not what the Archbishop means. As I see it, he is using “good disagreement” as a canopy term for calling into question the authoritative moral teaching of the 1998 Lambeth Resolution and inviting the LGBT agenda in as an equal partner in “dialogue.” It will come as no surprise that a similar approach will characterize the Living in Love and Faith study of the Church of England.

I call this moral equivocation, with moral equivalence as a stepping stone to the edge of the Pit. The Apostles like Jude, the brother of Jesus, spoke in an unequivocal way when confronted with this kind of double-mindedness:

But you must remember, beloved, the predictions of the apostles of our Lord Jesus Christ. They said to you, “In the last time there will be scoffers, following their own ungodly passions.” It is these who cause divisions, worldly people, devoid of the Spirit. But you, beloved, building yourselves up in your most holy faith and praying in the Holy Spirit, keep yourselves in the love of God, waiting for the mercy of our Lord Jesus Christ that leads to eternal life. (Jude 17-21)