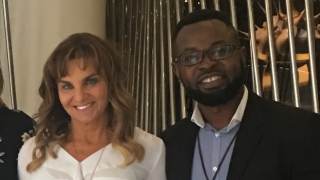 Andrea Williams, Chief Executive of Christian Concern and the Christian Legal Centre comments on the judgment handed down this week in the case of Felix Ngole, the student who was expelled from Sheffield University for expressing Biblical views on sexual ethics.

I am delighted by this victory for free speech. The judges in the Court of Appeal have ruled in favour of Felix Ngole and against the university, saying that he should not have been expelled merely for expressing his Christian views. His expulsion was a serious violation of free speech that threatened Christians and others with a bar to employment for expressing what the Bible says about sexual ethics.

The university made clear that any expression of disapproval of same-sex marriage and same-sex relations – however mildly expressed – should result in a student like Felix being expelled. The university’s position was that while Felix was entitled to his views, he was not entitled to express them.

The university argued that even expressing Biblical views in a church, or any community where the speaker could be identified, should result in a bar to employment in social services. Even if such views were expressed in private, they would risk being reported. This amounts to endorsement by the university of something akin to a totalitarian regime where people are reported to the state authorities by informants for expressing politically incorrect views. As it was, Felix’s Facebook posts were anonymously reported to the university by someone with a clear political agenda.

As the judges pointed out:

“If social workers and social work students must not express such views, then what of art therapists, occupational therapists, paramedics, psychologists, radiographers, speech and language therapists:  all professions whose students and practitioners work under the rubric of the same general regulations?  What of teachers and student teachers?”

All sorts of professions would be affected.

As the judges recognised, this would not just be a bar to Christians, but Jews, Muslims, Hindus, Buddhists, and members of other faiths. This is a victory for all of us and for freedom of expression for professionals of all kinds.

The judges commented on the position of the university:

“In practice, if such were a proper interpretation of professional regulation supported by law, no such believing Christian would be secure in such a profession, unless they resolved never to express their views on this issue other than in private.  Even then, what if a private expression of views was overheard and reported?  The postings in question here were found following a positive internet search by the anonymous complainant.  What if such statements had been revealed by a person who had attended a church service or Bible class?”

Christian Concern’s co-founder, Pastor Ade Omooba MBE attended meetings with the university in order to try to resolve the conflict. The judges supported what Pastor Omooba said and agreed with his description of the university’s position that “the University was insisting that Felix cannot express his Christian beliefs on homosexuality in any forum except at a private setting.”

Pastor Omooba tried to propose a way to resolve the conflict, and the university is criticised by the judges who said:

“It is unfortunate that at no stage did the University grasp the olive branch proffered by Pastor Omooba.”

The university’s position was that Felix Ngole lacked “insight” into the effect of his posts. This was ultimately the basis on which he was expelled. In a striking and deliberate use of the same language, the judges in the appeal court said that the university itself can be described as “lacking insight”. This was because:

“The University failed to appreciate that it had taken a stance which did not accord with the HCPC guidance or common sense.”

I hope that this judgment brings a return to common sense about what is acceptable for students and professionals to express on social media, in churches or elsewhere.

This judgment must send a resounding message to Universities and employers across the land. Christians and others should be allowed to express their views. This is what free speech means. No one has freedom not to be offended. We must be able to disagree with tolerance, and not with silencing or bullying. Places of work, and universities in particular, should not be places where certain views are deemed politically incorrect and worthy of expulsion.

This judgment means that we are free to speak, free to express Christian views, to advocate for those views at university, in the classroom, and at work.

Christians should use our freedom of speech and unashamedly proclaim Biblical truth, however unpopular or out of fashion it may be. The truth will win out in the end. We hope that this judgment encourages Christians to be bold and fearless in expressing their Christian faith at work, at university, in church or elsewhere. All truth is found in Jesus Christ. In Colossians 1 we are told:

The world needs the truth for in the Truth all things hold together. And it is by the truth we are all set free.

Felix is exactly the kind of person that we want in social work. Today he stands vindicated; today justice has been done. But it’s not just for him; it’s for us, the Church here in the UK. Let’s ensure that this emboldens us to speak of the life-giving good news that is found in Jesus Christ.