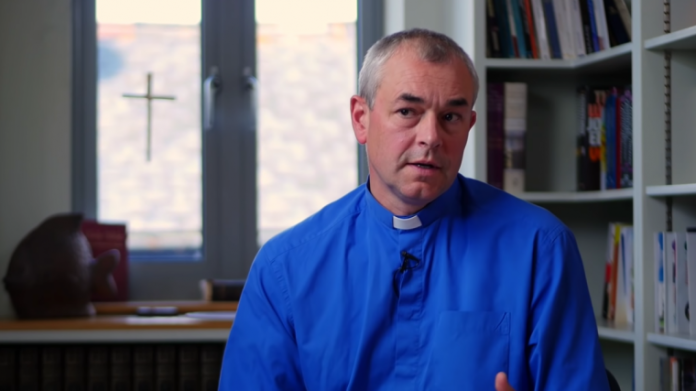 Last month, Rev. John Parker resigned as governor of a Church of England (CofE) primary school over concerns about a young child being allowed to transition gender in the school, and the school inviting transgender lobby group Mermaids to provide training to staff and governors.

A recording of the Mermaid’s training session exposed that Mermaids were misrepresenting both the law and the science in their training and not allowing room for questions or alternative views to be expressed.

John Parker also resigned as a vicar in the CofE, citing the diocese’s support of transgender ideology in the primary school as the final straw. Parker said that he has expressed concerns in meetings with the bishops of the diocese over the last few years about the CofE embracing unbiblical approaches to matters of sexuality and gender.

Told he ‘could leave’

John Parker said to a journalist: “I was basically told by my bishop that if I wished to faithfully follow the teachings of the Bible then I was no longer welcome in the Church.”

“This situation, in its entire disregard for the Christian children and parents in the school, and those of other faiths and philosophies, presented the clearest possible instance of what Bishop Stephen had previously told me – that my Biblical views on sexuality were not welcome in the Church of England and that I ‘could leave’.”

This is a shocking and disturbing revelation of the level of intolerance manifested by the Bishop of Chelmsford, Bishop Stephen Cottrell. John Parker said that Bishop Stephen suggested he could leave the CofE if he didn’t agree that it is acceptable to ‘agree to disagree’ on issues of sexuality and gender.

On 30 May, Bishop Stephen expressly denied this on Twitter stating:

“I never said this to John Parker and I would be horrified if I did.”

“I’ve never actually had a conversation or exchange with John Parker on this matter whatsoever.”

Bishop Stephen went on to issue an Ad Clerum in which he said:

“John Parker and I have always had a warm relationship, and I was sad to receive his letter of resignation. I certainly did not, as has been claimed, ask or imply that he should leave the Church of England on account of his views on the matter in question, or that he was not welcome.”

In context, Bishop Stephen’s Ad Clerum suggests that “the matter in question” is the CofE primary school’s capitulation to transgender ideology and Mermaids. But John Parker clearly stated his reasons for resigning from the Church of England – its lack of faithfulness on sexuality and gender. The complicity of the diocese in the school situation was only the final straw. Given the full content of John Parker’s statement, it is clear that the Bishop was fully aware of John’s views and that he had previously broken communion with Bishop Stephen over this matter. Therefore it is disingenuous for the Bishop to deny he had had any conversation with John Parker relating to the reasons for which he resigned.

Others have also been told they could leave

It has now emerged that, in spite of Bishop Stephen’s denials, he has form in telling people they could leave the Church of England. On Wednesday 12 June, a vicar in the diocese, Steven Hanna, expressed disquiet that the bishop’s statement had not yet been publicly refuted. It seemed that many ministers in the diocese were well aware that Bishop Stephen had made these kinds of comments before.

Then on Thursday 13 June, a statement was released on the GAFCON UK and Church Society websites. It is worth reproducing in full:

“Representatives of conservative evangelical clergy from the Diocese of Chelmsford met on Wednesday 12 June to discuss, among other matters, Bishop Stephen Cottrell’s letter to clergy of June 2019.

“We noticed it was carefully worded,” said Kieran Bush, Vicar of St John’s, Walthamstow. “It gave the impression that the Bishop had never suggested that John Parker should leave the Church of England. The truth is that Stephen Cottrell has, on more than one occasion, told clergy, including John Parker, that if we disagree with the approach the Diocese is taking on matters of human sexuality we should follow our consciences and leave.  There were more than thirty clergy at one of the meetings.”

“We are all concerned about the growing climate of intolerance and the number of clergy who are finding their position in the Church of England increasingly untenable,” said another member of the group, Mark Holdaway, Rector of St Michael’s Kirby-le-Soken with All Saints, Great Holland.”

It’s clear that Bishop Stephen has said on more than one occasion, and to multiple clergy, that if they disagree with the approach of the diocese on sexuality they could leave the Church of England. John Parker is not the only one who has essentially been told by Bishop Stephen that if you wish to faithfully follow the teachings of the Bible then you are no longer welcome in the Church.

Even if his comments were given the softest, gentlest kind of interpretation – a pure support for freedom of conscience – Bishop Stephen has to realise that as the diocesan bishop, with authority over the clergy in the area, his words would land with considerable force, conveying the impression that the views of Biblical clergy in the area were not welcome.

Bishop Stephen has continued to deny what many ministers in his diocese are saying. When asked about the latest statement he said onTwitter:

“1. The diocese has no view on human sexuality that is not the view of the Church of England. 2. There is a world of difference between acknowledging that,sadly, conscience may lead any of us – me included- to move on & suggesting people should leave. I have never said the latter”

It appears that there are more than thirty clergy in his diocese who would disagree with Bishop Stephen’s account.

We should note first that Bishop Stephen’s Ad Clerum made clear that he fully supports the actions of the school – which include inviting Mermaids to promote transgender ideology in the school, thereby allowing them to misrepresent the law and the science to teachers and governors. In supporting such indoctrination, the actions of the bishop are clearly contrary to Biblical teaching on sex and gender.

The bishop’s Ad Clerum holds out a small hope that he is having second thoughts about what happened at the school:

“…we will continue to work with schools about their use of external training providers. This reflection had begun before the story became news.”

But this ‘reflection’ is so vague as to be useless, without public repentance for the diocese’s actions regarding the primary school and the according change in policy.

Secondly, the bishop clearly has said to people who are unhappy with the acceptance, and even promotion of, transgender ideology within the diocese that they could follow their consciences and leave. It appears that he acknowledges wording similar to that in his latest tweet. He appears to be spinning the context and what he meant to avoid what those in the meeting clearly understood him to be saying.  He has moved on from being “horrified if he had” suggested that John Parker could leave, to admitting that he has suggested that people’s consciences might lead them to leave. What he now needs to admit is that the conscience matter in question is the approach of the diocese to matters of sexuality and gender over which John Parker resigned.

The Bishop has claimed that others (I wonder who he’s talking about?) have made “false claims” about the sad situation in the Diocese of Chelmsford – but his Ad Clerum is, at best, misleading and arguably irresponsible in its portrayal of the situation.

What this whole episode reveals is an extraordinary level of intolerance for people who hold to a Biblical view of marriage and a true, scientific, view of gender. Oxford biology graduate John Parker felt forced to resign. More than thirty other clergy have been told that if they disagree with the approach of the diocese they could also resign. Bishop Stephen is forging ahead encouraging the promotion of transgender ideology and allowing transitioning of primary school children who haven’t even hit puberty. If you don’t like it you can leave.

Suggesting that people can change their gender is a cruel lie that robs children of who they truly are, before God. A truly loving Church would provide – in its congregations and schools – a safe space for all who are confused about their gender to find healing and comfort in Christ the Redeemer. The kind of teaching that Mermaids is promoting amounts to the indoctrination of young children with harmful lies.

The question now is where next for the CofE? Bishop Stephen’s statements clearly show the direction of travel. If you don’t like it – you know what he would say.