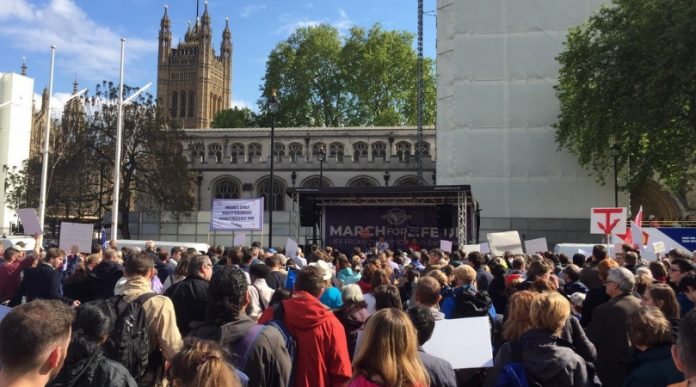 Militant abortion advocates attempted to disrupt and drown out an abortion survivor’s testimony at London’s March for Life as they parodied a popular song and sang: “We need abortion and if it’s quite alright.”

More than 5000 pro-lifers gathered on May 11 to mark Lifefest 19, the second London-based rally, organised by the U.K.’s March for Life movement.

Marching under the banner of “Life from Conception: No Exception,” thousands knelt in prayers of repentance for the nation, after a procession from Emmanuel Centre, Westminster, to the Houses of Parliament in the heart of London.

People were shedding tears as Melissa Ohden from the United States shared her testimony of how she survived a “failed” saline infusion abortion 41 years ago after being soaked in a toxic salt solution that was injected into her mother’s amniotic fluid intending to slowly scald her to death.

“My medical records indicate that I soaked in that toxic solution for five days—two days longer than what was typical for the procedure,” she told the shocked audience. “No mercy was shown to me over those five days. There was no mistake made that spared my life,” she said.

“On that fifth day of the saline infusion abortion, my birth mother’s labour was finally induced. I should have been delivered dead, as a successful abortion, a deceased child. But quite clearly, God had other plans that day for me,” she said. Pro-lifers shouted “Hallelujah” and cheered as she spoke.

Ohden recounted how her grandmother demanded that the nurses leave her to die when she saw the abortion had failed. “Leaving children to die, making them ‘comfortable’ while we discuss what will happen to them is infanticide,” she said, referring to recent U.S. debates “as some lawmakers work to protect abortion to the point that they would deny us protection and in doing so, continue to mark us for death.”

As Ohden narrated her testimony, a group of around 75 pro-abortionists began shouting abuse at her and began loudly and repeatedly singing the chorus from Engelbert Humperdinck’s song “I love you baby, and if it’s quite all right” to the words “We need abortions and if it’s quite alright.”

Ruth Rawlins, Head of Communications for Centre for Bio-ethical Reform UK tried to engage the protestors in dialogue and a couple of young pro-choice women came forward to respond but pro-abort leaders pulled them back instructing them not to respond saying they would speak only to the media.

Bishop John Keenan, Catholic Bishop of Paisley, Scotland, who addressed the gathering and closed the rally in prayer highlighted William Wilberforce’s role in abolishing slavery and how slaves were dehumanised as non-persons. Similarly, abortionists needed to dehumanise the unborn child so they could kill it in the womb, he said.

“Let it not be said that I was silent when they needed me. You may choose to look the other way, but you can never say again that you did not know,” he challenged the audience, quoting Wilberforce.

“If you’re a leader in society, civic, as an MP, or in the church as a priest or a bishop, be brave, be courageous, because this battle will be won not just by the truth, but it will be won by courage, too,” Keenan said.

Participants, overwhelming Catholic, supported by smaller numbers of Evangelicals, said they found the morning workshops and afternoon march based on the theme ‘Irreplaceable,’ to be inspirational, informative, empowering and joyful. A workshop speaker described “the very large number of young people and children” as “an unexpected blessing.”

Other speakers included biomedical scientist Obianuju Ekeocha, a Nigerian-born Catholic, and Jennifer and Jeff Christie. Jennifer narrated how she was brutally raped and left for dead by a serial killer but survived, only to find she’d conceived as a result of the rape. It was her husband Jeff’s support that helped her to keep her son, she said.

Tim Dieppe, Head of Public Policy at Christian Concern, Dr. Ronan Cleary from Doctors For Life Ireland, and Pastor Darnell and Karen Starks of the Crookston Baptist Church in Glasgow also spoke during the morning workshops.

Not a single bishop from the established Church of England or the leadership of the major conservative Evangelical churches was represented at the march.

The Anglican Bishop of London, Sarah Mullally, a former midwife in Britain’s National Health Service describes herself as “pro choice rather than pro live [sic],” adding, “although if it were a continuum I would be somewhere along it moving towards pro life when it relates to my choice and then enabling choice when it related to others.”

In 2017, the Royal College of Midwives was accused of pushing for “an abortion free-for-all.”