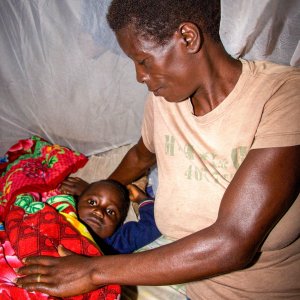 This World Malaria Day – 25th April –  we celebrate the Isdell:Flowers Cross Border Malaria Initiative. This inspirational programme is having remarkable impact eliminating malaria by engaging local churches and communities, including dioceses in the Provinces of Central and Southern Africa. The latest developments in this initiative were discussed at their Round Table in Livingstone, Zambia, in March 2019.

The Isdell:Flowers Cross Border Malaria Initiative highlights the key contribution of faith communities as significant actors in the efforts to eliminate malaria. The challenge is how to connect with the hard-to-reach populations: how to go the last mile in malaria prevention, detection and treatment.

In this initiative, the local church works alongside health services, researchers and civil society, in travelling that last mile, extending the reach and impact of the local health services further into the community – and with data to prove it.

Worldwide there has been significant progress towards malaria elimination over the past 15 years: the number of malaria deaths has been cut nearly in half since 2004 (from more than 790,000 in 2004 to about 435,000 in 2017), and 37 countries that previously had malaria are now malaria-free. However, 3 billion people live in places that are still at risk of malaria. The Isdell:Flowers Initiative focuses on the risky areas across national borders where malaria elimination efforts benefit from coordinated responses and polices between bordering countries.

This initiative partners with national governments, the Anglican Church, non-governmental organizations (NGOs), and community members to eliminate malaria along the shared borders of Angola, Namibia, Zambia, and Zimbabwe. It is comprised of 1,700 community malaria volunteers who provide malaria education, rapid testing, and treatment in places that are beyond the reach of most NGO and even government services.

Archbishop Albert Chama, Primate of the Province of Central Africa and Chair of the Anglican Alliance, spoke at the recent Livingstone Round Table about the role of faith in malaria elimination.

Archbishop Chama stated, “It is our role as a church to be involved in health-related matters. When we talk about the healing of people, it is not only spiritual but also physically that they are healed… We need to take a front seat so that we can be able to inform people the dangers of malaria, so that it can be prevented.”

Archbishop Chama recognized that communities cannot act alone. Reflecting on the scientific malaria facts that were shared at the Round Table, he explained, “The Church should take the scientific data seriously…because now we can do things from an informed perspective. We can inform people using real evidence on the ground.”

Canon Grace Kaiso, the General Secretary of the Council of Anglican Provinces of Africa (CAPA) and Anglican Alliance Trustee, also attended the recent Round Table. He reflected: “It is important for us all to come together because it implies that we have a common enemy [malaria]. And this enemy can be fought by different faiths, but on the same platform. It is about humanity.”

“This is the calling of the church. The church is about abundant life. We are talking here about holistic ministry. In my experience, the wellbeing of the church depends on the wellbeing on the person. We as leaders have influence and trust of the community. Therefore, how we use that influence can transform things. We have the infrastructure and networks. Can we use our spaces and congregations as a means of information sharing, as screening centers,” he added.

The leadership from Anglican churches gathered at the meeting pledged their commitment to further engage with communities in the battle against malaria. Also participating at the Round Table were four Bishops from Central and Southern Africa: Bishop David Njovu, Diocese of Lusaka (Zambia), Bishop Cleophas Lunga, Diocese of Matabeleland (Zimbabwe), Bishop Andres Soares, Diocese of Angola, and Bishop Luke Pato, Diocese of Namibia.

The Bishops shared their first-hand experience with church-based efforts to eliminate malaria from “last mile” communities — places that are beyond the reach of most NGO and even government services, but which have a faith congregation. See below for short videos of the Bishops’ reflections.

The campaign slogan, “Zero Malaria Starts With Me” was prominently displayed during the Round Table meeting, urging every individual to take personal responsibility in the fight against malaria.

Kenneth Tembo, a fisherman from Zimbabwe, exemplified this theme in the story he shared: once he realized the dangers of using his mosquito bed net for fishing, he stopped this behaviour and now is an advocate in his community for proper practices to protect oneself against malaria. “If I use my bed net for fishing, I’m digging my own grave,” he said.

Chris Flowers, Founder of the J.C. Flowers Foundation and Co-Founder of the Isdell:Flowers Cross Border Malaria Initiative, stated: “We will only conquer malaria if we all do our part and work together. We started here in Zambia 15 years ago, and we’ve made a tremendous amount of progress since then. I hope we will all be together 15 years from now in a malaria free Zambia.”

Neville Isdell, Co-Founder of the Isdell:Flowers Cross Border Malaria Initiative and former Chairman and CEO of Coca Cola, stressed the importance of ensuring effective “end to end processes” for malaria elimination – meaning that each link in the chain, from bed net manufacturing, to ensuring a child sleeps under a bed net, needs to be functioning properly.

The theme of the Round Table was “Community Engagement for Malaria Elimination,” and the purpose of the meeting was to share successful examples of community engagement to inform best practices, policy, and research.

Revd Rachel Carnegie, Anglican Alliance Executive Director, has attended two previous Round Tables. She commented: “Engagement on malaria initiatives is part of wider contributions by faith leaders and communities to the third Sustainable Development Goal – ensuring healthy lives and promoting well-being for all. Progress against malaria improves physical health, and also facilitates other human rights such as the ability to work, the right to a basic standard of living and education.”