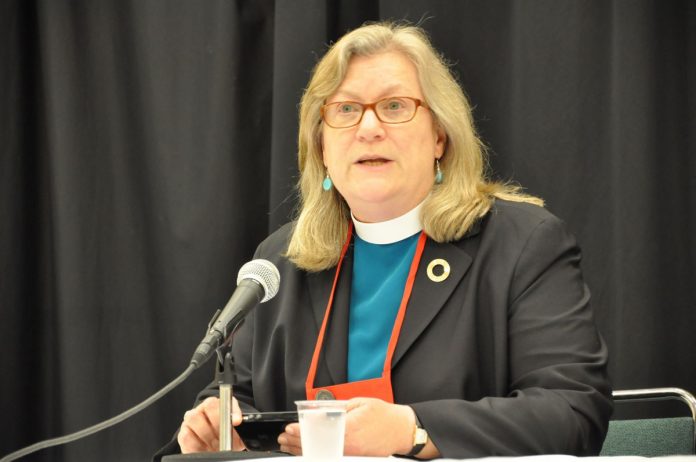 [February 27, 2019] The Rev. Gay Clark Jennings, President of the House of Deputies of The Episcopal Church, gave these remarks to the opening session of Executive Council on February 21:

Good morning. I’m glad to be here with all of you in Oklahoma City, and grateful to you, Bishop Ed, for your hospitality. I look forward to our time together.

I don’t know about you, but for me, 2019 has already been quite a year. I was fortunate enough to begin it by spending two weeks as a visiting professor at Church Divinity School of the Pacific, where I had the opportunity to meet both residential and low-residence students training for ministry. If my time with them is any indication, our next generation of leaders is bright, innovative, and ready to explore new ways to be The Episcopal Church in the 21st century. I got to give a talk on church governance—which as you know is my favorite thing to talk about—I got to meet with students from across the church discerning their vocations, and I got to go back to theology class. An 8:00 am theology class, no less.

And then I went on vacation. While I was on vacation, I did the thing that I always told people to do when I worked at CREDO. I unplugged. I didn’t look at social media, or at news reports, or at email. So, on Sunday evening, when I turned on the internet spigot, there was a flood. You know how that works, right?

And in that flood was one particular piece of news that I want to talk with you about today. That was the news that Archbishop of Canterbury Justin Welby is inviting some, but not all, spouses of bishops to the Lambeth Conference planned for 2020. The spouses he is not inviting are the ones who are the same sex as the bishops to whom they are married. We found this out when Archbishop Josiah Idowu-Fearon wrote a blog post about it. The theme of this Lambeth Conference, by the way, is “God’s Church for God’s World: walking, listening and witnessing together.”

So, the situation in which we find ourselves is peculiar. The Archbishop of Canterbury is citing a resolution that does not set policy for the Anglican Communion as a reason to exclude same-sex spouses from Lambeth. That same resolution defines marriage as a “lifelong union.” However, the opposite-sex spouses of bishops who have been divorced and remarried have been invited to Lambeth. We are left to conclude that excluding same-sex spouses is a selective decision—perhaps even an arbitrary one.

Now, thanks to the intrepid reporting of Mary Frances Schjonberg of Episcopal News Service, we know that precisely two spouses are currently excluded from Lambeth. One is the wife of Bishop Mary Glasspool of the Diocese of New York, and the other is the husband of Bishop Kevin Robertson of the Diocese of Toronto in the Anglican Church of Canada. A third, the husband of Bishop-elect Thomas Brown of Maine—also known, for a few more months, as Deputy Brown—will be excluded assuming that the consent process to that election is successful.

In short, the universe of people directly affected by this situation is small. Very small. The Archbishop of Canterbury had already written to Bishop Glasspool and her wife and spoken directly to Bishop Robertson. And yet, Archbishop Idowu-Fearon wrote a blog post about it titled “The global excitement about the Lambeth Conference.” We are left to ponder why it was important for the Anglican Communion Office to make this situation very, very public nearly 18 months in advance.

One other thing: When Bishop Robertson and his husband were married late last year, after nine years together, we learned from media reports that they are the parents of two little girls. I cannot overlook the fact that the Anglican Communion Office has created a public situation in which two children are learning that the hierarchy of the church considers their family to be a source of shame and worthy of exclusion. That makes me very angry. When little girls are collateral damage, that is not the way of love.

On Facebook, Deputy Winnie Varghese wrote, “I told an archbishop once that recent Lambeth conferences have done irreparable harm to the witness of The Episcopal Church to the most vulnerable in our society, poor, LGBTQI people of color, because if we show on the international stage that we won’t love our own people and our own leaders and their families, how could we possibly love them/us. … If you can’t invite everyone on equal terms, cancel. You’re not ready.”

In fact, across the Communion, particularly in Anglican Africa, there is a growing network of scholars, activists, and other church leaders who are committed to deeply theological conversations about religion and sexuality that are grounded in more generous interpretations of the Bible. As a founding member of the Chicago Consultation, I have been privileged to be a part of some of these conversations.

At one such conversation in Ghana in 2015, we issued a statement that gets at the real danger of exclusion. Here’s part of what we said:

“As members of Anglican churches and those of other denominations in Africa, and as
Episcopalians from the United States, we call upon our faith communities to make either
public commitment or private arrangement to serve as places of sanctuary for those who live
under the threat of violence for working on behalf of the gospel. We understand this group
to include LGBTI people, women and men living with HIV, ethnic, racial and religious
minorities on both continents and those who are potential victims of gender violence.

“We call upon Episcopalians on all levels of the church to commit themselves to fulfilling
Resolution A051 of the [2015] General Convention, which calls upon the church to use
resources developed by African Anglican leaders and organizations working to curb
anti-gay and anti-transgender violence, discrimination, and marginalization; to build
relationships with and learn from African Anglican scholars who are already offering
biblical interpretations that affirm the dignity and humanity of LGBTI people; and ‘to pray
for the safety of our LGBTI sisters and brothers, their families and communities, and for the
scholars and activists who tirelessly work on their behalf.’

“And because we understand that the church must not only act as Good Samaritans to those
who are robbed and beaten but also work at the systemic level to make safe the road from
Jericho to Jerusalem that is walked by everyone who strives for just and fair societies and
full inclusion in the Body of Christ, we pledge to work collaboratively in opposing the
legacy of colonialism and its present day manifestations, to stand against all principalities
and powers… and to understand that these evils are rooted in ideologies of power and
domination that have no place in the church or in our societies.”

Walking together along the road from Jericho to Jerusalem is at the heart of my experience of the Anglican Communion. I think the same is true for many of you who experience the Communion not as a series of dictates from archbishops or an office in London, but as life-giving, life-saving, mutual relationships rooted in dioceses, congregations and networks across the world. That is the Anglican Communion that deserves our energy and attention, our commitment, and our resources.

I hope that there is still time to resolve this situation and ensure that all bishops’ spouses will be invited to the Lambeth Conference. But if that is not possible, I think that the day is coming when we will need to take a hard look at where and how we invest the resources of The Episcopal Church across the Anglican Communion. There is so much good work happening, so many places where God has called us to walk together in mutual respect, love, and gospel truth. We have so many ways to invest ourselves in global mission that neither excludes nor shames, but rather witnesses to the love of Christ that binds us all together.

Let us be guided by that vision both now and in the years to come.