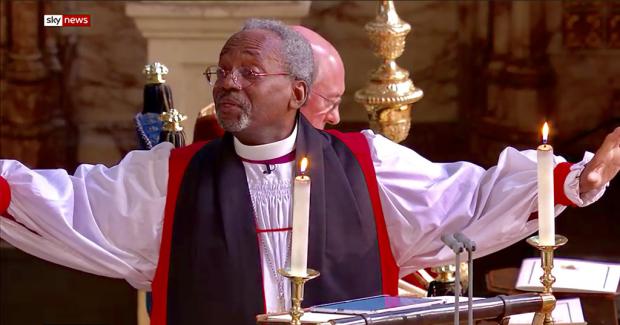 [Episcopal News Service] Presiding Bishop Michael Curry, with President Donald Trump seated at a table to his right, read a passage from Paul’s first letter to the Corinthians in brief remarks Feb. 7 at the 66th annual National Prayer Breakfast in Washington, D.C.

Curry was one of several faith and government leaders asked to offer prayers, scripture readings and blessings at the beginning of the morning program. The presiding bishop, who spoke for about three minutes, noted that the passage from 1 Corinthians 13 often is read at weddings – “Love is patient; love is kind” – but he also explained that Paul was writing about more than a sentimental kind of love.

“He wasn’t thinking about a wedding. He was worried about a community that had divisions in itself. And he wrote to show them the way,” Curry said.

Video of Curry’s remarks can be found here or in the clip below.

This year’s keynote speaker was Gary Haugen, chief executive officer of International Justice Mission. Haugen described working as an intern with South Africa Archbishop Desmond Tutu when Tutu was a leader in the movement to end apartheid. He spoke of faith’s ability to triumph over forces of division. And, citing the cause championed by his organization, he called for action against human trafficking, forced labor and other forms of modern slavery.

“Even in this divided era, there’s good that we all agree should be done,” Haugen said.

He was followed by Trump, who spoke for about 20 minutes. Among the highlights was the president’s praise for faith leaders who backed one of the few bipartisan achievements during the first half of his term, a criminal justice reform bill aimed at reducing the nation’s prison population and correcting racial disparities in sentencing. The bill, which passed in December, was supported by The Episcopal Church’s nonpartisan Office of Government Relations, based in Washington.

“America is a nation that believes in redemption,” Trump said. “Every day, the people in this room demonstrate the power of faith to transform lives, heal communities and lift up the forgotten.”

The high-profile annual event comes just two days after the president’s State of the Union speech, in which Trump issued a call for unity while tensions are running high. He, Democrats and even some members of his own Republican Party are at odds on a range of issues, particularly immigration.

Curry received a burst of international attention and acclaim last year when he preached at the royal wedding of Britain’s Prince Harry and Meghan Markle, a sermon that focused on the power of love. His appearance at the National Prayer Breakfast provided him an opportunity to apply that message of love to a different context.

“If I speak in the tongues of mortals and of angels, but do not have love, I am a noisy gong or a clanging cymbal. … Faith, hope and love abide, these three, and the greatest of these is love.” Curry said, reading from 1 Corinthians.

“Paul saw what Jesus meant,” Curry said. “That way of love can set us all free.” He closed his remarks by quoting the traditional black spiritual “There Is a Balm in Gilead,” a common refrain in Curry’s sermons, including in his royal wedding sermon.

The National Prayer Breakfast has been held every year in Washington since 1953. It is hosted by members of Congress and organized by the Fellowship Foundation, a Christian nonprofit organization.

Before this year’s program began, Trump greeted Curry and the other speakers with handshakes as the president made his way to his seat. The president shook Curry’s hand again afterward on his way out. It wasn’t immediately clear if this was Curry’s first time meeting Trump face to face.

Episcopal News Service has requested a comment from the presiding bishop about his experience attending the breakfast, which was held at the Washington Hilton near Dupont Circle. This story will be updated when Curry responds.

Curry often includes themes of faith-based unity over partisan division in his speeches and sermons while emphasizing that the Christian church courts trouble when it strays from the teachings of Jesus.

Last month, during his pastoral visit to the Diocese of the Central Gulf Coast, he preached at St. Andrew’s Episcopal Church in Panama City, Florida, and recounted a recent visit to Washington. While on Capitol Hill, he participated in a prayer service that is attended regularly by Episcopalians in Congress.