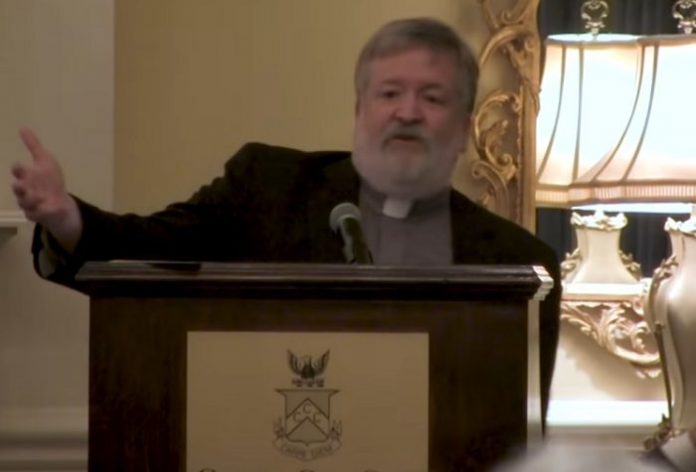 Churches and the west are embracing a pagan anthropology, and the church needs to own its failure to be “salt and light” in a sick culture, according to a leading intellectual figure in the Anglican realignment.

The Rev. Canon Dr. Kendall Harmon spoke in October to a gathering of American Anglican Council supporters in Atlanta, Georgia. Harmon serves as Canon Theologian for the Diocese of South Carolina where he was elected a deputy to multiple Episcopal Church General Conventions. The Diocese departed the Episcopal Church in 2012, later affiliating with the Anglican Church in North America (ACNA).

Harmon structured his presentation upon the past, present and future of Anglicanism, the church and the culture. He placed this in the context of Deuteronomy Chapter 8 in which Moses looks back at what the Hebrews have experienced, what is presently around them, and ahead as they enter the promised land.

Harmon offered a dire assessment that a “cancerous theology” has been exported into the wider Anglican Communion. He also diagnosed that the wider culture is on the verge of a new Dark Age, but also offered hope in the story of 18th Century English evangelical clergyman Charles Simeon that powerful revival can begin during spiritually dead times.

Recounting 1980s curriculum Sexuality: a Divine Gift distributed by the Episcopal Church’s national headquarters, Harmon recalled that it “promoted a perspective on human sexuality and human anthropology that was utterly different.” The curriculum relied extensively upon the work of American sexologist Alfred Kinsey and was described by then-Bishop of Colorado Bill Frey as “Dr. Ruth [Westheimer] in disguise.”

“It was pagan anthropology masquerading as Christian anthropology and it was being promoted by the Episcopal Church,” Harmon recounted. “That was just a little precursor to what was to come thereafter.”

Harmon stated that the 2003 General Convention of the Episcopal Church was a fight over marriage, anthropology and biblical truth, “…and that fight continues to this day.”

“The thing that the Episcopal Church was battling about in 2003 has actually become the battle at the elite level of our society,” Harmon identified. Harmon recounted how he authored a minority report while serving on a convention committee about the liturgical blessing of same-sex unions.

“They actually had a debate on the floor as to whether to expunge my minority report from existence,” Harmon recounted. “That is to say the only sufficient position is not simply to tolerate the new morality – you must support it.”

“Over a period of time all four of those Anglican instruments of unity utterly failed,” Harmon assessed. The failure of the U.S.-based Episcopal Church and Anglican Church of Canada to uphold biblical standards on human sexual practice were met with an Anglican Communion failure to exercise discipline.

“We were unable to exercise the discipline that would have held us together as a worldwide body and that is a true tragedy,” Harmon lamented. Instead, Harmon said, Anglicans must die two deaths. First, accept that the Episcopal Church is no longer an effective vehicle for the Gospel.

“God has … taken away his lampstand from the Episcopal Church,” Harmon said. “It’s no longer – as a whole – an effective vehicle for the Gospel.”

Second, the instruments had opportunity to deal with the North American problem, and they did not.

The Primates’ 2007 Tanzania statement “stands to this day as a valiant attempt in print as trying to exercise the discipline that is necessary,” Harmon assessed. “As soon as it was laid down on paper, the Archbishop of Canterbury – at the time Rowan Williams – came over to the House of Bishops meeting in New Orleans at the Episcopal Church and proceeded to actually undo the very words of the documents that the Primates had worked so hard on.”

“We’ve exported our cancerous theology into the entire structure of the communion because the instruments have failed,” Harmon stated. Fortunately, Harmon noted, the Global Anglican Future Conference (GAFCON) was born in this period, which Harmon assessed as electrifying and encouraging.

It definitely represents the future the Communion,” Harmon predicted. “The Global South is rising while the Communion is dealing with this metastasized theology and struggling at the same time in the West. As a whole, Christianity is struggling.”

“From my perspective as a lifelong observer, [The Church of] England is a goner,” Harmon flatly stated, ticking off a list of factors: Europe exporting secularism, North American elites’ pressure, Episcopal Church money “piling into Lambeth – in particular the Anglican Communion Office”.

“You could just feel the English church crumbling under the force of all of this pressure that’s being brought to bear,” Harmon assessed, comparing the situation to where the Episcopal Church was 20 years ago. Harmon predicted a “masqueraded local option” coming to the Church of England where there is a pretense of holding on to ancient Christianity but actually marching further into pagan anthropology.

“You and I live in a very sick culture,” Harmon summarized. Noting that Jesus said the church is to be “salt and light” Harmon observed that salt and light are preservatives, sources of flavor, and sources of sustaining life.

“Is it the fault of the room that is dark?” Harmon posited. “No, it’s dark because the light is not working. A culture which is losing its Christian flavor … is failing because the church is failing to be the church.”

Deploying the phrase “the pew never rises higher than the pulpit,” Harmon noted that a good sermon is organized, biblical, and applies the bible to daily life. In contrast, he lamented the state of American preaching ministry as “woefully inadequate.”

“It has to have its primary content from the Bible, it has to be clearly structured so that as a listener you can follow it,” Harmon quoted Simeon as saying. “You take them to the average American pulpit and the guy gets up there and he’s mumbling this strange amorphous set of pithy sayings and interesting jokes as if it’s some kind of entertainment seminar. The person’s already hit the off button.”

“I concede that [the state of the American church] is depressing, but it’s only depressing if you don’t believe it’s the truth. If it is the truth, for our God every obstacle is always an opportunity.”

Harmon closed on a more hopeful note that, if the tradition of the virtues was able to survive the last Dark Age, Christians are not entirely without grounds for hope. However, he assessed, barbarians are not waiting beyond the frontiers, but have “been governing us for quite some time.”

Harmon compared the current situation to “the early church struggling in that pluralistic and … spiritually crazy Roman Empire.” He suggested a return to a three-year catechumenate “to actually become a Christian, that is to say the challenges of evangelism, apologetics, church planting, and catechesis.”

Emphasizing that this is not “new territory,” Harmon again returned to Simeon, telling that in 1757 the annual University sermon at St. Mary’s Church, Cambridge, drew only three people.

“It was an ocean of spiritual death,” Harmon described. “What does Simeon do? He sets up a Ministry of evangelistic preaching and he creates this catechetical school. So much does he do catechesis that the church historians say that he had the influence of two or three Popes. Sixty missionaries with the Church Missionary Society alone came from under Charles Simeon’s ministry. So: catechesis, apologetics, church planting.”

“It’s back to basics, it’s back to the sources and it’s being totally unafraid to be about the Gospel in the most creative and serious way possible,” Harmon concluded. “We have an impossible task and we’ve got to own honestly the difficult place in which we find ourselves. We’re sliding into the new Dark Ages but God is looking to us and even Anglicanism and saying, “maybe here is one of the places where the sprouts of a genuine future that takes us past this incipient new Dark Ages lies.”

Harmon observed that the Anglican Communion is struggling, but so are all of the other Christian communities in ways that they never have before in recent history.

“The challenge is on. God is calling us,” Harmon declared. “I believe it is incumbent upon us to raise up more Charles Simeon like figures that can creatively go about the Gospel ministry because it makes all the difference in the world.”

The entirety of Harmon’s address can be viewed here: