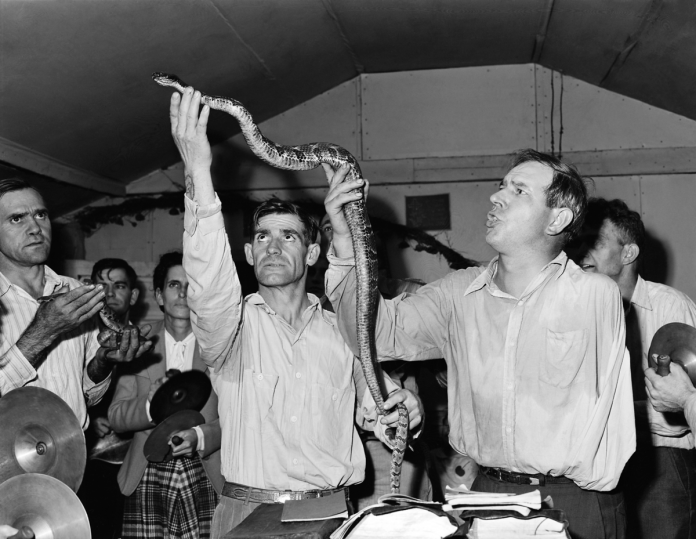 When you hear a media fanfare of brass, clashing of cymbals and thumping of tambourines panegyrizing Archbishop Justin Welby like a Roman princeling in Ben Hur, you know that one of two possibilities have come to pass.

First, there has been a big stink and Welby’s media flunkeys are masking the pong with a good news story. Second, a skeleton is going to tumble out of Welby’s wardrobe and dance on a tin roof at Lambeth Palace and Justin’s witch doctors are banging their tom toms and trying to distract you from the real story.

Now you know why wily Welby timed the “tongue speaking” interviewjust before the Briden report exonerating Bishop George Bell of molesting a child was released on Thursday.

In a fit of sheer intemperance, the Archbishop of Canterbury had besmirched and tarnished the good name of the former Bishop of Chichester by insisting that Bell, who had been dead for nearly sixty years, was guilty of paedophilia, even after the publication of the independent Lord Carlile Review. The Review reprimanded the Church of England for rushing to judge the deceased bishop. Welbysaid Bell was “accused of great wickedness” and apologised only “for the failures of the process.”

Now, in his 24-page report, Timothy Briden has concluded that the allegations against the saintly bishop are completely “unfounded.” This is Welby’s most humiliating climbdown since he pronounced with blind hubris that “a significant cloud” hung over Bell’s name and refused to retract his calumny even after seven leading historians wrote to him calling his claims “irresponsible and dangerous” and urging him “to repudiate what you have said before more damage is done.”

Finally, Welby has been forced to eat humble hummus and has demonstrated a degree of contriteness. “I apologise profoundly and unconditionally for the hurt caused to these people by the failures in parts of the process and take responsibility for this failure,” hesays. The people he is referring to are Bell’s relatives, colleagues, supporters, and those who looked up to Bell.

I count myself privileged to be one of the Bishop’s supporters—having written a number of columns defending the good and godly cleric and having the honour of being the speaker at the first Rebuilding Bridges Conference at Church House (the Church of England’s HQ) in defence of Bishop Bell.

Even here the authorities hounded us. On the eve of the conference, the Church of England released a statement claiming that its “National Safeguarding Team has received fresh information concerning Bishop George Bell. Sussex Police have been informed and we will work collaboratively with them,” albeit insisting that, “As this is a confidential matter we will not be able to say any more about this until inquiries have concluded.”

The conference went ahead thanks to Richard W. Symonds, founder of the Bell Society, who with courage, determination and moral fibre invested his time, money and energies into seeking the restoration of Bishop Bell’s reputation.

So let’s return to Welby’s pre-emptive interview with Premier Radio where he let us into his prayer closet and revealed how he prays in tongues at 5 am every day. The Archbishop also disclosed how he heard God’s voice: “I expect to hear from God through other people with words of knowledge or prophecies—some of which I am unsure about, others I can sense there being something of the Spirit of God.”

The apostle Paul mentions this spiritual gift in his first letter to the Corinthians. “For to one is given the word of wisdom through the Spirit, and to another the word of knowledge according to the same Spirit.” In his dependence on God, the Archbishop uses both categories of intelligible utterance (wisdom, knowledge, prophecy) and inspired ecstatic utterance (tongues, interpretation).

What is this “word of knowledge”? Some scholars suggest that Paul “has in mind a supernatural endowment of knowledge, factual information that could not otherwise have been known without the Spirit’s aid,” writes Gordon Fee, while “others see it as referring to something more akin to inspired teaching, perhaps related to receiving Christian insight into the meaning of Scripture.”

Either interpretation would apply to Welby’s use of “words of knowledge.” No one knew for sure what happened in the mysterious case of “Carol” and Bishop Bell. However, the great and good of the land in one accord inundated Welby with “words of knowledge” telling him George Bell was innocent.

These ranged from columnists like Peter Hitchens (himself an Anglican convert from atheism) to historian Andrew Chandler, author of the recent authoritative biography on Bishop Bell. Seven leading historians sent Welby their “words of knowledge.” George Bell’s 94-year-old niece Barbara Whitley sent him her own “word of knowledge” and asked him to resign for smearing her uncle. Bishop Gavin Ashenden warned Welby that he was in “the grip of what appears to be both a serious sin and a psychological distortion.” I wrote how I believed Welby was one hundred percent sincere, but was afflicted by a severe case of cognitive dissonance. The Re-building Bridges conferences sent “words of knowledge” to Welby calling for justice and reconciliation. Welby remained as deaf as an adder.

A number of us alerted the Archbishop to God’s revealed “words of knowledge” in Scripture. The ninth commandment warns us not to bear false witness against our neighbour. “You shall not spread a false report,” says the Torah. “A single witness shall not suffice against a person for any crime or for any wrong in connection with any offence that he has committed. Only on the evidence of two witnesses or of three witnesses shall a charge be established,” says the law code of Deuteronomy.

“Do not entertain an accusation against an elder (presbyter) unless it is brought by two or three witnesses,” writes Paul to Timothy. A torrent of biblical “words of knowledge”! Why did Welby not hear God shouting at him through the megaphone of his Word?

There were “words of knowledge” from the wisdom of Western jurisprudence accrued over the centuries with biblical and Roman roots. The Emperor Trajan declared in AD 112: “Anonymous accusations must not be admitted in evidence as against any one, as it is introducing a dangerous precedent.” The presumption of innocence is another “word of knowledge” Welby threw to the winds.

In the Acts of the Apostles, Paul is awaiting trial and is brought before King Agrippa II and Porcius Festus, Procurator of Judea. The chief priests and elders ask them to condemn Paul. Festus reports to Agrippa his response to the Jewish leaders: “I answered them that it was not the custom of the Romans to give up anyone before the accused met the accusers face to face and had opportunity to make his defence concerning the charge laid against him.”

Welby also discounted “words of knowledge” from psychological research, which has an abundance of data on “false memory,” and several thousand case histories have been referred to the British False Memory Society.

Like a hibernating tortoise, Welby ignored every single strand of “knowledge.” Like Tony Blair, he waved his sexed-up dossier and from his plinth of pomposity pontificated that he, and he alone, had this esoteric gnosis that George Bell had perpetrated the unmentionable sin.

Despite the sharp jab to Welby’s archiepiscopal hooter from the Briden report, there is some debate as to whether he has actually unreservedly apologised. In the very next sentence after Welby apologises “unconditionally” he inserts a conditional sentence prefixed with “however.” “However, it is still the case that there is a woman who came forward with a serious allegation relating to an historic case of abuse and this cannot be ignored or swept under the carpet.”

The dictionary notes that this adverb is “used to introduce a statement that contrasts with or seems to contradict something that has been said previously.” In response to Welby’s caveat, Richard Symonds asksWelby: “So, Archbishop, are you saying your ‘significant cloud’ no longer hangs over Bishop George Bell? If so, would you please apologise for that monstrous remark.”

No, he won’t Richard! Not until he has a “word of knowledge” from God. Or, perhaps, we ought to graciously accept our Justin’s “unconditional” apology as yet another example of his “speaking in tongues”—an ecstatic and unintelligible utterance?