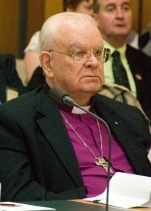 Bishop Philip Newell has petitioned the Supreme Court of Tasmania to suspend church proceedings, arguing he is too ill to respond to the charges.

Lawyers for the Rt. Rev. Philip Newell have petitioned the Supreme Court of Tasmania to suspend disciplinary proceedings initiated by the diocese against him for misconduct, arguing the former bishop of Tasmania is too ill to respond to the charges.

In February 2017 the current Bishop of Tasmania, the Rt. Rev. Richard Condie said he had referred Bishop Newell to a church disciplinary tribunal following the publication of the Royal Commission into Institutional Responses to Child Sexual Abuse Case Study 36 – The response of the Church of England Boy’s Society and the Anglican Dioceses of Tasmania, Adelaide, Brisbane and Sydney to allegations of child sexual abuse.

The Report details the findings of the Royal Commission on the activities of CEBS in Tasmania and other places. It reminds us once again of the terrible sin of sexual abuse, and the ongoing damage it causes in people’s lives. I am aware that many in this Diocese and beyond have been, and continue to be, affected by it. The survivors continue to suffer a great deal and need to be regularly in our prayers for healing and wholeness. The insidious nature of the abuse also means that the trauma is felt by many others related directly and indirectly to it.

The Royal Commission’s Report raised some serious failures of the Diocese of Tasmania in handling these matters in the past. It is critical of the way in which the former Bishop of Tasmania, The Right Revd Philip Newell AO acted in response to complaints of sexual abuse in the 1980’s and 1990’s. In light of this, I have initiated a process of Church discipline under our Ministry and Tribunal Ordinance in relation to Bishop Newell.

A formal investigation by the Episcopal Standards Commission recommended that charges be laid against Bishop Newell and a disciplinary tribunal be convened to hear the matter. Late last week, Bishop Newell’s lawyers applied to Tasmania’s Supreme Court for a permanent stay on proceedings because of ill health. The bishop did not have the mental or physical capacity to mount a defense to the charges, his attorney said.

No date has been set to hear the bishop’s application before the Supreme Court. The diocese has halted proceedings pending the court’s ruling.

In July the Diocese of Newcastle announced that it had referred three former bishops to the Episcopal Standards Commission after the Royal Commission heard evidence the bishops had failed to act against child abuse by the clergy and church workers in the diocese.

The diocese has referred the former Bishops of Newcastle the Rt. Rev. Alfred Holland and the Most Rev. Roger Herft to the Episcopal Standards Commission, and former Assistant Bishop the Rt. Rev. Richard Appleby to the diocese’s professional standards committee, after the Royal Commission into Institutional Responses to Child Sexual Abuse report was released last December.

The commission found Archbishop Herft, who served as diocesan bishop from 1993 to 2005 before being translated to Perth had a “weak and ineffectual response” to child sexual abuse allegations that was a “failure of leadership” which “showed no regard for the need to protect children”. The commission found Bishop Holland, who served from 1978 to 2002 had  a “do nothing” policy in response to child sexual abuse allegations, while his assistant from 1983 to 1992, Bishop Richard Appleby took no action after being informed of clergy child abuse.

Bishop Peter Stuart of Newcastle said the disciplinary referrals were part of the diocese’s response to an internal review and the royal commission’s findings.