No, it wasn’t a service intended to facilitate worship of music superstar Beyoncé Knowles-Carter, as one Nigerian publication incorrectly reported, but the recent “Beyoncé mass” at San Francisco’s Grace Episcopal Cathedral was predictably over-the-top.

According to glowing reports from California media, the gathering themed around the song catalogue of the former Destiny’s Child lead singer attracted approximately 900 participants to the April 25 midweek worship service. The crowd size was far in excess of the Episcopal congregation’s average Sunday attendance, which has dropped from 900 to 600 in the past decade.

The Beyoncé mass joins a long list of themed Eucharistic celebrations, among them the U2charist, the Dr. Seuss-themed “Seusscharist”, and the Clown Eucharist. Some feature artists’ popular music interspersed within an otherwise normal prayer book service, while the more outlandish have clergy dressed in costume.

Each share a common attribute: projects of mainline Protestants eager for media exposure and recognition as liturgical innovators.

Knowles-Carter has not publicly identified herself with the Episcopal Church – or the Christian faith in general – nor did she participate in the Grace Cathedral event. The performer’s identity as an African-American woman did shape the liturgy, with participants given a womanist version of the Lord’s Prayer to recite addressed to “Our Mother”. The prayer’s plea to “lead us not into temptation but deliver us from evil” was exchanged for “Separate us from the temptation of empire, But deliver us into community.”

Participants also joined in a “calling out” for those in bondage to homophobia, transphobia, and patriarchy, interspersed with a stanza from the song “Freedom”: “Freedom! Freedom! I can’t move Freedom, cut me loose!”

Grace Cathedral is not a newcomer to this field, having hosted a variety of outlandish events going back decades, including a “Rave Mass” in 1994. Episcopal diocesan cathedrals in Washington, D.C. and New York have also hosted oddball celebrations: in 2009 the Washington National Cathedral organized and hosted “Sacred Circles: A Celebration of Women’s Spirituality” featuring pagan idolatry in which gifts were offered up to summon spirits. More recently, the Cathedral offered “sacred breath yoga” complete with “sound bath meditation with crystal bowls”.

Grace cathedral’s most enduring contribution has been the modern Labyrinth movement, in which progressive Episcopal churches offer a vague promise of spiritual awakening found more often in eastern mysticism and untethered from the person of Jesus Christ.

Cathedrals are expensive buildings to operate and maintain, which led the Washington National Cathedral in 2014 to make the space available to rent for corporate events.

In 2007, George Conger of Anglican Ink reported how the Cathedral of St John the Divine in New York leased its premises to the singer Elton John to celebrate his 60th birthday:

John, who months before gave voice to his disdain for Christianity, noting he would “ban religion completely … Organized religion doesn’t seem to work. It turns people into hateful lemmings, and it’s not really compassionate,” turned the Diocese of New York’s cathedral into a ballroom.

The New York Post reported that for John’s party “the altar was set up as a stage for the performers, which included the trendy rock group Scissor Sisters, Sting and Paul McCartney.”

The full text of the womanist Lord’s Prayer recited at Grace Cathedral is below:

“Our Mother,
who is in heaven and within us,
We call upon your names.
Your wisdom come.
Your will be done,
In all the spaces in which You dwell.
Give us each day
Sustenance and perseverance.
Remind us of our limits as
we give grace to the limits of others.
Separate us from the temptation of empire,
But deliver us into community.
For you are the dwelling place within us
the empowerment around us
and the celebration among us
now and for ever.”

Video from the “calling out” segment of the service: 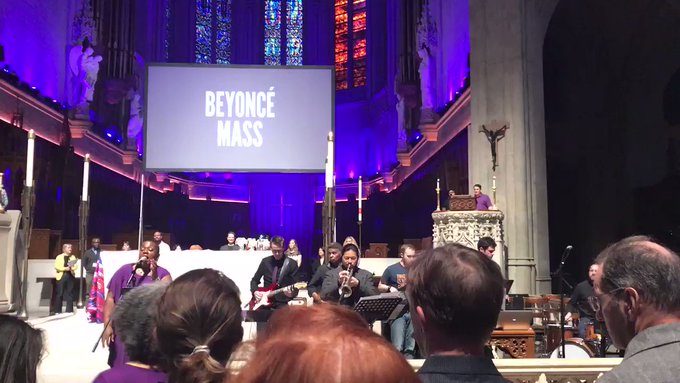 This rendition of “Freedom” was my favorite part of the service. Freedom from racism, sexism, classism, homophobia, and transphobia. #BeyonceMass

Reprinted with the permission of the author from Juicy Ecumenism

A ‘call to prayer’ issued to UK Evangelicals ahead...

Bishop of Gippsland: ‘There is no obstacle’ to same-sex...

Church of England’s General Synod will debate a call...

Welby invites Moscow and Kyiv to the 2022 Lambeth...