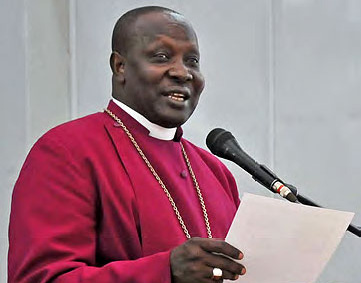 Archbishop Ezekiel Kondo of Khartoum first primate of the Sudan

[ACNS] The Archbishop of the Internal Province of Sudan and Bishop of Khartoum, the Most Revd Ezekiel Kumir Kondo, has been appointed as the Primate of the newly created separate Province of Sudan. The Anglican Communion announced the creation of the new Province earlier this year and the Archbishop of Canterbury it to travel to the region for the inauguration at the end of July.

Speaking when the new Province was confirmed, Archbishop Kondo expressed joy at the news: “I would like to say that the Christians and the entire people of Sudan are very much looking forward to welcoming the Archbishop of Canterbury, Justin Welby and Mrs Welby to inaugurate the New Province of Sudan, number 39, which represents 39 Articles of faith of the Anglican Church and the 39 books of the OT! It is my prayer and hope that the occasion will strengthen the church in Sudan for God’s glory and extension of His Kingdom.”

The Secretary General of the Anglican Communion, Archbishop Josiah Idowu-Fearon, has described the new Province as a “welcome development” that will help connect Christians there with Anglicans in the worldwide Communion.

South Sudan gained independence from Sudan in 2011, which left the Primate of Sudan and South Sudan, Archbishop Daniel Deng, with the challenge of overseeing two countries. The four and a half million members of the Episcopal Church are based mainly in South Sudan. In 2016 a formal application was made by the Primate to the Anglican Consultative Council (ACC), for the internal province of Sudan to be granted autonomy; in July 2016 a team  led by the Secretary General visited the country on a fact-finding trip. Subjects that were reviewed included staff numbers, financial viability and mission focus, as well as the numbers of lay workers.

When the new Province was announced, Archbishop Josiah said: “It’s a welcome development that we now have another Anglican Province in a predominantly Muslim country. We hope the Province will stand and proclaim Christ in a way that will be meaningful in that context. Having Sudan as a separate Province of the Communion will benefit Christians in Sudan;  now they will know they are not  alone, that they are a part of the worldwide Anglican family.”