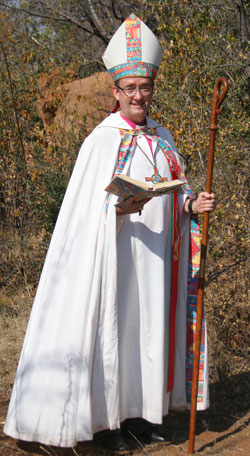 The Anglican Church of Southern Africa has urged its bishops to provide guidelines for giving pastoral care to same-sex couples who have entered civil unions under South African law.

The Church’s ruling Provincial Synod, currently meeting in Benoni, South Africa, on Friday adopted a resolution urging its Synod of Bishops to finalise guidelines “as soon as possible”.

The Church neither marries same-sex couples, nor ordains or licenses priests or deacons who live in same-sex unions. This is in line with the practice of the worldwide Anglican Communion.

However, in the words of the Right Revd Martin Breytenbach, Bishop of St Mark the Evangelist, during a debate at the Synod, “civil unions are a reality, whether we like it or not.”

Proposing the resolution, Bishop Breytenbach acknowledged he was on the “conservative” side of the debate. But, he continued, all God’s people needed pastoral care and “we have people in our church who are same-gender couples who regard themselves as married, even though I find it difficult to accept.”

The Right Revd Garth Counsell of Table Bay – from the diocese of Cape Town, which is seen as more open to recognising same-sex marriage – said the resolution was “not talking about same sex- marriage or whether we will do that or not.” It was rather about “confronting legal reality”.

“Within our membership we do have people who have exercised their right to be in committed civil unions, and the reality is that they are fully committed members of our church. We have a responsibility to be pastorally caring to people in our pews irrespective of who they are.”

Bishop Breytenbach said the guidelines being worked upon involved “living with tension”.

He referred to the church’s breadth of approaches to the issues it faces: on some, rulings might bind the whole church across Southern Africa. On others, individual dioceses could have discretion to adopt their own guidelines.

There might also be situations in which priests could exercise their own discretion, sometimes in consultation with their bishops, and some matters might be left to the individual consciences of church members.

He also highlighted the need to look at the guidelines within the wider context of the church’s approaches to marriage, divorce, polygamy and other related perspectives.

The Right Revd Jo Seoka, Bishop of Pretoria pointed to the human realities at stake. He referred to the pain expressed to him by a young man who wanted to marry his partner. The man accepted that a priest could not marry him, but he was hurt by the fact that his father, an Anglican parishioner, could not escort him down the aisle without breaching church norms.

The full text of the resolution adopted by the Synod reads:

1.1 The progress that has been made by the Synod of Bishops and various Dioceses in developing guidelines for pastoral ministry in response to Civil Unions, and to those who experience themselves as homosexual;
1.2 That we have accepted Resolution 1.10 of the Lambeth Conference 1998 as the basis for our engagement with the issues of human sexuality
1.3 That we are still not of one mind on these matters.

2.1 That God calls us to love and minister to all people, regardless of their sexual orientation, while at the same time upholding God’s standards of holiness;
2.2 That this is a highly complex and emotive area which affects many people deeply and has a far reaching impact on the mission of the Church.

3.1 To journey together in humility and mutual respect as we seek God’s mind on the difficult issues of human sexuality;
3.2 To continue to engage in a process of listening to the whole variety of experiences and viewpoints so as to increase our understanding of these issues;

4.1 Respectfully request the Synod of Bishops to work towards finalising the Guidelines for pastoral ministry in response to Civil Unions as soon as possible.