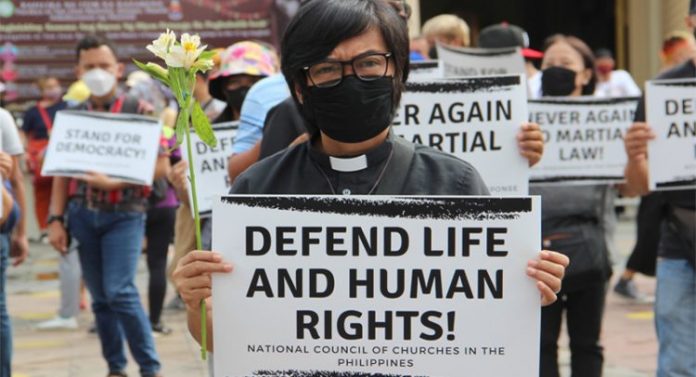 “Speak up for those who cannot speak for themselves, for the rights of all who are destitute.
Speak up and judge fairly; defend the rights of the poor and needy.”

For the National Council of Churches in the Philippines, the state of human rights in our country is in a state of brokenness. When human rights are denied and violated, God’s image is also violated in us, as we are created in God’s image. It is therefore our continuing duty as Christians to claim, restore and defend whatever rights have been denied and trampled upon.

December 10, 2022, is the 74th anniversary of the Universal Declaration of Human Rights. The Declaration recognizes dignity and rights as inherent and inalienable to all human beings. The Philippines was among the 48 countries that voted for the Declaration and has its principles enshrined in our Constitution.

However, the full enjoyment of human rights by the Filipino people remains elusive.

Prices of food continue to soar especially on agricultural products that were affected by various policies on import liberalization including that of the Rice Tariffication Law. Thus, many families are going hungry each day, as prices of basic commodities shoot up, and people continue to suffer.

Sadly, the solution of the government under President Ferdinand Marcos Jr. is to resort to more borrowing despite a P12.1 trillion debt that it inherited from the Duterte administration, and to come up with highly dubious financial schemes like the much-criticized Maharlika Wealth Fund.

Meanwhile, the climate of impunity continues to worsen. According to the University of the Philippines Third World Studies Center, there have been 127 deaths connected with the war on drugs from July 1 to November 7 this year, mostly attributed to state security forces.

President Marcos Jr. has also inherited his predecessor’s machinery against legitimate dissent like the Anti-Terrorism Law and the Anti-Terrorist Financing Law. Thus, the constriction of civic and democratic spaces continues and there are more vicious patterns of attacks against human rights defenders.  According to Karapatan, 937 human rights defenders have been killed since 2001.

The practice of filing trumped-up charges against activists, and human rights defenders, including among church people, continues in many parts of the country. Rev. Glofie S. Baluntong, of the United Methodist Church who has been serving our Mangyan sisters and brothers on the island of Mindoro for many years, has recently been falsely charged with violation of the Anti-Terrorism Law.

The other church people who are facing trumped-up charges and are currently detained are Pastor Jimmy Teves, a lay pastor of UCCP; Rev. Nathaniel “Dodo” Vallente, of the UCCP, a peasant advocate, and, Aldeem Yanez of the Iglesia Filipina Independiente (IFI), former NCCP Vice Chairperson for Youth and a composer of hymns.

The Rural Missionaries of the Philippines (RMP) and the UCCP Haran and UCCP Fatima in Bohol are facing cases related to the Anti-Terrorism Financing Act.

Meanwhile, the NTF-ELCAC continues its red-tagging overdrive of various individuals and groups including churches and church leaders. They conduct smear drives and disinformation in online and offline spaces. The military also “visits” communities and parishes only to sow fear in the people, branding activists, church leaders, and organizations as supporters or members of communist terrorist groups. Recent subjects of their attacks include the UCCP, and Bishop Emelyn Dacuycuy of the IFI Diocese of Batac, Ilocos Norte.

Rev. Edwin Egar, UCCP pastor, and Karapatan Southern Tagalog Interim Officer was visited by elements of the 59th Infantry Battalion of the AFP. He was asked to surrender and was also told that he was a target of a search warrant. He and his wife, Rev. Julieta Egar, and former barangay captain Ronald Ramos, a UCCP member, filed for a writ of amparo against several ranking military officials.

We thus call on the government of President Marcos, Jr. to follow all international human rights standards and to heed the various recommendations made by member states during the 4th cycle of the Universal Periodic Review (UPR) of the UN Human Rights Councils. Especially recommendations calling for a stop to red-tagging, a review of the Anti-Terrorism Law, and even the abolition of the NTF-ELCAC.

As bearers of Christ’s love and righteousness, we fervently call on the churches for continued prayer and action in championing and defending human rights, especially of those who are poor and oppressed and to be united in restoring wholeness and the image of God in all of us.