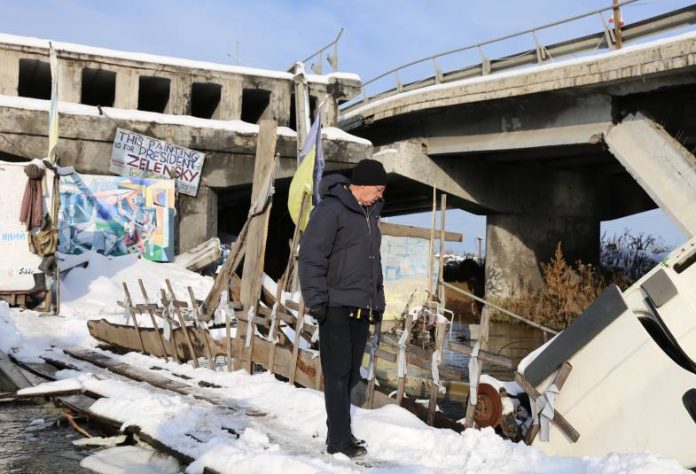 The Archbishop of Canterbury visited the site of a mass grave in the outskirts of Kyiv today to express his condolence and solidarity with those who suffered through Russia’s occupation earlier this year.

The Archbishop visited St. Andrew’s Greek Catholic Church in Bucha where he prayed with its priest, Father Andriy Halavin, and prayed alone at the spot where 116 bodies are buried.

He was shown photos of murdered civilians and the communities’ response in burying the dead in a deeply emotional photographic exhibition displayed at the church.

Archbishop Justin also visited the so-called ‘Bridge of Hope’ in Irpin. There he heard accounts from local priests who were involved in efforts to help people escape under Russian fire, via the only route out of Russian-occupied Bucha and Irpin.

The Archbishop paused at the crosses lining the planks across the river, commemorating people who died trying to escape, and prayed for those who mourn them.

The Archbishop made the tour with the Anglican Bishop in Europe, Bishop Robert Innes, who is accompanying the Archbishop during his visit to Poland and Ukraine.

Archbishop Justin was led around Irpin and Bucha by Ivan Rusyn, a Baptist minister and president of the Ukrainian Evangelical Theological Seminary (UETS), which was struck by six Russian missiles in early March a few days after he and his staff were evacuated. Ivan and his colleagues told the Archbishop about the horrors that local people endured as they tried to escape the Russian invasion and occupation.

Later the Archbishop visited UETS where he met with faculty and students to hear their testimonies of Russia’s invasion and occupation. He later prayed with the students and gave them a blessing.

Archbishop Justin Welby said today: “Russia’s invasion of Ukraine is an act of evil. Being in Irpin and Bucha today has made my conviction of that even stronger. War unleashes the forces of hell and today I met people who have been through that hell.

So often in places of war and conflict, the church suffers alongside the communities it serves. Today I met heroic priests, seminarians and local Christians who – even amidst their own agonising suffering through this brutal invasion – have loved, cared for and supported those around them. I feel today that I have touched the hem of Jesus’ cloak and seen his face in the faces of the people of Irpin and Bucha.

It was a great honour to spend time with the faculty and students of the Ukrainian Evangelical Theological Seminary. I give thanks to God for their courageous faithfulness to Jesus Christ. They will remain in my prayers for a very long time – as will all the people of Ukraine.”

Reflecting on visit to Ukraine as it drew to a close, the Archbishop said: “It has been a profound privilege to visit Ukraine. This visit has made me even more determined to stand in solidarity with the heroic people of this country. I have been so struck by the bravery, resilience and faith of the people I have met.

But I have been struck too by the magnitude of evil that has been unleashed by this unjust invasion – which means that our resolve to stand with Ukrainians in their struggle for freedom must be even greater.

I appeal to the Church of England, the Anglican Communion and Christians around the world to pray for Ukraine this Advent – and for all people around the globe living through conflicts and injustices.”

He also attended a meeting of the Ukrainian Council of Churches and Religious Organisations where he heard from religious leaders of Christian, Jewish and Muslim communities in Ukraine about their experience of war and the determination of the Ukrainian people. The meeting was held for part of its duration in a bomb shelter in a central Kyiv hotel after air raid alerts sounded.

Read more about the Archbishop’s visit to Ukraine here.