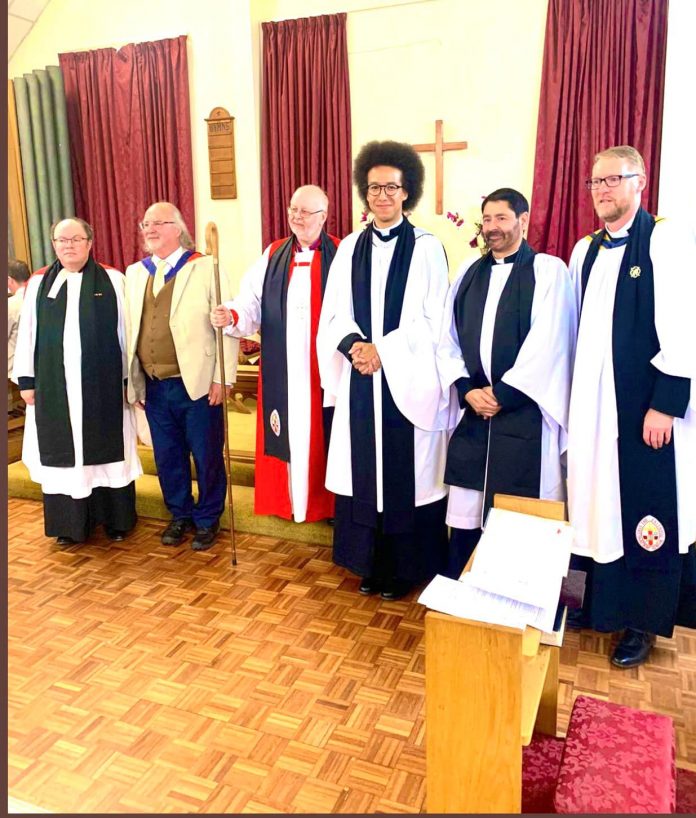 Great to be here today. We’re here because we’re friends of Calvin. We’re his friends and admirers, but also and more importantly perhaps, because we’re in love with Jesus. It’s He who brings us together. I thought perhaps the best way to begin was to tell you of the time when I was sent shopping with my baby daughter who was two. I went with some carrier bags and a pushchair to the local supermarket. I went in, I bought the things I had to buy and ticked them off on the list, I filled the baskets, and I went home. When I got home I discovered that I had the shopping, but I had completely forgotten my daughter, who was in the pushchair somewhere in the supermarket. So I dropped the shopping, and rushed back to the supermarket, and thank God there she was! She hadn’t been kidnapped, she hadn’t absconded, nobody had noticed. The social services were held at bay… even my wife didn’t hear about it. It’s a long-standing secret between me and my daughter. Although, from time to time when she wants money or a favor, she reminds me that “a story has not yet been told… and it could be.”

So, I remember the panic I had when I left her behind and something of that panic is what we find in the Gospels today. Luke is telling us about this event in the life of Jesus, and he may be telling us to remind those of us who’ve lost our children once upon a time how lucky we are not to have lost them permanently. That would be worthwhile remembering, but of course, there’s something much more profound in this Gospel passage he wants us to understand. It’s to do with the way in which God allows crises to bring the truth out in the Church. This was a domestic crisis brought about by the fact that Jesus was twelve years old on the transition from being a child to a fully-fledged member of the community. He marked that transition by tending to the Father’s business, but his parents were in the normal routine of things and hadn’t noticed that they were at this crossroads. Until they didn’t pay attention to where he was, they went on as they normally did, and found themselves in a crisis. They went back after three days, nothing compared to my three-quarters of an hour, and they found him.

The Gospel is full of crises. In fact, you might say this is the first crisis of many that Saint Luke and the other Gospel writers will bring to our attention. Some of them were very serious. Remember Peter, who had a crisis of keeping faith with Jesus until the very end. Sts. James and John had a crisis when they wanted to repay people with thunder and lightning bolts. Judas had a crisis, about where his true loyalties lie, in terms of how he understood the Kingdom of Heaven. To follow Jesus will always involve us in one crisis or another because the life that we get used to living will, from time to time, come into a clash with what God intends for us. Then, we can either pretend “there is no crisis” and continue the way in which we always have done things, or we can pay attention to what the Holy Spirit is doing in our lives. We have a crisis now, a crisis in the church.

If you look back into the history of Anglicanism, we’ve never not been free of apostasy or crises. Indeed, I think in the last three hundred years we’ve had a crisis God has responded to; first in the 18th century with Wesley. Wesley, who loved Jesus and the gospel, refused to accept the apostasy of the Church of England. He put the gospel and his love of Jesus first and the fruit of it was utterly extraordinary. In the following century, we had Cardinal Newman, bringing a renewed sacramentality to the church. The church didn’t want it, again, it locked it up. But, out of the sanctity of who Newman was, and his obedience to the Holy Spirit came this great refreshment of the wider Church. I think in the twentieth century the charismatic movement was another response of God to the crisis of secularism and the apostasy of the church. Now, the centuries have turned and we find ourselves with another deepening crisis.

Who knows what this crisis is? It’s hard for us to tell, but what we do know is that the Anglican Church in particular is failing to understand what’s going on. How do we know that? Just by using the test of the Holy Trinity. The Father, whose business Jesus was about wants us to come to know him as Abba, but if you have a society in which masculinity and fatherhood become “toxic,” how difficult is it to introduce people to God their Father? If gender and sex become so conflicted and such a matter of trauma, that the normal access to God the Father becomes a matter of theological, civil, and psychological disturbance, then bringing people to their Heavenly Father who gave them life in the first place, becomes a matter of profound civic tension.

Coming to Jesus, we come to him as the logos as the Word, we come to him as God made flesh. He’s not a relativistic teacher who wants to amplify our spirituality, and yet the church finds itself with competing spiritualities in the world and has demoted Jesus. This isn’t the first time it’s happened, there was a huge Arian controversy once. I’m not going to lecture you on Arianism, but essentially Arianism is a demoting of Jesus, from being the Living Word who comes to save us from hell. Putting Him instead in a sub-context, in a bracket for someone whose advice one might like to take if you want to flourish in certain ways. He’s not that, but that’s how the church is beginning to teach Jesus because He tells us uncomfortable things; that he is the way, the truth, and the life, and you cannot come to the Father except by him.

This whole revelation is a source of profound offense today, and if we allow the Holy Spirit to tell us something about the crisis what we discover is that Holy Spirit wants to lead us into Holiness. When we look into our society we discover there are “unholy spirits,” and unholy spirits want to take us in a separate direction. Without going into a full analysis of the culture we live in; it is a culture where we find access to the Father blocked by toxicity, it is a culture that finds access to Jesus shrouded by relativism, it’s a culture that finds access to the Holy Spirit muddied by other spirits. But, what does God do in a crisis? He raises up people who love Him to serve Him.

Krísi in Greek is “judgment.” Judgment is not always bad, it brings things to the surface and brings them to light. I’d far rather be a Christian today, in 2022, than when I was ordained deacon in 1980. It wasn’t clear in 1980. We did the normal things, we preached the gospel, we baptized people, we heard confessions, and we brought people to church. The fault lines of what we were struggling with in the West weren’t clear. Now, today, they’re crystal clear. We’re fighting a totalitarianism, we’re fighting a battle against evil, we’re fighting against spirits that hate Jesus, hate the Church, hate the Father, and hate Christians. In a way this is a wonderful privilege, here we are given the privilege of the Lord to serve him in this profoundly contested moment, and actually offered Him a sacrifice of our lives and our integrity.

To come to this moment, Calvin has made a great sacrifice. It would have been much easier to go on in the normal routine of established religion. But, the doors are closed to the life of the Spirit in that direction, and so that brings us to this point. Everybody here has been brought here because you have a ministry in the Holy Spirit, Calvin, to the diaconate and God willing to the priesthood and beyond that. Each one of us here is beloved by Jesus, called, anointed, and invited to serve him. Who knows what God will do through your faithfulness as you respond to the gift of the Holy Spirit. The struggle wherever you serve Him, in the church or society, is exactly the same one. It is to bring honor to Jesus, to bring people to Jesus, so they can be reconciled to the Father and so the Holy Spirit can purify our hearts. It’s a great joy to be here today. We are celebrating the victory Of God over all crises. His good and holy and saving judgment in our lives, to Him be the praise and glory, now, and unto the ages of ages. Amen.