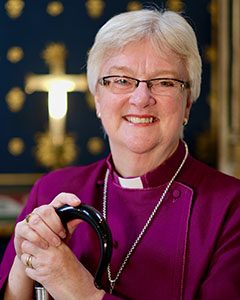 Disciplinary action against the Bishop of Llandaff has come to an end following the withdrawal of a complaint against her.

The Bishop of Llandaff, June Osborne, was due to appear before the Church in Wales Disciplinary Tribunal following a complaint by the Dean of Llandaff, Gerwyn Capon.

Mr Capon has now voluntarily and unconditionally withdrawn his complaint and as a result the case has been dismissed by the President of the Disciplinary Tribunal.

The Proctor, the lawyer tasked with presenting the complaint to the Tribunal, told the President that the Dean had “reached a clear and settled decision” to withdraw his complaint and there was “insufficient evidence to satisfy the burden of proof” to the required standard.

Concluding the proceedings, the President, Mark Powell QC, praised the Dean’s actions. He said, “In my experience, cases such as these can quickly escalate out of control. It takes significant courage and grace to take a step back and reconsider one’s position once formal processes such as these have begun. I hope that this can be the trigger for healing and reconciliation between all involved.”

Bishop June welcomed the decision. She said, “I am pleased to learn that this matter is now resolved and the proceedings dismissed. It has been a challenging time for Llandaff Cathedral and the Diocese. I am grateful for the support I have received from my colleagues and ask that we continue to keep the Dean in our prayers.”

The Archbishop of Wales, Andrew John, said, “I welcome the clarity of the President of the Disciplinary Tribunal’s order and that this matter has now reached a conclusion. My hope is that there is now a fresh opportunity to rebuild trust and to seek healing.”