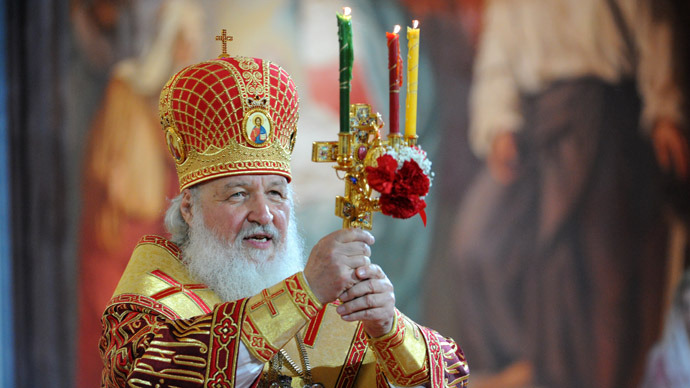 On March 18, 2022, His Holiness Kirill, Patriarch of Moscow and All Russia, presided over the work of the Supreme Church Council of the Russian Orthodox Church, the Patriarchal Press Service reports. Opening the meeting, His Holiness addressed himself to the participants with the following introductory remarks:

I cordially greet all the members of the Supreme Church Council.

After our previous meeting, a long time has passed and a great many events have happened. Today we are to make a number of decisions according to the agenda, but besides that to exchange opinions on the developments, in the first place, on what is happening in Ukraine and how it affects the inter-Orthodox and inter-confessional relations. I will share information about my video meetings with the Pope of Rome and the Archbishop of Canterbury, when we discussed in detail primarily the problems of the security of people in Ukraine, as well as the relations between the Orthodox and Catholics as also linked with the Ukraine issue. All this is important for our relations with the Catholic Church, with the Anglican community and certainly for the Patriarch’s bilateral relations with the Primates of these Churches. I think the meeting, though remote but a real, face-to-face, was positive for both the preservation of good relations between our Churches and for the formation as far as possible a common attitude to the situation in Ukraine.

I would also like to say that the events in Ukraine demand that we make not only a serious analysis from the ecclesial perspective, but also our prayers, and to stress once again that the Russian Church, despite the very negative political context, is called today to preserve the spiritual unity of our people – the Russian and Ukrainian peoples – as one nation which has come out of the Kievan baptismal font. Without doubt, this unity is exposed to certain dangers in the situation of hostilities, and if we speak of an external factor, then the internet space, the information space, has also become a battlefield, and in this space there is much disinformation, downright lie, provocative statements, which can arouse negative feelings among people, prevent a speedy resolution of the conflict and reconciliation. In this context, I consider as especially important what is happening today in our Church – in the Russian Federation, in Ukraine, in Byelorussia, in other countries. I believe that the stand taken by the Church can become a real peace-making factor for making a positive impact on the developments in Ukraine, a country fraternal for us. We should be especially zealous in lifting up prayers for peace and should certainly accompany our prayers with concrete actions. And the most concrete and important action today is to render assistance to those affected by this conflict – in the first place, refugees, who have found themselves in the territory of the Russian Federation.

The aid to those affected by the conflict is met with broad public support, and we are going to intensify our efforts in our service of the neighbour, thus contributing to the reconciliation of our peoples. But in any historical situation, we should carry out our usual work with zeal, to which I call everyone. Most of all, it is the work of prayer and indispensable efforts to preserve good relations between peoples who have found themselves involved in this conflict. The Church cannot be a bearer of any other signal than a peace-making one because our flock is everywhere, on the either side of the barricades.

Now a few words on today’s agenda. We will discuss a number of issues, in particular the introduction of a distance education system for seminaries. This project is realized under the Education Committee as part of the theological education reform and is an open-ended issue for the Supreme Church Council. Today we will again pay attention to this topic, which has been really one of the most important ones on our agenda for a long time. I believe the distance format, which has begun to be introduced in the system of theological education, will make our education in seminaries and academies more accessible and will certainly allow to enlarge the coverage, that is to say, to target the work on a broader audience.

Technologically, everything is perfect today – the quality of the TV picture is so remarkable that it gives rise to an illusion of co-presence. However, for all that it is obvious that the remote format is not sufficient, and it is possible only in a context of awareness that it is only an additional tool in the education process. By no means, however tempting it may be, the remote format should not become the principal, basic and leading – it can be regarded as only an auxiliary and additional one.

The development of the vocational competence of the clergy is involved in the next agenda item. We have accumulated a certain experience in this area, and the system of raising the level of skills produces positive results. We will discuss today this system as well, and I will ask Father Maxim to present his considerations.

I would like to say once again that a considerable attention was certainly given to what is going on in Ukraine as well. Once again, I would like to stress the importance of the fact that my personal remote contacts with both the Pope of Rome and the Archbishop of Canterbury have revealed a high level of consent and understanding. And, perhaps, the most important impression is that our interlocutors have not moved away from us, nor have they become our enemies, and this means that the political context, by God’s grace, have not destroyed the relations we have developed with our brothers or, as they say today, partners, despite the resounding criticism from a certain part of our church community. You remember all those calls to withdraw from the World Council of Churches, to discontinue bilateral relations; we were told that it was a betrayal of the Church, etc. Well, now we can see that if all this had not existed then our Church could have become fully isolated and we could not have the least opportunity to convey to our partners our understanding of the situation, our view of the developments And, which is the most important thing, we would not have chances to see in these partners those who regard the stand of the Russian Orthodox Church with understanding. Therefore, we have existentially received a convincing validity of the policy of developing relations with Orthodox and non-Orthodox Christians, which our Church began to pursue in the post-war years. Of course, our participation in the work of the World Council of Churches was a very important factor of developing these relations and creating an atmosphere of confidence, which helps us so much in this situation.