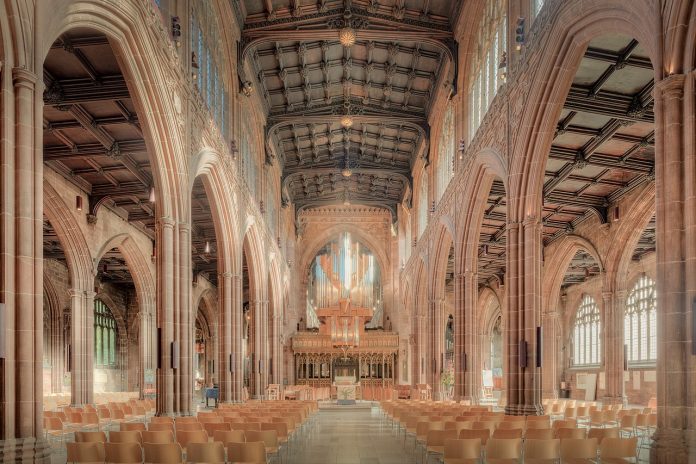 Evensong at Manchester Cathedral attracts a disparate crowd. There are people you wouldn’t expect, like a young mother, all blonde highlights and dry shampoo. Several older couples. A younger man, in jeans and a tweed jacket, with a rucksack at his feet. The air smells mildly of disinfectant, and I look around, as writers do, avoiding eye contact and making mental notes.

The cathedral is old and beautiful, a brooding mass of stone and slab, arch and point. It sits, a great Gothic hulk, amongst the gleam of modern Manchester, not far from Victoria station. It is a landmark and, during the pandemic, provided somewhere to head during my long and pointless lockdown-busting walks around the anaesthetised city. Naturally, I started going in. The epic space and the vast, numinal nave roof called me back.

I am one of many Millennials who, if not reconnecting with Christianity, are disconnecting from the brutal nihilism of the modern world. Church attendance amongst the under 40s is on the rise. A good chunk of those young men and women don’t even describe themselves as believers. Belief, I think, is almost irrelevant. Twitter and the twenty-four hour news-cycle is no place for a creature with a soul.

“Aha!” chimes in Professor Alice Roberts, and the various self-styled “humanists” who have spoken so regularly and listened so rarely in recent years: “There is no evidence people have souls.”

That is bollocks, of course. We are all more than a mere mass of chemicals. Every maladroit teenage declaration, every fretful sleepless night, and every group of mates laughing in a pub at a salty, unrepeatable joke is proof of that. There is no need, on this issue, to “trust the science”. I don’t care about the science. We’ve spent two years trusting the science, and created a car crash of suffering unheard of in peacetime.