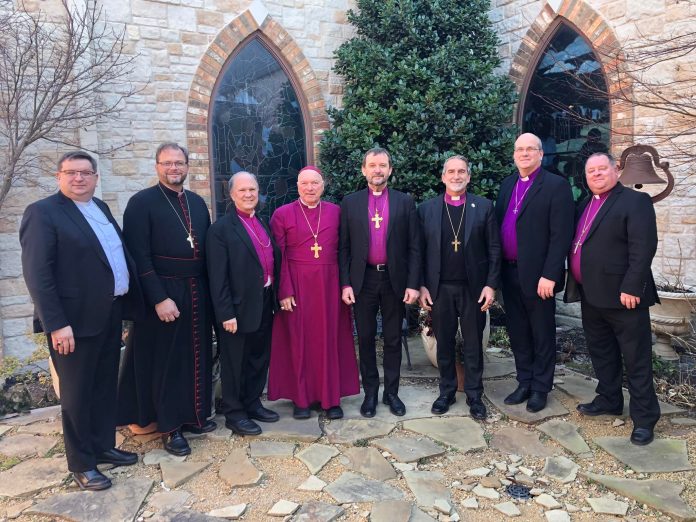 The Primate of the ACNA met with his Latvian counterpart today along with leaders of both churches at an ecumenical dialogue gathering at the Reformed Episcopal Church’s Cathedral of the Holy Communion in Dallas.

On 29 January 2022 the Most Rev. Foley Beach welcomed the Most Rev.Jānis Vanags, Archbishop of Riga and Primate of the Evangelical Lutheran Church of Latvia. Details of the meeting have yet to be released, however,the ELCL is viewed as the most traditional minded of the Baltic Lutheran churches.

Founded in the 12th century by Catholic missionaries, the church in Latvia followed the Lutheran path during the Reformation, along with the church in Sweden, Denmark, Estonia and Finland. Following independence from Russia in 1918 the Latvian Church formed close relations with the Church of Sweden and adopted a reformed episcopal polity and through the Swedish bishops the church’s three diocesan bishops now claim full apostolic succession.

The amendment did not touch upon the ministry of currently ordained women priests, and allows them to continue to serve in the church. However since 1993 the church has ordained women to be evangelists — comparable to deaconesses in the Anglican tradition.

The Latvian church consists of three dioceses (Riga, Liepāja and Daugavpils) with 300 congregations in the Baltic state and has 136 priests and 86 evangelists. Statistics compiled by the Latvian Ministry of Justice report the church had 712,530 members in 2014, of whom 43,000 were active communicants.