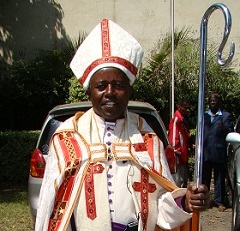 The Bishop of Nairobi appeared before a magistrate’s court this week on two criminal charges of sexually assaulting a female priest.

The Rt. Rev. Joel Waweru, who was elected to the standing committee of the Anglican Consultative Council in 2016, was arraigned before Senior Principal Magistrate Derrick Ruto of Kibera Law Courts on 12 January 2022, accused of repeatedly harassing a female priest. He is alleged to have grabbed her breasts and attempted to kiss her. When the priest rebuffed his advances, the bishop retaliated by dismissing her as archdeacon, reducing her salary and transferring her to another parish.

The indictment states: “On diverse dates and different times at Otiende in Lang’ata, Nairobi being a person in the position of authority persistently made a sexual advance at JNM knowing or having reason to believe that such advance was unwelcome by the said JNM thereby interfering with her work”.

Bishop Waweru posted a Sh50,000 bond and was ordered to appear in two weeks. The case continues.

Sources in the Kenyan Church tell Anglican.Ink the Most Rev. Jackson Ole Sapit has sought to bring BIshop Waweru before a church court on charges of misconduct, but has so far been stymied by Bishop Waweru’s allies in the House of Bishops. With the criminal indictment, our sources explained, the archbishop can now move against Bishop Waweru.