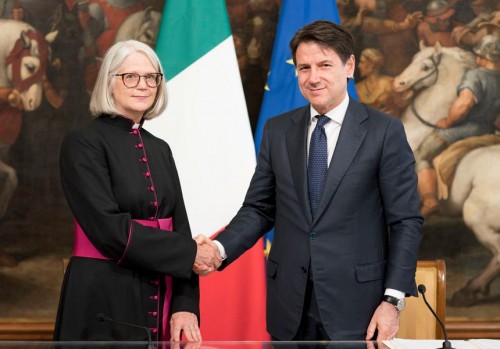 The Associazione Chiesa d’Inghilterra (also known as ACDI, which is the Association of the Church of England in Italy) has now completed the final step of the approval process for their ‘Intesa’, or Treaty, with the Italian Republic.

On Wednesday, 15 December the I Commissione Affari Costituzionali of the Camera dei Deputati (lower house at the Italian Parliament) agreed the Intesa, following its approval at the Italian Senate, concluding a process which has been in the works for nearly fourteen years.

In 2012, the Associazione Chiesa d’Inghilterra was incorporated and in 2014 recognized by Italy’s President, but the hammering out of the details of the actual treaty continued over the next years.

In 2019, Revd Canon Vickie Sims signed the draft of the treaty with Vice-Premier Giorgetti, followed by a signing of the final document with Prime Minister Conte in July 2020. Several more steps through government committees were necessary before the final bill was presented to the Italian Parliament, at first to the Senate in Jan 2021 and then to the Camera dei Deputati in November 2021, and the final vote at the Camera dei Deputati in December.

The Intesa recognises the historic presence of our Church of England chaplaincies in Italy, and enables our chaplaincy churches and congregations to integrate more fully into the Italian legal, social and fiscal system. ACDI will appear on Italian tax residents’ return forms allowing people to ‘opt in’ 8/1000 of their taxes to ACDI. It will be easier to obtain visas for clergy to live and work in Italy. Clergy will be able to work under specific clergy contracts and participate in the Italian clergy pensions schemes. Church of England clergy who are also Italian citizens will be able to preside at marriage ceremonies as ‘registrars of the state’, much as Church of England clergy do in the UK. It will also be easier for clergy and chaplaincies to offer ministry in hospitals, prisons, and schools. Our capacity to work ecumenically on ethical and social issues, such as migration and integration, will be enhanced.

Our sincere thanks go to Dr Paolo Coniglio-Pringle of Holy Cross, Palermo, and Prof Salvatore Bordonali, former professor of Ecclesiastical Law at the University of Palermo, for their hours and hours of pro bono work on behalf of the church over these many years. The support of HM Ambassador Chris Prentice (retired) and his successor HM Ambassador Jill Morris and her wonderful staff were vital to this positive outcome.

There is still work to be done to modify our governance structures to comply with certain aspects of Italian law, but we move forward on these issues with a sense of renewed hope and confidence in our mission to English-language speakers and Italian-speaking Anglicans.