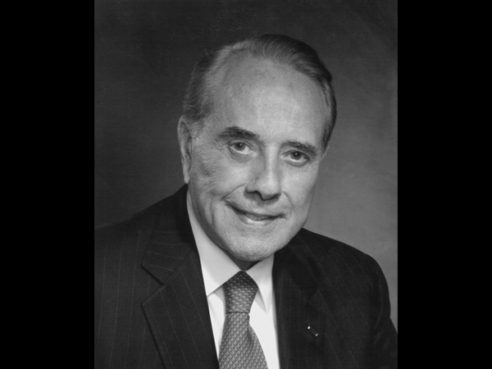 From his brave service in World War II to his decades on Capitol Hill, Senator Bob Dole was a model of patriotism, service and a commitment to the common good. We join the nation in giving thanks for the life of this dedicated public servant, and hold the entire Dole family in our prayers.

Washington National Cathedral is honored to host Sen. Dole’s funeral on Friday, Dec. 10, 2021. The service is by invitation only, but a livestream will be available.

In every generation, there are citizen statesmen who emerge from personal struggle to point America back to its better self. Motivated by a sense of duty and gratitude for the blessings of this land, they remind us what it means to believe in something larger than selfish ambition.

Senator Bob Dole was one such patriot, and we pray for the extended Dole family as the nation mourns his death. We give thanks for his decades of service to our nation, and for his example of heartland decency and courage in sacrifice.

Historians and pundits will no doubt parse his politics and policy positions, but every American can see in Senator Dole a portrait of bravery and quiet dignity. Senator Dole gave more on the battlefield than most of us ever will be asked to give, and spent his entire career advocating for and celebrating the service of our veterans.

As he rose to leadership on Capitol Hill, he embodied a commitment to compromise and civility. Despite his sharp political elbows, he never demeaned, diminished or disparaged his opponents. He was, quite simply, a gentleman from the prairie who saw the goodness of America and worked tirelessly to preserve it.

This Cathedral is honored to host Senator Dole’s funeral on Friday, Dec. 10, and we invite everyone to join us online as we celebrate a great American life.

Together with all the saints in glory, we give thanks for his life of public service and personal sacrifice. Into your hands, O merciful Savior, we commend your servant Robert. Acknowledge, we humbly beseech you, a sheep of your own fold, a lamb of your own flock, a sinner of your own redeeming. Receive him into the arms of your mercy, into the blessed rest of everlasting peace, and into the glorious company of the saints in light. Amen.