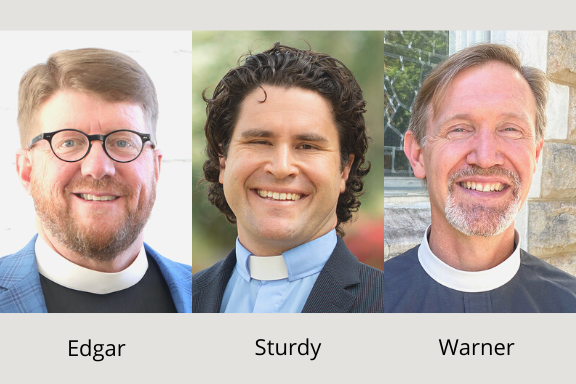 The Bishop’s Search Committee is very pleased to announce three final candidates for consideration for the next Bishop Coadjutor of the Anglican Diocese of South Carolina. In alphabetical order, they are:

The candidates were chosen during a long search process that began with the initial diocesan approval at the Diocesan Convention in 2020 and will culminate with the election of a new bishop at Diocesan Convention in 2022.  The Search Committee, a mixture of clergy and laity, were chosen by diocesan election during the winter of 2020 and met for the first time in the summer of 2020. The Committee then met weekly by Zoom and met in-person at least quarterly.  The Committee operated under the principle that God has already chosen our next bishop and that our diocesan election will simply reveal whom that person is that has been pre-selected by God.

The next step in the election process will be to provide the diocese with a series of what are called “walkabouts” to be held in various locations throughout the diocese.  The walkabouts will provide an opportunity for the upcoming delegates to the election to meet and get to know the candidates. The walkabouts will be held September 13-16 in Georgetown, Florence, Charleston and Beaufort. Because of the limited size of the venues, only elected delegates will be able to attend these walkabouts.

Introductory videos and spiritual autobiographies will be recorded and made available to all members of the diocese, on the diocesan website, www.adosc.org.  Additional information about each candidate will also be printed in the upcoming issue of the Jubilate Deo.

The Special Electing Convention is scheduled for Saturday, October 16th, 2021 at Christ Church in Mt. Pleasant. The College of Bishops of ACNA will hopefully approve the election at their winter meeting in January, 2022 and God willing, the new Bishop Coadjutor will be consecrated at the Diocesan Convention, March 12, 2022.

Dean Edgar is the Planting Pastor, Rector and Dean of The Cathedral Church of the Apostles (Diocese of the Carolinas) in Columbia, SC, where he has served since 2004. During that time, he oversaw the growth of the church from a core group of 25 to an average Sunday attendance of nearly 400.  He served as the Rector of St. Mark’s Episcopal Church, Glen Ellyn, IL from 1997 – 2004; as the Canon Pastor at the Cathedral Church of St. Luke in Orlando, FL from 1994 – 1997 and as the Curate at St. Paul’s Church, Chattanooga, TN from 1993 – 1994. Dean Edgar has been married since 1989 and has five children.

From his profile:
“I have a strong background in pastoral ministry and parish leadership, and a passion for seeing people come to know and live out the grace of God through Jesus Christ in their lives. I want to see churches live out the values of the Kingdom of God in every area of life.”

Dr. Sturdy has been the Anglican Chaplain to the Corp of Cadets at St. Alban’s Anglican Chapel at the Citadel, Charleston, from July 2017 to the present. He served as Associate Rector at St. Andrew’s, Mt. Pleasant from 2012 to 2017 and served as the Rector at Trinity Church, Myrtle Beach from 2008 to 2012. Prior to becoming their Rector, he served as their Curate from 2006 – 2007. Sturdy  teaches in the DMin program at Trinity School for Ministry in Ambridge, PA. He is an active participant on the leading edge of international scholarship in the area of historical theology. He has been married since 2005 and has two children.

From his profile:
“The Gospel teaches us that God so loved the world that He gave His only Son. But it is important to remember that God still loves the world and continues to demonstrate an enduring expression of His love for the non-Christian world. Evangelism and apologetics have been constant companions in my ministry and my preaching style is directed as much to non-Christians as to Christians. A rival passion to that of evangelism is the training of leaders, particularly in the realm of theological formation.”

The Rev. Chris Warner has been the rector of the Church of the Holy Cross, Sullivan’s Island and Daniel Island since 2015 and served as Associate Rector from 2002 to 2007 and from 2011 to 2015. He successfully led Holy Cross in a transition from a “seeker” model church to a relational and discipleship model church. Between his two terms of service at Holy Cross, he also served as rector and director of St. Christopher Camp and Conference Center. With a staff of 60, he transformed the camp to become a ministry of rest, restoration, and renewal. He has been married since 1993 and has three children.

From his profile:
“My call from the Lord is to teach, preach, pray and lead (Acts 6:4) and my purpose in life is to know God and make God’s glory known. This glory is the glory of the One and Only Son who is full of grace and truth (John 1:14). My passion has been to help people come alive in Christ, live from the Father’s heart as his beloved children, and then grow as disciples who make disciples of others. My great loves in this life are my wife Catherine and our three children: Anna, Caroline and Nathan.”