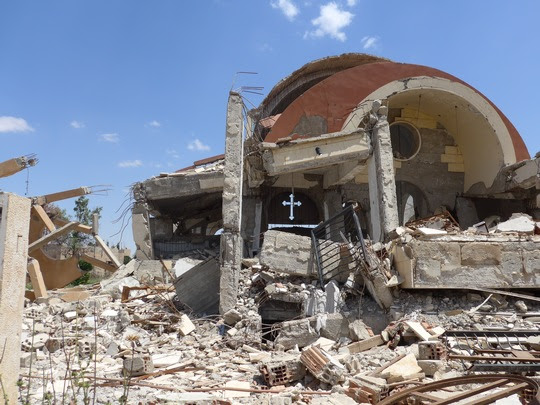 The UN Special Rapporteur declared in a statement published on December 29 that unilateral U.S. economic coercive measures “violate the human rights of the Syrian people” and “exacerbate the already dire humanitarian situation in Syria, especially in the course of COVID-19 pandemic,” by blocking the aid, trade and investment necessary for Syria’s health system and economy to function and recover after ten years of brutal conflict.

The signatories to the Open Letter stated that “this form of collective punishment of the civilian population is driving Syria into an unprecedented humanitarian catastrophe.” Among the signatories are Christian leaders, former diplomats and soldiers, humanitarian aid and human rights activists, and legislators.

Nine Syrian church leaders signed the letter, including the Patriarchs of the Syriac Orthodox, Syriac Catholic, and the Melkite Greek Catholic Churches, the President of the Armenian Evangelical Church of Syria and the Pastor of the Arab Presbyterian Church of Aleppo.

After the Syrian conflict began in 2011, the U.S. imposed broad economic sector sanctions as an instrument for regime change. Before the war, Syria was the only country in the Middle East that was self-sufficient in food production. The UN World Food Program now states that Syria is on the brink of mass starvation.

Although the fighting has now ceased in much of the country, over the past year, the U.S. and its allies have ratcheted up the sanctions on Syria, sending its currency into a tailspin and pushing millions of Syrians into poverty.

Sanctions on Syria make it extremely difficult to import the medications and medical equipment necessary to fight the COVID-19 pandemic and other illnesses and conditions, such as cancer, kidney failures, and schizophrenia. “Millions of hard-pressed Syrians will go to bed hungry and cold tonight,” the signatories reminded President Biden.

The Open Letter calls on the new U.S. President “to help Syrians to alleviate a humanitarian crisis that threatens to trigger a new wave of instability in the Middle East and beyond by implementing the UN Special Rapporteur’s recommendation.”

CSI’s International President, Dr. John Eibner – one of the signatories – stated that the “all of the actors struggling for power and influence, and the various weapons they use, have contributed to the suffering of the Syrian people over the past ten years.”

“But today there is growing awareness,” Eibner continued, “that these sanctions are a disproportionate use of economic force and a form of collective punishment of innocent civilians, which harms the weakest, most vulnerable members of society more than those in power.”

The Open Letter concludes, “We believe that the legitimate national interests of the United States can be pursued without collectively punishing the people of Syria by means of economic sanctions.”

Similar appeals are being sent today by the signatories of this Open Letter, and others, to the leaders of other states, among them the United Kingdom, France, Germany, and Switzerland. All of these states have joined in the U.S.-led sanctions campaign against Syria, despite its lack of UN Security Council authorization.