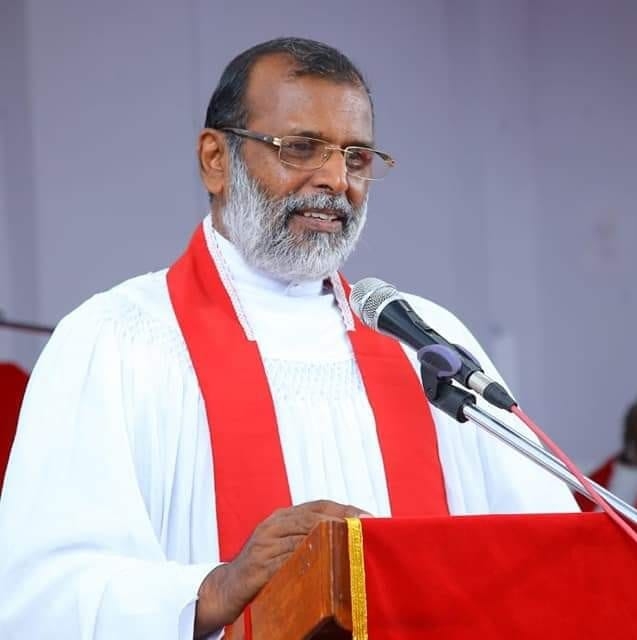 Rev. Dr Sabu K. Cherian, a priest with a missionary’s heart, has been elected as the new Bishop of the Madhya Kerala Diocese of the Church of South India (CSI). The consecration of the Bishop will be held at CSI Holy Trinity Cathedral in Kottayam, Kerala on Monday, the 18th January 2021.

Currently, Rev. Dr Sabu serves as the Vicar of the St Thomas CSI Church in Tholassery. Rev. Dr Sabu K. Cherian, who was ordained as a deacon of the CSI in 1988 and a presbyter in 1989, is 59 years old and now is chosen to lead the Madhya Kerala Diocese as the Bishop in the coming eight years. He started his ministry as a missionary in the Andhra Mission (currently Telangana Mission) where his wife Dr Mrs Jessy Sara Koshy joined him in the mission work as a missionary doctor. Rev. Dr Sabu is blessed with two sons; Mr Sibu Cherian Koshy who is married to Ms Roopa Esther Philip and settled in Ireland and Dr Sam John Koshy who is currently pursuing his post-graduation in Chennai.

During the secular education, Rev. Dr Sabu K. Cherian earned BSc in Mathematics, PGDCA, B.Ed, and MA in Sociology. Later he received his Bachelor of Divinity (BD) from UBS, Pune and Doctor of Ministry from New York Theological Seminary.

While he was a Missionary Andhra Mission (1988 – 1996), he spearheaded medical, educational and church planting ministry in and around the Mogullapally and Chittiyala mandals in Warangal district. He acquired the ability to read, write and preach in the Telugu language. As a missionary, he supported the protest movements of the marginalized labourers for suitable daily wages. He conducted free night schools for the illiterate people in villages.

Later he served St. Andrews Church Kumplampoika (1996 – 2000). During this tenure, he completed the construction of Parish Hall. He was posted as the Vicar of the newly formed Jubilee Church in New York (2000 – 2003). Being the Vicar of the CSI Ascension Church, Kanjikuzhy, Kottayam. (2003 – 2006), he constructed the second phase of the shopping complex and started Free Breakfast Programme for the needy sick people of the Kottayam Medical College Hospital through Sevananilayam. While he serves the St Paul’s Church, Mooledom, Kottayam. (2006 – 2011), he was instrumental in constructing the new Parsonage and renovated the church. At CSI Christ Church in Mavelikara (2011-2013), he started free meal programme for the needy sick people of the Taluk Hospital, Mavelikara and gave leadership for the ecumenical programmes. At St Mary’s Church, Kuzhikkala (2013 – 2014), Rev. Sabu constructed the second phase of the Parsonage. At the St. Thomas Church, Tholassery (2017- Present), he completed the construction of shopping complex phase, focused on the spiritual upliftment of the members and started daily online teleconference prayer fellowships soon after the country went into lockdown, utilized the barren land to start organic farming and promoted green homes (Parish received diocesan level green parish, green parsonage and green school awards for the last two consecutive years), helped the community kitchen by providing agricultural products cultivated from parish property during the pandemic period, and gave leadership for supporting the families affected by floods in surrounding areas.

He was elected as the Treasurer of the Diocese of Madhya Kerala in 2014 for three years. Being the Treasurer, he introduced centralized salary system for all clergy and evangelists, took special care to protect and safeguard the Diocesan property, successfully managed diocesan Bi-centenary celebrations and 35th session of CSI Synod meeting during the demonetization period, renewed rental agreements of the shopping complex tenants, which was pending for decades, in line with the current market rates.The new Bishop hails from the Malayil family in Punnackadu. The Bishop- elect’s father (Late) M. K. Cherian was a retired teacher from CMS High School, Kuzhikkala, and mother (Late) Aleyamma Cherian was also a retired teacher from Government High School, Kozhencherry. The new Bishop has five elder sisters and a younger brother.

The Consecration ceremony will be led by Most Rev. Dharmaraj Rasalam; the Moderator of the Church of South India at the presence of Rt. Rev. Dr Reuben Mark; the Deputy Moderator, Adv. Fernandas Rathina Raja; the General Secretary, Prof. Dr Vimal Sukumar; Hon. Treasurer, Bishops in CSI and from sister churches, Administrative committee leaders of the Diocese, presbyters, sisters, synod members and laypeople.