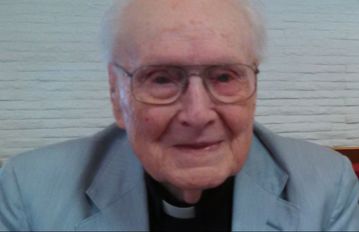 The oldest priest in the Episcopal Church has died at the age of 108. The Rev. Canon Harold Knight, died on Nov 17, 2020 at his home in Mesa, Arizona.

Born in Rochester NY in 1912, he graduated from the University of Rochester in 1934 and from the Colgate-Rochester Divinity School in 1937. He served as a Baptist minister in New York state until 1948 when he was ordained a deacon by the Bishop of Central New York, the Rt. Rev. Malcolm Peabody and priest the following year. He served three parishes in Rochester and Central New York diocese before being called as rector of St Mark’s Episcopal Church in Mesa, Arizona, which he served until retirement in 1977.

Canon Knight served on the advisory board of the Salvation Army in Arizona, was the President of the Mesa Association of Churches, President of the Mesa Community Council and on the Advisory Board of United Fund and was named Mesa Citizen of the year in 1977. In retirement he twice served as interim rector of St. Paul’s Episcopal Church in Phoenix and as a part-time associate at St. Barnabas on the Desert Episcopal Church in Scottsdale.

He is survived by his second wife of 49 years, Edithanne, and his four children, thirteen grandchildren and six great-grandchildren.

A life-long poet, Canon Knight published a collection of poems when he was 92 entitled “The Rivers of Life” inspired by Rev. 22:1.

The river of life is a stream deep and broad, that rises and flows from the temple of God.

Life is the river, with life I am one, the river will flow when my own life is done.

This much I know. I go with the flow.

I was born to the river when my mother gave birth; the flow is nature of all life on earth.

I am swept by the current, captured, not free: I belong to the waters that flow to the sea.

This much I know. I go with the flow.

Life is Gods’ spirit though humanly flawed; The River of life is the life – gift of God.

Life’s flowing river ever will be.

From the Temple of God and Gods bright crystal sea.

This much I know.  I go with the flow.

Services will be held for Canon Knight after the COVID pandemic passes.