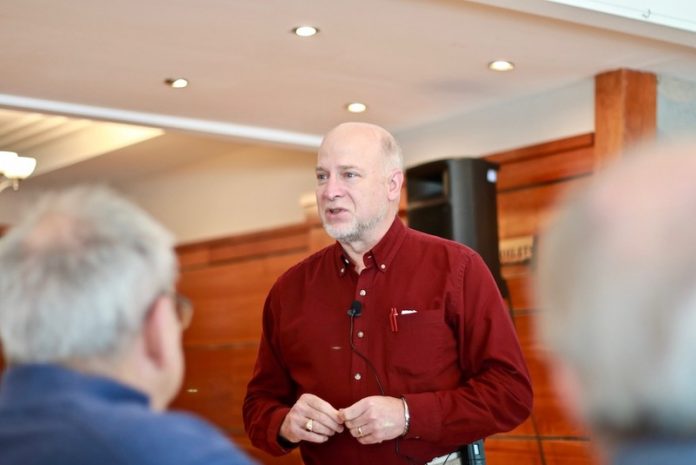 An Episcopal Church bishop facing disciplinary action for prohibiting same-sex marriage rites in his diocese has announced he will resign.

Episcopal Diocese of Albany Bishop William H. Love said in an address to his diocesan convention on Saturday, October 24 that he has entered into a voluntary accord with Episcopal Church Presiding Bishop Michael Curry that discharges any further action from the Hearing Panel. The disciplinary hearing had been scheduled for October 26.

Love’s resignation will take effect February 1 following a one-month terminal sabbatical. Following his resignation, the Albany Standing Committee will become the ecclesial authority in the diocese until a new bishop is elected and consecrated.

In a statement from the Episcopal Church Office of Public Affairs, Curry expressed “sadness for the pain that has been experienced across the theological spectrum” and also “continuing support for the Church’s intention that all persons have access to marriage rites authorized by the Church.”

The Hearing Panel returned a finding of guilt earlier this month, ruling that Love violated his ordination vows and failed to abide “by the Discipline and Worship of The Episcopal Church” in declining to permit his clergy to perform same-sex marriage rites authorized by the General Convention in 2018. Love and his legal team argued that the resolution (B012) was not a properly constituted revision to the 1979 Book of Common Prayer.

“After much thought and prayer, recognizing that whatever disciplinary action would be offered would not be anything I could in good conscience agree to, I have made the very difficult, but necessary decision to resign as Bishop of Albany, effective February 1, 2021 – the 14th Anniversary of my becoming the Bishop Diocesan,” Love announced. “Given all that has happened, and that which was still to come, I believe that to stay any longer would be more of a detriment to the Diocese than a help.”

The Albany bishop did not state what his plans will be after stepping down as diocesan. A statement from Curry “wishes him well in retirement” but Love is only 63 years old. The church’s mandatory retirement age is 72.

Love could assumedly return to parish ministry, or serve as an assisting bishop under the authority of another diocesan. No indication was given that Love will resign his ordained orders in the Episcopal Church, even as he concludes his position as diocesan.

Love is one of few remaining orthodox bishops in the denomination, and the only bishop of a domestic U.S. diocese to proscribe the use of same-sex rites by clergy licensed or canonically resident there.

A handful of other bishops issued a statement October 10 in support of Bishop Love following the finding of guilt from the hearing panel.

“We support unreservedly his convictions on the church’s traditional teaching on marriage,” the Communion Partners statement read. “We remain dismayed that latitude is extended to some in the enforcement of our canons, but not to others. If members of the church who hold the traditional teaching on the question of marriage have ‘an indispensable place’ (Resolution A227) in our church, as the General Convention has said, then securing that place needs to be a priority.”

The statement was signed by the bishops of the dioceses of Honduras, Tennessee, Central Florida, Springfield (Illinois), the Dominican Republic, West Texas, and Dallas.

“During these past 14 years, I have tried as best I could by God’s grace and the empowering and leading of the Holy Spirit to be faithful and obedient to the Lord’s call on my life as a Bishop in Christ’s one, holy, catholic, and apostolic Church. I have tried to be faithful and obedient to God’s Holy Word as best I understand it, as revealed through the Holy Scriptures, recognizing its authority over my life and the ministry entrusted to me,” Love stated in his address to the diocesan synod. “I have tried by God’s grace and the guidance and empowering of the Holy Spirit to faithfully uphold my ordination vows, despite the recent ruling of the Hearing Panel, and to carry out the unique ministry of bishops, as ‘one with the apostles in proclaiming Christ’s resurrection and interpreting the Gospel,’ testifying to ‘Christ’s sovereignty as Lord of Lords and King of Kings.’”