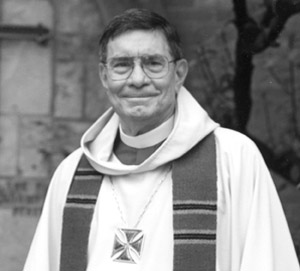 Episcopal bishops in the 1980s were already used to urgent calls from journalists seeking comments on issues ranging from gay priests to gun control, from female bishops to immigration laws, from gender-free liturgies to abortion rights.

But the pace quickened for Bishop William Frey in 1985 when he was one of four candidates to become presiding bishop of the Episcopal Church. A former radio professional, Frey was known for his bass voice and quick one-liners. His Lutheran counterpart in Colorado once told him: “You look like a movie star, sound like God and wear cowboy boots.”

Other Denver religious leaders sometimes asked, with some envy, why Episcopalians got so much ink.

“I can’t understand why some people want the kind of media attention we get,” he told me during one media storm. “That’s like coveting another man’s root canal.”

A Texas native, Frey died in San Antonio on Sunday after years out of the spotlight. In addition to his Colorado tenure, his ministry included missionary work in Central America during the “death squads” era and leading an alternate Episcopal seminary in a struggling Pennsylvania steel town.

While critics called him the “token evangelical” in the presiding bishop race, Frey was a complex figure during his time in Colorado, where I covered him for the now-closed Rocky Mountain News. He called himself a “radical moderate,” while also attacking “theology by opinion poll.”

Nevertheless, a conservative priest called him a “Marxist-inspired heretic” for backing the 1979 Book of Common Prayer and the ordination of women. The bishop opposed capital punishment and abortion and welcomed stricter gun-control laws. He backed expanded work with the homeless and immigrants. At the time, gay-rights activists called him a “charismatic fundamentalist” because he opposed the ordination of sexually active gays and lesbians and preached that sex outside of marriage was sin.

Also, before the presiding bishop election, Frey fielded questions — and heard old whispers — about the informal charismatic Christian community he led with his wife, Barbara (who died in 2014). At its peak, 21 people lived in the rambling Victorian-era house in urban Denver. In all, 65 different people lived there over the years, ranging from two-time Emmy-winner Ann B. Davis — of “The Bob Cummings Show” and “The Brady Bunch” — to an undocumented family from Mexico. The record breakfast crowd was 76.

“Most of the innuendos were the same old stuff — that Bill Frey was a hippie, living some kind of alternative lifestyle. Some people always want to ask us a bunch of questions about who was sleeping in what room,” the late Father Bert Womack once told me. “I’m sure that, for each of us, Bishop Frey was both bishop and shepherd. But he was also just plain Bill. He had to stand in line to get into the bathroom along with everybody else.”

“The bishop’s house” had its roots in missionary life in Guatemala, where the Freys welcomed so many visitors that their five children sometimes slept in tents. The family was forced to flee in 1971, amid rumors the bishop was on an assassination list because of his activism opposing human-rights abuses by the government.

Before landing in Colorado in 1973, the bishop was exposed to charismatic life in Houston and Arkansas, embracing healing ministries, the ecstatic experience of speaking in tongues and other spiritual gifts.

Living in community was never about displays of authority, he explained while preparing to move from Colorado to Ambridge, Pa. It was about an extended family.

“I guess murder was never committed under this roof. … That’s about the only sin or weakness we haven’t wrestled with,” Frey said. “But God has kept giving us forgiveness and grace and love.

“I decided, after one or two years, that every single person who ever lived here had been created by God specifically to reveal to me one of my weaknesses,” he said. “It was all a part of the Lord’s way of making us whole.”

Terry Mattingly leads GetReligion.org and lives in Oak Ridge, Tenn. He is a senior fellow at the Overby Center at the University of Mississippi.