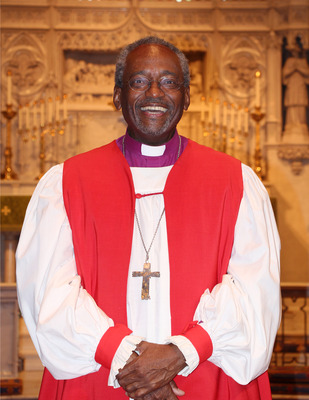 What awful, blasphemous and wolf-ish act had the Bishop done? He wrote a letter to the clergy in his diocese instructing them not to perform same-sex marriages.

How did it get to this point?

The Episcopal Church of the USA, which is overseen by Presiding Bishop Michael Curry, speaker at the Royal Wedding in 2018, and part of the worldwide Anglican Communion, has embraced liberalism for a number of years. In 2003, the church ordained Gene Robinson, an openly practising homosexual, as a Bishop of New Hampshire. In 2012, the church authorised liturgy for the blessing of same-sex unions, and in 2015 they entirely capitulated and redefined marriage, eliminating language that defined marriage being between a man and a woman, and allowing same-sex ‘marriages’ to take place in their churches.

When same-sex ‘marriages’ were introduced, Bishops were allowed to decide for their dioceses whether they would allow gay marriages or not, but this changed in 2018 with the passing of Resolution B012. It said:

This is saying if an orthodox Bishop does not support gay ‘marriage’, they must make every effort to find alternative provisions so that gay weddings can take place in their diocese.

Bishop William Love responded to the passing of the resolution with a faithful, Biblical, and bold pastoral letter to all the clergy of his diocese. He wrote:

Because of the pastoral letter and his refusal to back down, disciplinary measures were launched against Bishop William Love. Last week he was found guilty. A hearing will be scheduled this month to determine the terms of discipline.

Although we are thankful for Bishop William Love’s bold stand against liberalism, why is the liberalism of the Episcopal Church of the USA tolerated by the rest of the Anglican Communion?

But this was simply ignored. In 2018, Presiding Bishop Michael Curry was invited to speak at the Royal Wedding; could there have been a greater endorsement of his false ministry?

In fact, Presiding Bishop Michael Curry has overseen and endorsed the disciplinary case against Bishop William Love. There has been much controversy and division within the ECUSA in recent years including under Curry’s leadership. Since the ECUSA has drifted into liberalism, many orthodox Anglicans have left the ECUSA to find alternative oversight. Many faithful Anglican churches, wanting to break away, have been involved in long litigation suits where the ECUSA has sued them for their buildings and this continues to happen under Michael Curry. Meanwhile, his new book, ironically titled “Love is the way” is endorsed by Justin Welby, why? Why aren’t the Episcopal Church USA expelled from the Anglican Communion for their apostasy and heresy?

Scripture is clear we are to guard against the false teachers in our midst (Matthew 7, Acts 20, 2 Timothy 4, 2 Peter 2 and others) and to stand guard. But we seem to be welcoming them in. If more liberalism is tolerated in the Church of England, we will be on a similar journey as the Episcopal Church USA.

By promoting Presiding Bishop Michael Curry, Archbishop Justin Welby is promoting and endorsing someone who is toxic to the gospel, to the Church and to the cause of Christ. God does not call us to ‘good disagreement’ for those who preach another gospel, and we should not believe the lie that we can work together, that there can be ‘mutual flourishing’. Liberalism should not flourish, it should die. The Church of England is sadly on a similar trajectory, accommodating false teachers leading people astray under the demonic lie of ‘mutual flourishing’. Where is the bold leadership in the Church of England that will condemn the ECUSA, who will stand up for the truth of God’s word and the Gospel? When the Church of England made a clear statement on sex being reserved only for Biblical marriage earlier this year, the backlash from the world, and from within the church itself, pushed them into apologising for stating God’s truth.

We thank Bishop William Love for his faithful and bold stand, and we praise God for his ministry in the Diocese of Albany.

What Michael Curry and the ECUSA wanted of Bishop William Love was not to “conduct gay ‘marriages’ himself” but to condone them by allowing them in his diocese. Faithful clergy here in the Church of England – and there are many – must resist the temptation to take the easy option of allowing gay marriages in their churches by other ministers, or to submit to Bishops who allow gay marriages in their diocese, or to partner with those who preach another gospel. Same-sex ‘marriage’ is not something for us to turn a blind eye away from – we should oppose it and oppose sin in our midst.

Bishops in the Church of England are asked at their consecration:

Bishop William Love is being punished for doing just this, for being faithful to God and his word, and for keeping his vow.

Let us pray that more Bishops will have the courage to do the same.