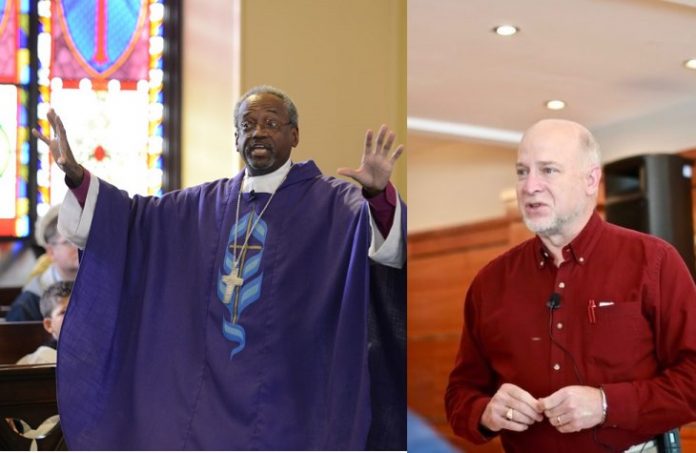 A traditionalist bishop who opposes same-sex marriage rites in the church has been found guilty by a Hearing Panel of failing to abide by the Discipline and Worship of The Episcopal Church in violation of his ordination vows.

The decision comes nearly two years after Episcopal Diocese of Albany Bishop William H. Love directed clergy resident, licensed, or canonically resident in the diocese (serving elsewhere) not to use trial rites solemnizing marriages between persons of the same sex.

In a letter to his diocese, Love writes that a separate hearing will be scheduled within the month to discuss the terms of discipline to be carried out.

“Until then, we don’t know what actions will be taken. Whatever the final outcome, it will severely impact not only me and the ministry entrusted to me as Bishop of Albany, but it will also seriously impact the life and ministry of the Diocese,” the upstate New York bishop writes. “I continue to pray that somehow God will use all of this for His purposes.”

The Hearing Panel has issued a 42 page document outlining the decision, which the Albany Diocese has made available on its web site here.

Love has cited his obligation as a bishop “called to guard the faith, unity, and discipline of the Church” among several reasons for his decision against implementing the rites. The bishop characterizes the dispute as part of his dioceses’ “faithfulness in upholding God’s Word.”

Access to “provisional” same-sex rites was originally at the discretion of diocesan bishops, but the dispute began after the church’s General Convention meeting July 5-13, 2018 in Austin, Texas, passed Resolution B012. The resolution mandated dioceses provide access to same-sex trial rites over the objections of a diocesan bishop who does not agree with same-sex marriage.

Episcopalians have steadily embraced same-sex unions, first consecrating an openly partnered gay bishop in 2003, followed by a bishop in a Lesbian relationship in 2009. Bishops in same-sex partnerships have since been elected and consecrated to lead dioceses in Maine, Michigan and Missouri.

A small minority of Episcopal Church diocesan bishops teach a traditional understanding of marriage between a man and a woman. However, Albany is the only remaining domestic U.S. diocese to prohibit clergy from presiding at same-sex rites. Several Episcopal dioceses in Latin America and the Caribbean have similar policies, but are unaffected by Resolution B012 as same-sex marriage is not recognized in civil law where they minister.

Orthodox clergy and laity argue that a “cancerous theology” has been exported from the Episcopal Church into the wider Anglican Communion, of which it is a part. Same-sex rites, they insist, are merely a presenting issue, pointing to deeper disagreements about the identity of Jesus Christ as the unique son of God and the role of scripture as authoritative.

Love argues that the Episcopal Church Book of Common Prayer still upholds marriage as between a man and a woman and that Resolution B012 was not a properly constituted revision.

Ordination of clergy openly in same-sex partnerships first occurred in the liberal Diocese of Newark, New Jersey in the late-1980s, although unofficial LGBT caucuses have advocated within the Episcopal Church since the 1970s.

In 2012, Episcopalians authorized a “provisional rite” for the blessing of same-sex unions. That rite included an option for bishops in states where same-sex marriage was permitted to exercise “generous pastoral response” and allow use of the rite for same-sex marriage. In 2015, bishops and deputies to the General Convention authorized a gender-neutral marriage rite that officially brought same-sex marriage to the then-1.8 million-member denomination.

Passage of Resolution B012 in 2018 was the most recent step, completing the transition from optional to mandatory.

“Where orthodoxy is optional, orthodoxy will sooner or later be proscribed. Some otherwise bright people have indicated their puzzlement with that axiom but it seems to me, well, axiomatic. Orthodoxy, no matter how politely expressed, suggests that there is a right and a wrong, a true and a false, about things. When orthodoxy is optional, it is admitted under a rule of liberal tolerance that cannot help but be intolerant of talk about right and wrong, true and false. It is therefore a conditional admission, depending upon orthodoxy’s good behavior. The orthodox may be permitted to believe this or that and to do this or that as a matter of sufferance, allowing them to indulge their inclination, preference, or personal taste. But it is an intolerable violation of the etiquette by which one is tolerated if one has the effrontery to propose that this or that is normative for others.” REVEAL COMMENTS