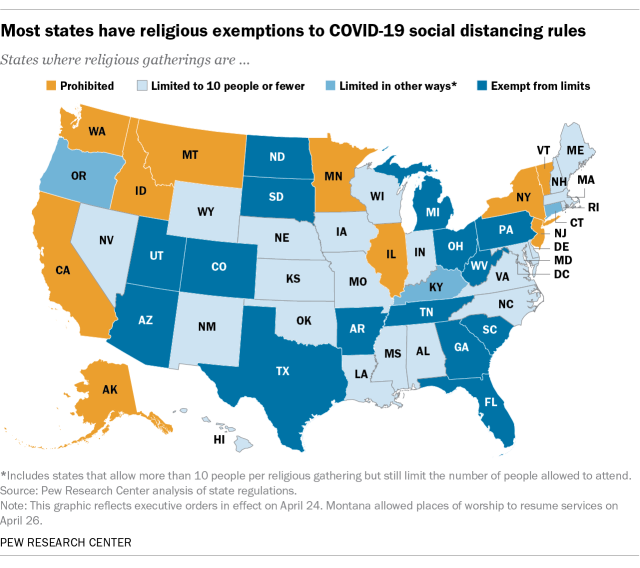 In an effort to slow the spread of the coronavirus, every state in the United States has issued guidelines or orders limiting social interaction. But these rules don’t always apply evenly when it comes to in-person worship services and other religious gatherings.

In fact, only 10 states are preventing in-person religious gatherings in any form, according to a Pew Research Center analysis of recent state-level regulations. The list includes California, where a group of churches are suing Gov. Gavin Newsom in federal court over what they claim is a violation of their First Amendment right to free exercise of religion. A federal judge last week rejected their request to hold services.

How we did this

Perhaps with such litigation in mind, most other states have carved out exemptions for religious gatherings in their stay-at-home orders or other directives in an attempt to balance religious freedom concerns with safe social distancing practices. The Centers for Disease Control and Prevention (CDC) continues to recommend that gatherings of more than 10 people be canceled, while in gatherings that do take place, individuals should remain at least 6 feet apart at all times.

In some cases, states have deemed religious worship “essential,” in the same category as food shopping and health care. These states include Florida, South Carolina and Tennessee, among others.

Roughly a third of states (15) are allowing religious gatherings to continue without any limit on their size.

Twenty-two states and the District of Columbia have specified in their orders that religious gatherings can take place, but only if they are limited to 10 people or fewer. This includes Rhode Island, where gatherings are limited to no more than five people. Two additional states, Connecticut and Oregon, limit religious gatherings to 50 and 25 people, respectively. Kentucky, meanwhile, is prohibiting “mass gatherings” – including faith-based ones – but does not specify how many people constitute a mass gathering. (This analysis only examines state-level regulations as of April 24 and does not reflect changes in regulations after this date.)

In some cases, religious leaders have resisted state orders, holding services in defiance of warnings from officials. But many others have canceled services in an effort to comply with the CDC guidelines, despite state-level exemptions that could allow them to continue communal worship.

Some congregations have gotten creative, not only with livestreaming services online or on television but by holding “drive-in” religious services, where people can participate in services from cars that are spaced 6 feet apart, rather than inside a house of worship. To date, seven states explicitly allow this sort of gathering to take place, while many others encourage religious organizations to host services online.

Correction: An earlier version of this post miscategorized New Mexico’s rules. New Mexico’s order was revised on April 11 and now specifically requires houses of worship to adhere to the state’s guidelines prohibiting gatherings of more than five unrelated individuals. Consequently, the totals for states with no limitations and states that allow religious gatherings of 10 or fewer have been updated.