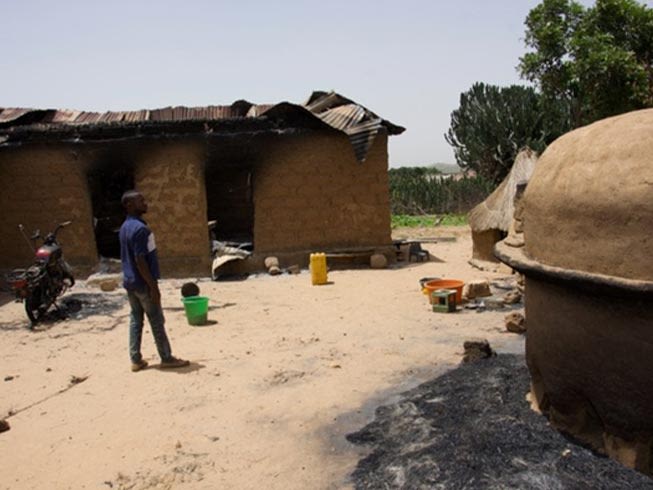 Another nine Christians were killed, including two young children and a pregnant woman, in a despicable Fulani militant attack on Hura village, Plateau State, on 14 April, as the Covid-19 lockdown continues in Nigeria.

The youngest victim was a three-year-old boy who died beside his pregnant mother, Talatu Daniel, who was also murdered. Also killed in the attack were five-year-old Ishaya Yakubu, Gyang Yakubu (16), Sunday Biri (50), Sunday’s grandson Luka (5), Spino Kama and two other unnamed adult victims.

Around 28 homes were burnt out or badly damaged in the Fulani militant attack on Hura, which affected most of the families in the village.

Victoria John, who is heavily pregnant, described her harrowing ordeal at the hands of the Islamist militants. “The Fulanis came and almost surrounded the village shouting in their language. Some shouting ‘Allahu akbar, come out, come out!’ amidst gunshots,” she said.

Victoria explained how she gathered what was left of her household belongings in a small sack before attempting to flee. She continued, “I was running together with another pregnant woman, whose child [five-year-old Luka], you saw the corpse on the way here … the child was screaming.” Both women managed to escape, but the child was killed.

The Christian community buried their dead loved ones in two graves, one at the west and another at the east side of the village

Around 39 families were affected by the attack, in which 21 homes were razed and seven badly damaged.

The community buried their dead in two graves on 15 April, before the surviving women and children began to evacuate the village in a ten-mile trek to another community in mainly Christian Kwall district.

Christian leader and regional chief, Ronku Aka, said, “With this coronavirus people are suffering, but this killing is more dangerous than the coronavirus. How many people have the coronavirus killed in this country? But this incessant killings is getting too much.”

A few days after the latest Fulani militant attack the women and children evacuated the stricken village in Kwall district, carrying what possessions they could

With the rainy season soon to arrive, the leader called for urgent help for the communities who desperately need food and materials to repair their homes. “The rainy season is approaching and my people whose houses have been burnt, where are they going to stay? I am calling on the government to have mercy and come to our aid.”

The callous attack came within weeks of similar Fulani militant raids, now surging under the current coronavirus curfew, that saw seven elderly Christians burnt to death and the murder of young pastor and father, Matthew Tagwi, in Kwall district.