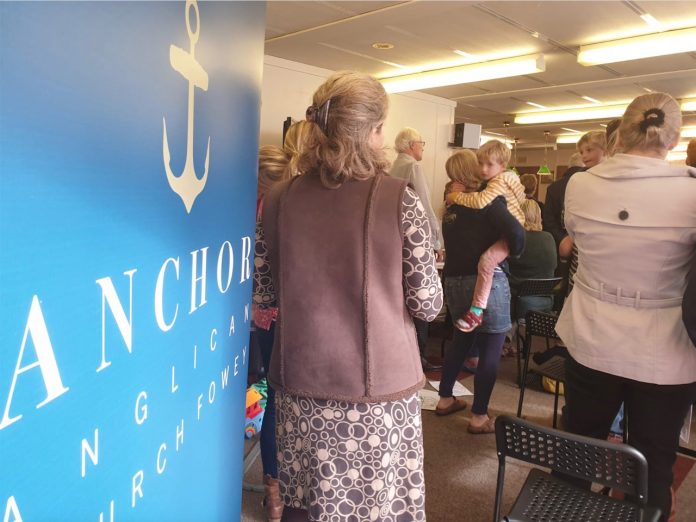 In the same way that many North Americans found a temporary ecclesial home in places like Nigeria, Rwanda, and Uganda, faithful congregations from the United Kingdom and Europe are now finding a canonical home in the Anglican Church in North America.

Fowey, England: population just over 2,300. The pronunciation is “foy,” rhyming with “soy.” It’s old. King Arthur old. Robert Bridges, the avant-garde poet laureate during the Cubism days, called Fowey “the most poetic-looking town in England.” Georgian and Medieval buildings congregate the hillside at the river mouth, bunched close like a small fortune of sheep. Shoulder to shoulder they stand as if each might be (understandably) elbowing their way atop for a sliver view of the harbor, envious of the little boats with their excess real estate to bob and sway freely atop the water below.

Fowey has served for centuries as a workaday seaport for the larger Cornish county. Being on the westernmost part of the southwest peninsula, she’s bustling in the summer months, much favored today by English holiday-makers and sailors alike. But come the New Year, boats abandon the river like keepers do their shops. Google it. No, go book an Airbnb any Saturday in January and see how incredibly successful you are. The internet presumes Fowey is nothing more than a “getaway.”

So, to be honest, before I traveled there, the town sounded more like superlative sabbatical material, not the next battlefield in the unfolding Anglican reformation.

Era depending, we all learned in school it has been places such as Babylon, Athens, and Rome, along with Paris, London, New York, and Tokyo that are the world’s leading culture transmitters. Vibrant cultural economies accessible to the global network, along with robust capital accumulation mechanize urban centers to dominate societal thought – from the geopolitical climate on out into the rural hinterlands. Yet in recent months it is the modest little Fowey that has taken the lead in England. Perhaps it should come as no surprise to us; if one spends any time in the Bible, it seems the Lord has a historical knack for using the small and unassuming.

Unlike some in the Global Anglican Future (Gafcon) movement, the issues surrounding marriage are not what brought Fowey to the table. It was baptism. The Church of England’s House of Bishops decided to release transgender guidelines in December 2018 offering the church celebratory material for use after one’s presumed transition between sexes. The choice of celebratory material was shocking. They chose the Baptismal liturgy.

Baptism, in its intended form, is a sign of death to sin and a new identity of a life unified and raised with Christ by His blood alone. The vicar of Fowey, the Rev. Philip de-Grey Warter quickly recognized the danger. “The guidance has the effect of denying the gospel,” he explained in August when I sat down with him and his wife, Naomi, at the vicarage in Fowey. “Now, whatever you think about the transgender [topic], folk in that situation nonetheless need a huge amount of compassion and understanding. The issue for me was that the House of Bishops were willing to allow Baptism to be used for something other than what it’s intended. We are a liturgical church, we express our doctrine and belief liturgically. So that’s an official thing. It says that truth is completely personal.”

So, after 17 faithful years, Philip stepped out of the Church of England on September 30. He is the first Church of England minister to leave with a substantial part of his parish to come under Bishop Andy Lines, Gafcon’s missionary bishop to Europe. In the same way that many North Americans found a temporary ecclesial home in places like Nigeria, Rwanda, and Uganda, faithful congregations from the United Kingdom and Europe are now finding a canonical home in the Anglican Church in North America where Bishop Lines is resident.

Philip and Naomi’s ministry will continue in Fowey with the planting of Anchor Anglican Church Fowey (AACF). “It’s business as usual,” he said, “seeking to proclaim the Lord Jesus Christ as faithfully and engagingly as I can in partnership with others.” Services will be held at The Mission to Seafarers, a longstanding institution of the port of Fowey. Guy Stickney, one of the four AACF trustees, described it as “a basic portacabin set up for sailors, hidden away on the edge of the town overlooking a public car park. I don’t think it’s been decorated for at least 30 years, but we are grateful.”

Equally appreciative of the space to meet, Philip says, “We won’t be constrained by ranks of pews all facing in one direction. Instead, we hope to create a more informal and relaxed extended-family atmosphere. It won’t matter at all if children want to wander. There will be toys available and an opportunity for them to enjoy a Bible activity of their own.”

The inaugural service on the first Sunday in October included a visit from Bishop Lines and recorded messages of welcome and blessing from various Gafcon congregations, bishops, and archbishops from around the world. “Our desire is to ensure that the good news in Jesus Christ is available in an orthodox and relevant way to future generations of Fowey residents,” said Dan Leafe, another of the four trustees.

And as for those evangelicals in the Church of England who are not sharing in Philip’s move, he revealed both reasonable frustration and humble appreciation. “There are folks who are determining to be biblical and faithful in their context [by remaining]. And if they are contending for the faith, then I absolutely respect them in that.”

A year prior to Philip’s departure, Archbishop Foley Beach visited the congregation to offer support. Regardless of one’s choice to leave or stay within the Church of England, Archbishop Beach called it a matter of conscience to be taken to prayer. “Gafcon offers hope to all faithful Anglicans,” he said reflecting on his time there. “Philip and his people have had the courage to refuse to compromise with a false gospel. I am excited for them as they seek to follow the Lord’s guidance and move forward in mission.”

Gospel grunt work and Kingdom advancement are coming out of a small holiday-makers town in the southwest corner of Cornwall. Faithful people in Fowey are living out their obedience to God, lured upward, wooed by God Himself to a Kingdom unseen, to bear up their crosses and think upon eternal years. This is a gain that far outweighs the cost.