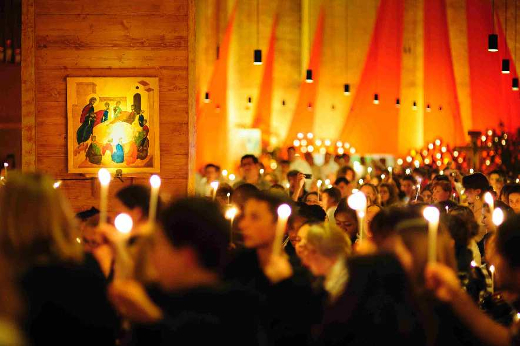 A week in a tent on the hard ground with a leaking air bed has reminded me to be grateful for my more usual bed and good mattress. I am revisiting old haunts this week. For twenty five years during my university teaching years, I brought some of my students to a French Monastery for a week in the summer.

We pitched  our tents and threw ourselves into  singing and praying with the 100 monks in the Taizé community in Burgundy several times a day. About three thousand young people came every week from all around the world to take part in this astonishing community. When we weren’t praying we were meeting each other in groups asking questions about managing our lives, and why the world was the way it was.

I have come back after a long gap. The first night my air mattress sprung a leak. On the up-slide, it gave me more time to think.

I’m doing my best to ignore the news this week, but I couldn’t filter it all out, so I found myself mulling over the C of E’s latest advice about living well on twitter. The C of E COMMS office gave us Ten Commandments for tweeting.

As always, some nice people have had some nice ideas which they want to use to make the world a nicer place.

“Together we can make change and help bring about a kinder world”  tweeted a former Times Religious Affairs correspondent in a wave of well meant enthusiasm.

This monastery I am at in Burgundy was born out the experience that making the world a kinder place was rather more problematic. Nice doesn’t fix the capacity for seriously destructive.

In 1935, six ex-theological students had made a small community to live in together in Burgundy , sharing their goods and punctuating the day with prayer. They didn’t know it, but they had settled in a place that was to straddle the fault lines of the deepest conflict.

It was situated right on the line between Vichy France on one side and the German occupied France on the other. After the war started  the monks began to give refuge to allied airmen shot down. They were denounced to the Gestapo, and fled before just being arrested, tortured and shot.

When they returned after the war to rebuild their community they took in German prisoners of war who needed feeding and protecting. One day, a group of French women from the village walked up the hill, grabbed some farm tools and killed one of the German ex-prisoners. It was a visceral act of revenge for their husbands and sons and daughters who had been tortured by the Gestapo. Nice it wasn’t

The fault lines of hatred went very deep. In the local village neighbours who had sheltered the Resistance lived alongside people who had shopped them to the Gestapo, who then executed their family members. More widely, the tensions grew out of the place straddling the border between the collaborating Vichy French and their occupied northern neighbours. The monastic community initially began with both Germans and French men, as well as including both Protestants and Catholics. Crossing such divides was unique.

The monks set out to create a place where people who had good reasons to hate and take revenge on each other found a fresh vision for mending their lives and communities. The key was the recognition of the existence and reality of evil; and forgiveness.

Recognising the existence of evil doesn’t sit well with our present cultural mood. We prefer the idea that anyone can be made a better person just by telling them not to misbehave, or be racist or sexist, and ‘re-educating’ them. So convinced are we by the power of education and the innate goodness of every person, that evil has more or less been written out of our social script; (excepting the occasional horror movies that some people turn to to give a dull evening a bit of frissance.)Instead we have undermined our sensitivity to moral issues, by insisting that right and wrong is a matter of personal preference (unless its racism, sexism or homophobia) and that  otherwise everyone is really quite nice, if sometimes misunderstood.

We have given up any sense that there is some ultimate truth by which actions can be judged in assuming that no one view is better than any other.

The monks thought that the old Christian view told more truth about the situation. They believed that otherwise good people could become corrupted by something morally toxic, and find themselves twisted out of shape by hatred, anger and revenge.

Experience of the twitter sphere makes it look that the that the monks might be right. Twitter can be a place of real good or real hatred. It can be a place  og great resource where  lucid truth can be told, and virtual friendships made. It can also be a place where the furies  of vituperation and rage are unleashed in a wave of electronic mob violence and hatred.

The Ten Commandments for tweeting might have been truer to the church’s founding principles  if they had also urged the twitterati  to ask for forgiveness for their own shortcomings and then offer that same forgiveness to those who had offended them. But that would be hard core. As Chesterton said, “The Christian ideal has not been tried and found wanting. It has been found difficult; and left untried.”