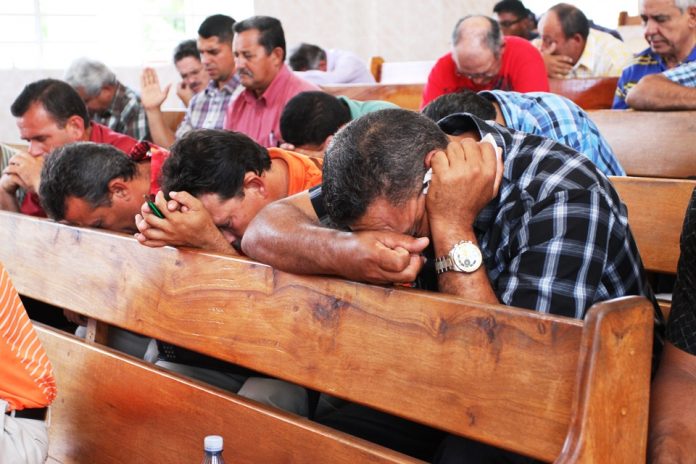 A major new report warns the persecution of Christians worldwide is spreading, increasing in severity, and has now reached levels approaching genocide – raising the risk of Christians being wiped out in the Middle East.

The Bishop of Truro has carried out an independent review for Foreign Secretary Jeremy Hunt on the persecution of Christians. Release International was among the groups that gave evidence for his interim report, which was released on May 3.

The report by the Bishop of Truro found ‘widespread evidence showing that Christians are by far the most widely persecuted religion’ and that religious persecution is a ‘global phenomenon that is growing in scale and intensity’.

The report continued: ‘Research consistently indicates the Christians are the “most widely targeted religious community”. Acts of violence… are becoming more widespread [with] an increase in the severity of anti-Christian persecution.’

The persecution of Christians in the Middle East and Africa had reached such a ‘vast scale’ that it is coming ‘close to meeting the international definition of genocide’.

The report continued: ‘The eradication of Christians and other minorities on pain of the sword or other violent means was… the specific and stated objective of extremist groups in Syria, Iraq, Egypt, North-East Nigeria and the Philippines.

‘An intent to erase all evidence of the Christian presence was made plain by the removal of crosses, the destruction of church buildings and other church symbols. The killing and abduction of clergy represented a direct attack on the church’s structure and leadership.

The report made the following stark observation: ‘The main impact of such genocidal acts against Christians is exodus. Christianity now faces the possibility of being wiped-out in parts of the Middle East.

‘Where these and other incidents meet the test of genocide, governments will be required to bring perpetrators to justice, aid victims and take preventative measures for the future.’

Release International, Open Doors, Aid to the Church in Need and Christian Solidarity Worldwide were invited to give evidence to the Bishop of Truro’s Review.

His report highlighted the findings of Open Doors that ‘approximately 245 million Christians suffer high levels of persecution or worse – 30 million up on the previous year.’

Release International CEO Paul Robinson has welcomed the report: ‘This is a timely wake-up call to government that Christian persecution around the world is rising, worsening, and has reached the scale where it can no longer be ignored.’

The report described a range of violent persecution. From mass violence expressed through the bombing of churches to the torture of Christians by the authorities, extra-judicial killings and the enforced and involuntary disappearance of Christians.

It warned of the increasing threat from ‘aggressive nationalism in countries such as China, as well as from Islamist militia groups.’ And it cited the example of India where, ‘there is a growing narrative that to be Indian is to be Hindu.’

The report went on to analyse the regions of the world, beginning with the Middle East and North Africa.

‘Forms of persecution range from discrimination to genocidal attacks against Christian communities. [These] have led to a significant exodus of Christian believers from this region since the turn-of-the-century.

‘A century ago Christians comprised 20 per cent of the Middle East and North Africa. Today they are less than 4 per cent.’

The report blamed the exodus on political failures in the Middle East, the shift towards more religiously conservative societies, persecution and discrimination against Christians, and atrocities by groups such as ISIS.

‘During the past decade… millions of Christians have been uprooted from their homes, and many have been killed, kidnapped, imprisoned and discriminated against.’

In South Asia, the report found, ‘the growth of militant nationalism has been the key driver of Christian persecution.’

It cited the growing rise of attacks against Christians and Muslims in Sri Lanka, culminating in the Easter Sunday bomb attacks.

It also warned of the gathering momentum to pass anti-conversion laws in countries such as India and Nepal.

The report emphasised Nigeria where Christians have been driven out by militant Islamists Boko Haram and Fulani gunmen.

Boko Haram had set out to ‘eliminate Christianity and pave the way for the total Islamisation of the country.’

The report continued: ‘In Nigeria, month after month, on average hundreds of Christians were being killed… In 2018, far more Christians in Nigeria were killed in violence in which religious faith was a critical factor than anywhere else in the world.’

Even in 2015, US intelligence reports were suggesting that 200,000 Christians were at risk of being killed.

The report also expressed concern about a ‘growing wave of attacks by nomadic Fulani herdsman in Nigeria’s Middle Belt.’

Kenya, Tanzania and Sudan were also named as countries of concern, along with Eritrea where ‘non-registered Christian groups bore the brunt of government-sponsored religious persecution.’

The report described extensive levels of persecution in East Asia where North Korea had been consistently considered the most dangerous country in the world for Christians for the past 18 years.

‘When Christians are discovered they experience intense interrogation, which normally includes severe torture, imprisonment or even execution.’

The report found that significant numbers of Christians in China were also at risk of persecution. In recent years President Xi had sought to control the church. As a result, the state has demolished churches and torn down religious symbols.

Laos, Vietnam and Myanmar (Burma) were among other areas of concern in the region. In Myanmar, non-Buddhists faced persecution.

As well as oppression by the state, the report observed, ‘the growing influence of Islamic militancy… is a key driver of the persecution of Christians in the region.’

Other regions under scrutiny included Latin America as well as Central Asia where, ‘the situation for Christians is bleak, as authorities have further enforced a widespread crackdown on churches and Christian activities.’

The report was, it declared: ‘calling out the inconvenient truth that the overwhelming majority – estimated at 80 per cent – of persecuted religious believers are Christians.’

The full report is due to be published in June, when it will make its recommendations for to the government. The Bishop of Truro is already flagging up the direction those recommendations might take: ‘The need for governments to give increasing priority and specific targeted support to this faith community is increasingly urgent.’

Foreign and Commonwealth Sec, Jeremy Hunt, who commissioned the interim report, described it in the media as ‘truly sobering’. He added: ‘We’ve all been asleep on the watch when it comes to the persecution of Christians. What happened in Sri Lanka on Easter Sunday has woken everyone up with an enormous shock.’