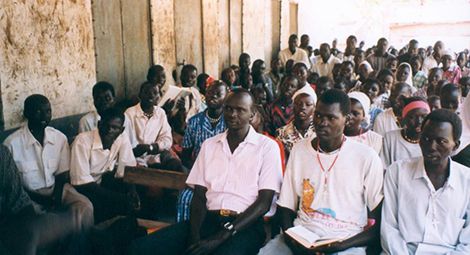 What has happened in Sudan since 6 April can leave no doubt as to the seriousness of the Sudanese people to dismiss a regime that has remained in power for 30 years through its dependence on the tools of dictatorship, kleptocracy, patronage, fear and wide-scale human rights abuse. Citizens in the hundreds of thousands went to the streets across the country on the 6th of April; a sit-in around the Sudan Armed Forces (SAF) and National Intelligence and Security Services (NISS) headquarters in Khartoum continues with unprecedented numbers of protesters gathered as we write.  Whole families have come, along with new social change movements, youth, women, traditional opposition groups, secularists, Islamists – all demanding change.

The people on the streets are determined to uproot the regime regardless of the cost. We the signatories call for a robust response from the international community to minimize the costs to Sudan and its people.  Alarmingly, the situation remains extremely volatile and much will depend on how the security forces respond over the next few days. There are already reports that the military has been ordered to clear the protestors, but up to now they have not responded.  At least nine deaths have been reported of innocent civilians at the sit-in by shots fired by special security police and/or NISS. The current sit-in and protests could lead to a scenario in which the armed forces enable a peaceful transfer of power to a transitional government made up of the signatories of the Declaration of Freedom and Change. Alternatively, a worst case scenario could see massive outbreaks of violence and human rights abuse perpetrated by the security forces, and increasing levels of instability and confusion. If the international community is keen on avoiding state failure in Sudan, now is the time for action.

The scale and scope of the sustained protests by wide sections of Sudanese society over the last 4 months should deliver a clear message that the time for deep political change is long overdue.  Many Sudanese were disappointed with the cautious response from much of the international diplomatic community, which seems at odds with their expressed interests in promoting peace, regional stability, human rights, economic progress, reduced demand for migration and countering militant fundamentalism. The crowds on the streets of Khartoum and in other cities are determined to sit-in until the regime leaves.    There have already been efforts by the organisers behind the protests to manage themselves across constituencies and to prepare for credible and inclusive transitional governance arrangements that could keep the country stable, while overseeing genuine national dialogue and constitutional reform. The international community can move to actively support peaceful, legitimate change makers to maximise the chances of arriving at positive outcomes. The massive response of Sudanese across the country to the calls for a peaceful movement to achieve democratic change should put to rest concerns about the legitimacy of this movement’s leadership, coherence, or preparedness to manage a peaceful national transition to democracy.

The international community has an opportunity to influence what happens next. A “sit back and watch” approach plays into the hands of the NCP and raises the chances of a worst-case scenario violent clampdown. Strong diplomatic action could increase the chances of a much more positive set of outcomes. We the signatories of this letter therefore call on your offices to urgently consider and act on the following recommendations to:

We also urge the international community to:

Appropriate and urgent action by your office could have a real and positive influence on what happens next. We urge you to act without delay.

Massachusetts Coalition to Save Darfur