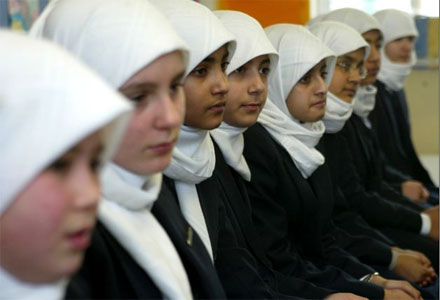 The parents’ uprising against the “No Outsiders” LGBT curriculum at Parkfield Community School in Saltley, inner-city Birmingham has spread to Anderton Park Primary School in Moseley, a Birmingham suburb after a 6-year-old boy from Year 2 told his parents he was forced to dress as a girl.

Muslim parents protesting outside the school yesterday and today from 3.15 to 3.45pm demanded the withdrawal of the “No Outsiders” programme and the resignation of headteacher Mrs Sarah Hewitt-Clarkson.

Shouting slogans like “Our Children our Choice,” “Let Kids be Kids” and “Hewitt-Clarkson step down,” parents and children of all ages held up posters saying “Adam and Eve, not Adam and Steve” and “Education not Indoctrination.”

Parents say the school has been teaching the pro-LGBT syllabus since November 2018 without any consultation. They insist their children are too young to be taught gay, lesbian, and transgender issues and there is no statutory requirement for the school to be teaching such subjects.

Parents became aware of LGBT textbooks being read to their children after the Parkfield Community School protests began in January 2019. There were reports that boys were being asked to dress as girls and children were being taught a story of a prince marrying another prince, leading parents to wonder if the same material was also being taught at Anderton, Mrs Shaida Rashid, mother of an 8-year-old in Year 3, told Rebel Priest.

Parents met after a 6-year-old boy went home in tears because he had been asked to dress as a girl the next day to participate in a play. “There are a few other books we found in the school that are ‘gay stories’ and they were also getting taught that it’s okay to have two mummies and two daddies,” another parent who wished to remain unidentified said.

Meanwhile, a mother contacted other parents after her 4-year-old daughter who came home from nursery and started playing with her doll said to her: “Mummy, can you come and be the second mummy.” The mother says she was angry and asked, “What do you mean? Mummy needs daddy, mummy doesn’t need another mummy.” The child responded, “No Mummy, it’s okay. We are allowed to have two mummies and you need to be the second mummy.”

The parents then issued a petition and collected over 200 signatures. They told to the Chair of Governors that the headteacher wasn’t taking their complaints on board. There have been two meetings at a local mosque and are a third meeting will soon be held, parents said.

Mrs Rashid says that Mr Richard Harris, a teacher, confirmed that the story “King and King” had been taught since last term. The story is about a prince who spurns a number of princesses and falls in love with another prince and the two get married. “I apologise if this story has made you angry, but I was told by the headteacher to teach the children this story,” Mr Harris reportedly told parents.

However, headteacher Hewitt-Clarkson denied the allegations in a letter dated 18 March 2019, insisting, “We do not teach children about sex, we never have and never will in future.” Parents said that this statement itself was problematic as the Relationships and Sex Education (RSE) would make pansexual education compulsory from September 2020.

“We do not have an LGBT programme or promote an LGBT ethos,” she stated. Nevertheless, she went on to explain that “we do promote understanding of all aspects of equality and talk to children about our society and the community we live in,” which, according to parents, is code for the “No Outsiders” lessons.

Hewitt-Clarkson also wrote that she and Mr Harris had a “great meeting with Mr Abdul Latif, an Imam from Evelyn Road Mosque about the issues that some people have currently.”

However, Mr Latif said he did not concur with Hewitt-Clarkson. “I am now seeing this letter sent to me via Whatsapp with my name on it which I gave no permission for, detailing and implying my agreement to what the school is doing overall—a matter of which I am obviously uninformed let alone agree with,” he wrote.

Mr Shakeel Afsar from Justice for our Children said that the parents have “tried their best to hold collective consultations with headteacher who refused to hold the meeting on the grounds of law and order situation” (sic). When parents have spoken individually to Mrs Hewitt-Clarkson she has repeatedly reassured them that “No Outsiders” was not being taught, they claim.

Sources told Rebel Priest that Mrs Hewitt-Clarkson called the police yesterday even though the demonstrators were protesting peacefully. Two police cars arrived just as the protests were ending and police said they would allow the protests to go ahead.

Many of the parents say their have written letters to the headteacher reminding her of the Human Rights Act 1998 which affirms that “The State must respect the rights of parents religious and philosophical convictions in respect of education and teaching.”

Parents say they intend to protest daily until “No Outsiders” is withdrawn or collective consultations are held with parents or Hewitt-Clarkson is removed as headteacher from the school. Sources say that Sikh and Romanian Christian parents are also supporting the protests.

Rebel Priest contacted the school by phone and email and was told the headteacher would call back. So far, there has been no response from the school. “There has been concerning behaviour from a few parents over the last few days and it must change,” reads a notice from the school’s newsletter dated 28 February 2019.

Rebel Priest has also contacted the Lambeth Palace for comment asking if Justin Welby, Archbishop of Canterbury, would support the parents after Welby spoke at an interfaith gathering stating: “For British Muslims who are feeling under threat, we are with you….We will work with Bishops in the Church of England to see how we can be more effective in visible signs of togetherness.”

Earlier, David Urquhart refused to support Muslim parents who approached him stating that l stated that the diocese expected church schools “to address the requirements of the Equalities Act, recognising that it is a requirement of the law to prepare our children to live in modern day Britain.”