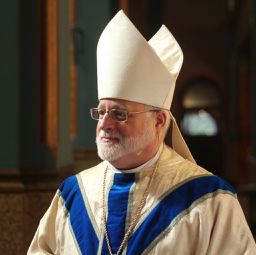 A New York State Supreme Court judge today dismissed substantially all the claims in a lawsuit against the Domestic and Foreign Missionary Society (DFMS), the corporate name of The Episcopal Church, filed by Bishop Stacy Sauls, who was removed from his post as chief operating officer in April 2016.

Sauls’ suit against the DFMS and an unspecified number of unnamed defendants associated with the church claimed that the church’s decision to replace him as chief operating officer breached Sauls’ contract, damaged his reputation and made it difficult for him to find a job elsewhere in the church.

Judge Paul A. Goetz found that Sauls’ contract was not breached because he was an “at will employee;” and that “nothing in the [DFMS] handbook limits the defendants’ right to terminate plaintiff’s employment for any reason.”

Goetz dismissed the claim of defamation because the one-year statute of limitations had lapsed. Sauls argued that the statute was retriggered by the re-publication of allegedly defamatory material. However, Goetz said the more recent claims did not meet the standard of re-publication because it failed to identify “‘the particular words complained of’ nor specify ‘the time, the manner and the person to whom the publication was made,’ nor identify the person who made it.”

The judge also dismissed Sauls’ claim for indemnification for legal fees related to the suit he filed against DFMS.