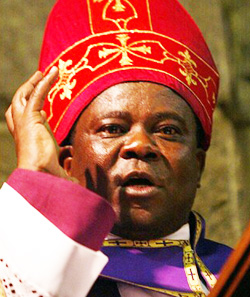 The Zimbabwe Supreme Court has ruled the wife of former Bishop Nolbert Kunonga had submitted fictitious invoices to establish claim to 50 head of cattle that had been seized by the Church of the Province of Central Africa (CPCA) to settle the debts owed by the former Harare bishop. In a ruling handed down last week Justice Mary Zimba-Dube held that documents submitted by Mrs. Kunonga to prove she, not her husband, owned the cattle, were suspect.

In November 2012 the court ordered Bishop Kunonga to return the diocese’s properties to the CPCA and to reimburse the church $428,000. Dr. Kunonga appealed the ruling, but on 17 March 2017 Justice Paddington Garwe rejected Dr. Kunonga’s claim that he had the right to sell stocks and shares owned by the Diocese of Harare.

The unsuccessful appeal followed a 18 Nov 2015 decision by Harare High Court Judge Nicholas Mathonsi ordering Dr Kunonga and four others to pay the $427,892 plus interest and court costs to the Diocese of Harare.

In 2007 Dr. Kunonga withdrew the diocese from the Church of the Province of Central Africa to form the Anglican Church of Zimbabwe after the province began ecclesiastical proceedings to investigate the controversial bishop on charges of fraud, heresy and attempted murder. Dr. Kunonga, who was an ally of the ruling ZANU-PF Party and President Robert Mugabe — who rewarded him with an estate confiscated from a white farmer — used the power of the state to expel congregations and clergy from churches that did not pledge their loyalty to him.

Dr. Kunonga was joined by the Bishop of Manicaland, the Rt. Rev. Elston Jakazi in the schism, dividing the Anglican Church in Zimbabwe. A series of lower court victories in favor of the the Rt. Rev. Sebastian Bakare — the bishop seated by the province after Dr. Kunonga’s excommunication — were ignored by the security services. But in 2012 the Supreme Court ruled in favor the Province against Dr. Kunonga, and the government removed its protection from the breakaway bishop.

The lower court ruling stated that when Dr. Kunonga quit the Church of the Province of Central Africa, he lost control over the church’s assets. “From the time the first defendant and his followers resolved on August 4 2007 to secede from the plaintiff church, they ceased to have any right over the property of the plaintiff they previously controlled or held in trust.”

After the 2017 ruling attorney’s for the province issued writs of possession for farm equipment and other assets owned by the ex-bishop. However, Dr. Kunonga’s wife filed an interpleader with the court saying she had purchased the family’s cattle herd, offering two invoices as proof of the transaction.

On 1 March 2019 Justice Zimba-Dube ruled: “The invoices do not conclusively prove that the claimant bought the cattle and that they belong to her and not the judgment debtor,” noting she believed the “sales are a fiction and the invoices were forged. The documents smack of collusion with the judgment debtor.”