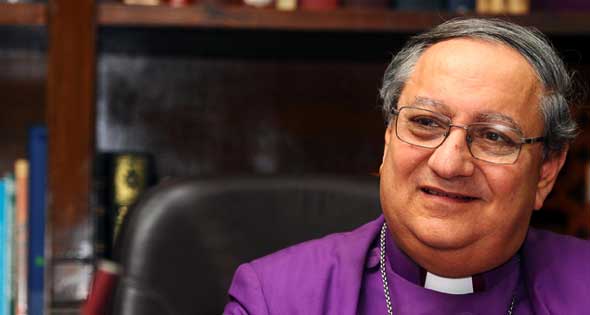 Six Primates voted for no consequences and a simple rebuke, but the overwhelming majority, thirty Primates, voted for some form of consequence of varying severity.

I must confess that as the time neared for the Primates’ Meeting, I became worried and anxious. The reason for this is that I am convinced that the Anglican Communion is God’s gift and value very much the unity among provinces. And yet I was torn because the unity I value should not be at the expense of the truth. After a lot of prayer, and because of the prayer of many of our friends, I found an outstanding Peace. The Lord spoke to me and reminded me that He is the head of the Church, not me. He has promised that even the gates of Hades will not overcome His Church. I went to Canterbury with this Peace filling my heart, not knowing what was going to happen, but trusting the true head of the Church to enable us to continue to be faithful to Him.

As I reflect now on the Meeting, I have come to the following points.

I. Why This Meeting Was Different from other Meetings

This Primates’ Meeting was very different from the previous ones in the following ways.

I can safely say this Meeting was different because it addressed the real issues.

II. Division Versus Walking Together

The Primates have seen that the “change in their [TEC’s] Canon on marriage represent a fundamental departure from the faith and teaching held by the majority of our Provinces on the doctrine of marriage”. The standard teaching of the Anglican Communion on human sexuality and marriage is found in Lambeth 1.10 in its entirety. This was affirmed by two Lambeth Conferences, several Primates’ Meetings, the Windsor Report, and the Windsor Continuation Group.

Some of the Primates came with the desire to walk apart; those who support same-sex marriage in one direction and the others who do not in another. On the other hand, there were those who believed that the issue of same-sex marriage is not a core doctrinal issue and hence is not an essential of faith. These are the two ends of the spectrum.

In the middle, however, there are Primates who are aware that within TEC and Canada, there are people who hold the standard and acceptable teaching of the Anglican Communion in regard to the issue of human sexuality. Any kind of complete exclusion will affect these people. These Primates in the middle believe in diversity, but not unlimited diversity: diversity on the non-essentials and unity on the essentials of faith like the authority of the scripture.

We had a frank and gracious discussion about how each of us felt and how the issue at hand had affected our respective provinces. We then moved on to consider the way ahead. I shared a thought I had had prior to the Primates Meeting of 2011. This idea was to create a “distance and continuous dialogue”. In other words this would create a space for contemplation without tension as a first step towards restoring our Communion. It does not involve excommunication of TEC, but limits their full participation in the Anglican Councils for a period or space.

When we shared this with the rest of the Primates, they wanted to know the nature of this distance. As a result, the Archbishop of Canterbury appointed a balanced working group to work out a proposal, which you can now see in the Communiqué.

IV. Various Reactions and My Appeal

Two different kinds of reactions arose after the release of the Communiqué. Some reacted with outrage and others with triumph. Sadly I found little grace in these reactions. I recalled the compassionate words of Jesus in Luke 13:34, “Jerusalem, Jerusalem, you who kill the prophets and stone those who were sent to you! How often I have wanted to gather your people just as a hen gathers her chicks under her wings. But you didn’t want that”. I feel that we need to pray so that we may have such Christ-like compassion.

I appeal to everyone to spend this coming three years in a more constructive contemplation on how to restore our impaired Communion. How can we move ahead and advance the mission of our Lord? What kind of suitable structure can we have to guarantee that we will not be distracted away from the purpose God has put before us? Let us not think in terms of triumph and defeat, instead we have to fix our eyes on Jesus, the author and the perfecter of our faith.

I am aware of those who challenge the authority of the Primates to make decisions. I would say that the decisions of the Primates’ Meeting as they appeared in the Communiqué, are not new, they are “consistent with previous statements” from the different Instruments of Communion. I will be responding to this issue in more detail in the near future.

V. A New Atmosphere and Spirit

Once we decided on the consequences for the actions of TEC, we started to discuss other issues. The spirit in the room had changed 180 degrees. It was amazing and tremendously encouraging to hear the passionate discussion about mission and evangelism, the challenge of refugees, religiously motivated violence, and environmental issues. It was a real joy for me to witness the different Primates sharing on how the Lord is at work in their provinces and how their churches are growing. I felt that this is the Anglican Communion I love.

VI. A Journey to Build Trust in the Instruments Begins

I feel now a journey has just begun in order to restore the trust in the Instruments of Communion. This trust was lost because of the reluctance to follow through on the recommendations of previous Lambeth Conferences and Primates’ Meetings. We have now a real opportunity to follow through the recommendations of this Primates’ Meeting. In addition to this, we have a good space to discuss the best possible shape of our Communion that would guarantee the expansion of the Kingdom of God.

I should mention that the last foot-washing service was very humbling and moving. At that time, I realised I should be more aware of my weaknesses as we address weakness in others.

VII. A Word of Thanks

I would like to thank Archbishop Justin Welby for his leadership of this historic meeting. I also would like to thank Archbishop John Sentamu whose contributions helped a lot in reaching a conclusion. I am also grateful for all my colleagues who persevered in order to reach what we reached and to move ahead with our Communion. I also must not forget the supporting staff of the Archbishop of Canterbury who worked around the clock to serve and help us.