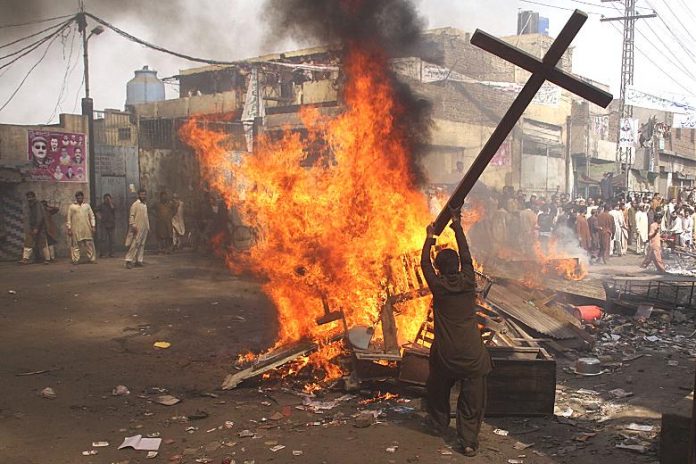 Ever since, 2012, when the extremist elements during a protest procession against the blasphemous cartoons publication by Western Media burnt St. Paul’s Sarhardi Church, Mardan, the Christian communities have been under constant attacks, threats and siege. All these incidents have left a permanent scar on the memory and soul of the Christian community of Pakistan.

The worst of these incidents was the twin suicide bomb attacks on All Saint’s Church Peshawar; followed by many other incidents of burning Christian Colonies , attacks on Churches, extra judicial killings of Christians allegedly blamed for blasphemy, and burning of Christians alive , etc, etc. The recent incident of suicidal bomb attacks on two Churches at Youhanabad, Lahore is of its own kind, regarding peculiar developments after the attack.

The fact of the matter is that two Churches were almost simultaneously attacked in the same vicinity, leaving 17 dead on the spot, and 70 badly injured. It is true that some mysterious, and/or planted personal/elements behaved irrationally after the attack, but now, the various Political Parties along with some religious extremist groups and some non-State actors are involved in point scoring games, and personal vendetta against the Christian community of Youhanabad, Lahore. So far, hundreds of Christians have been arrested and tried at the various courts, for the crimes they never committed.

There are rumors that a group of extremist from Kasur, Punjab and a similar sort of group from Sargodha, Punjab are planning to attack Youhanabad, to avenge the death of two suspected persons, present at the crime scene at the date, and time of bomb attacks at the Churches.

In fact, this fire of hatred and vendetta started the very next evening of the Church attacks. A large number of people of the majority community attacked Youhanabad. As a result Army Rangers were deployed to protect inhabitants of the Christian colony. Now, the groups from the above mentioned groups, are waiting like a wild animal in a jungle, to attack its prey.

These groups of extremists perfectly know that the Rangers will not be there forever to protect the Christian community. The truth of the matter is that the Christian community of Pakistan has always been, and will be vulnerable and defenseless in the future as well. The worst, or the mother of threats has come from the Taliban. They have openly threatened to blow-off the whole of Youhanabad. Many have started to vacate their houses for secure vicinity.

At one hand, all these threats, incidents of violence and targeted persecution dishearten the Christian community of Pakistan, but on other, it has strengthen the faith and refurbish their commitment of faithfulness with Lord Jesus Christ.

The Holy Week is on and every Christian soul, young or old feels the ‘pain and beyond’ borne by Jesus Christ for our sins on; the Cross at Calvary. It teaches us to forgive, and gives us a strength to bear the agonies in this world for His name’s sake. Now, it has been many years that the Christian community is going through one tragedy after another, therefore; they have not been able to celebrate Christmas or Easter with traditional pomp & show. However, the true celebration comes from the heart, and the heart tells us that we are lucky to be Christians, and our life in this region is a constant journey on the ‘Road to Calvary’.